Jan. 6 panel made the case against Trump 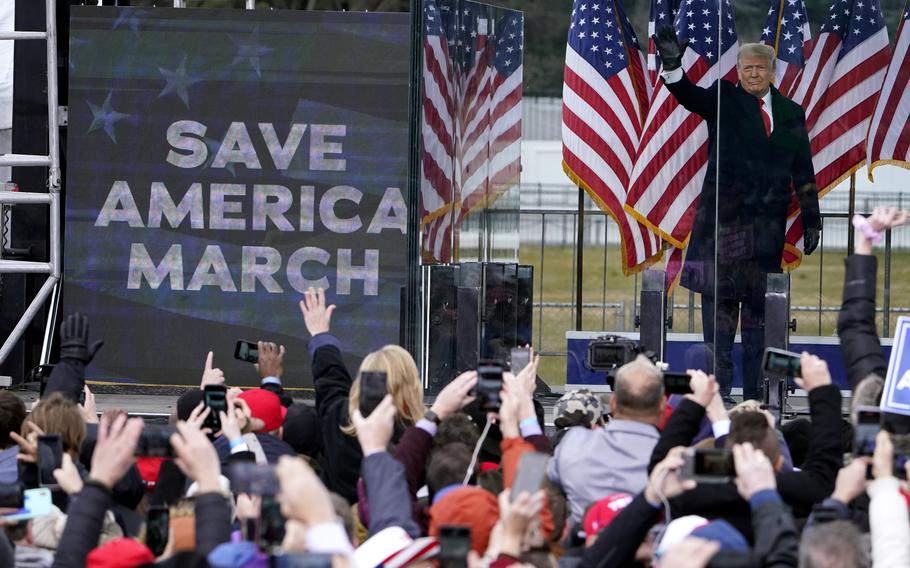 President Donald Trump arrives to speak at a rally in Washington on Jan. 6, 2021. (Jacquelyn Martin/AP)

At long last, the House Jan. 6 committee held its first hearing, and made it a pretty good one. Right at the top, Chairman Bennie Thompson gave us the right wording: Former President Donald Trump’s actions and those of his associates were an effort to “overthrow the government.” That’s what this is all about. That’s why the investigation is so important; it’s why the public side of the committee’s responsibilities are so critical. If the committee is correct, then this was among the most heinous and disloyal actions by a president in the history of the U.S.

In the two-hour, prime-time session, the committee members only outlined the case that they’re making — what Rep. Liz Cheney, one of two Republicans on the panel, called a “sophisticated seven-part plan” by Trump to overturn the election. Thompson and Cheney were clear: While the violence of Jan. 6 was part of the plan, no one should think that the attack by itself was the central story line.

One was that everyone inside Trump’s White House and his campaign knew that he had lost; that there was nothing to any of the wild stories of fraud; and that they all told Trump exactly that. This may be important for any legal case against the former president or his allies, since it shows that they knew what they were peddling was false. It’s also useful in understanding the bigger picture. The truth is, there was nothing extraordinary about the 2020 election. It was close, but not especially so. If anything, it was unusually clean. The professionals on the campaign and Trump’s legal team knew it, and told him so. Claims to the contrary not only amounted to a lie, but a lie in service of overturning the government.

The second point was that Jan. 6 wasn’t just the spontaneous action of a mob. It was an organized attack by extremist groups that had been egged on by Trump. It’s still not clear whether Trump and his allies actively coordinated the mayhem, or just recklessly invited it. But Trump in particular certainly did invite it, and once the violence began he refused multiple entreaties to use either his official position or his influence with the mob to put an end to it.

As for the presentation: Video of the attacks, live testimony from a Capitol police officer who had been brutally injured, and snippets from the depositions the committee has conducted made for compelling television. Of course, most voters weren’t watching. But it was never a realistic goal to entice a large audience to watch gavel-to-gavel coverage. What the committee members needed to do was to convince key elites — the non-aligned media, high-visibility Republicans who aren’t entirely comfortable defending Trump, and any skittish Democrats — that this is all extremely important. The more successful they are in doing so, the more the hearings will become a continuing event, with people being exposed to it in news coverage and social media and everywhere else. It’s likely that the committee took a big step toward achieving that on Thursday.

These hearings are unusual in that the minority party is represented only by two members (out of nine) who are defying their own party’s boycott. That means the whole thing can be as scripted as the committee chooses, without interruptions from the minority or attempts to debunk or reframe what’s happening. In that sense, the boycott has been a tremendous gift to the committee. There was no squabbling over rules or procedures, no objections, no complaints about etiquette — nothing that would make it easy to bash the whole thing as partisanship. Helping things further? Seven committee members, everyone but Thompson and Cheney, were willing to sit quietly throughout the session. Presumably everyone will get a turn to shine over the five remaining hearings, but very few politicians are willing to sacrifice an opportunity to be seen by a prime-time audience. And that in turn helped to emphasize the seriousness of the occasion.

I hope that the committee plans quite a bit of live testimony in the daytime sessions; the clips from taped depositions can be effective, but they’re not nearly as gripping as watching full answers, especially by people who once appeared to be loyal to the former president but now are telling the truth about him. We’ll see what they have soon, with three daytime sessions this week beginning on Monday morning. And yes, I do think this would all have been more effective months ago, and with more time. We had several short clips Thursday night from rioters; I could easily imagine two weeks of testimony walking them through the entire thing.

Perhaps the most effective moment of the hearing came from Cheney, who talked about the portrait in the Capitol rotunda of George Washington resigning his commission at the end of the revolution. Washington’s action made him world famous; he could have been king of the new nation, but he rushed, as the painting shows, to give up power as soon as it was safe to do so. Even more astonishingly, he managed to repeat the act by retiring from the presidency after two terms, setting an example that lasted for more than a century and was so powerful that when Franklin Roosevelt shattered the precedent the response was eventually to put the two-term limit into the Constitution. The contrast with Trump, who refused — still refuses — to accept the verdict of the people in a free and fair election, could not be stronger.