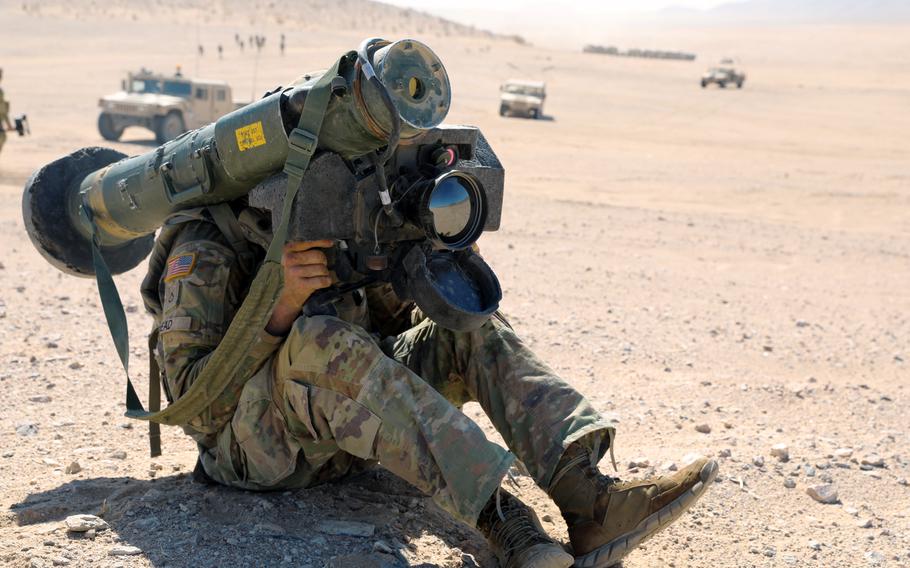 Since the start of the war in Ukraine, no weapon has been more effective against Russian forces than the Javelin anti-tank missile. Drawing on a supply of roughly 7,000 U.S.-made Javelins, Ukraine’s fighters have destroyed at least 400 Russian tanks and hundreds more armored vehicles. The weapon’s potency has helped foil President Vladimir Putin’s plans to overrun the country. There’s just one problem: The U.S. stockpile is now running out.

The war has already consumed as much as one-third of the U.S. military’s inventory of Javelins. Within months, the Pentagon will be unable to deliver new ones without emptying out its own supply. The war has also consumed one-quarter of the U.S. inventory of Stinger shoulder-fired anti-aircraft missiles; Raytheon, which makes the Stinger, says it could take up to a year to restart production. (The Army has issued a $625 million contract to Raytheon to do so.) At the current usage rate, supplies could be nearly exhausted by next year.

A $40 billion spending package passed by Congress last month aims to replenish these stockpiles. But the problem goes deeper than short-term supply disruptions. Military planners and defense contractors have long prioritized spending on big-ticket “platforms,” such as aircraft carriers and fighter jets, over making weapons themselves. Pandemic-related disruptions in the supply chain for microchips have made the problem worse. And the erosion of the military’s industrial base has made it harder for the Pentagon to accelerate production. Defense-industry concentration, cumbersome contracting rules, and a shortage of skilled workers have slashed the number of companies in the business. A 2020 Pentagon report found that in an alarming number of cases, the military relies on a single, “often fragile” supplier to make critical components.

The weakness of the Pentagon’s supply chain threatens not only aid to Ukraine but also America’s ability to respond to future crises — including a potential conflict over Taiwan, whose military depends on U.S.-made hardware. To address the current strain, President Joe Biden should consider invoking the Defense Production Act, which requires manufacturers to prioritize delivering goods for defense-related needs over orders from other industries. Although sometimes misused for political purposes, the authority could in this case help to ease production bottlenecks for military vehicles and heavy weaponry.

Fixing shortages of specialized items — like the chip-powered sensors that help precision-guided weapons find their targets — will take longer. In the meantime, the U.S. should encourage NATO allies to provide their own anti-tank and anti-air systems to Ukraine and expand shipments of newer, low-cost weapons, such as “loitering” drones.

Preventing future shortfalls requires broader reforms. The Pentagon should streamline the acquisition process to attract more nontraditional vendors, which could encourage innovation and broaden the industrial base. Programs to identify promising military technology companies and connect them with investors should be expanded. The U.S. should share technology with allies that have spare manufacturing capacity, such as Australia, to bolster collective stockpiles. Congress should do its part by passing military funding bills in a more timely fashion and authorizing the Defense Department to issue longer-term contracts to weapons suppliers, which would allow them to invest in added capacity.

As for the companies themselves? They have a special responsibility too. They’re working with taxpayer dollars in service to the national defense. Contractors should be accountable for when stockpiles run low and keep production equipment ready to go when the need arises. All this should be part of the deal.

Biden has highlighted the country’s military support for Ukraine as a sign that the U.S. is once again the “arsenal of democracy.” He needs to ensure the arsenal doesn’t run out.