Psychology has a label for Putin’s KGB-made mind 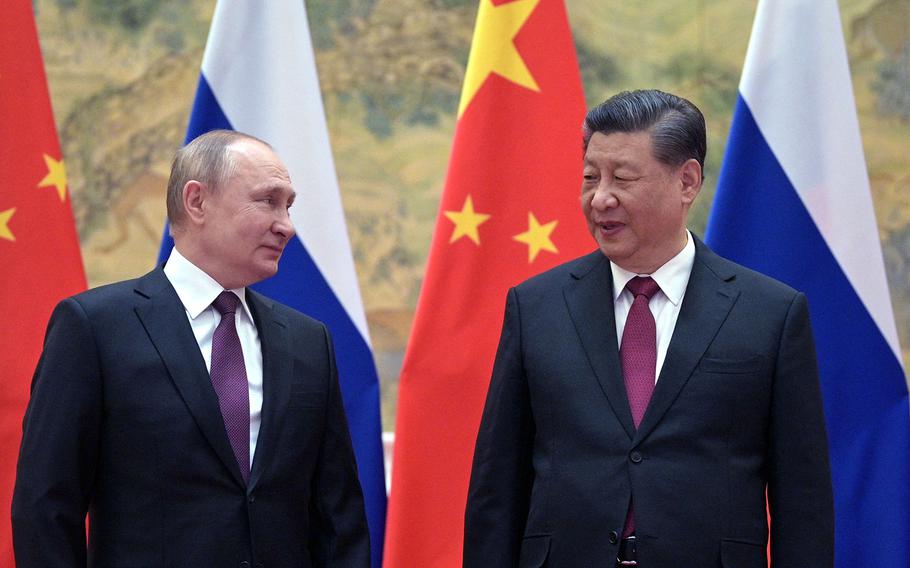 Russian President Vladimir Putin (left) and Chinese President Xi Jinping pose for a photograph during their meeting in Beijing, on Feb. 4, 2022. (Alexei Druzhinin/Sputnik/AFP via Getty Images/TNS)

One way to think yourself into the warped mind of a despot like Russian President Vladimir Putin is to first probe into the dark recesses of your own psyche, then figure out what’s different in his. The list is long, but one cognitive snafu that’s both common and relevant is called deformation professionelle.

We use the French term not only because that language often captures things better, but also because the phrase has an embedded pun that doesn’t translate into the English “professional deformation.” Formation professionelle means vocational training. Deformation professionelle therefore refers to the tunnel vision, biases and distortions we imbibe as we become expert at whatever we do.

Many prosecutors, for example, will walk down a random street and, looking left and right, see people who are guilty of something, just not yet caught. Defense attorneys strolling on the same sidewalk will look around and behold human beings who are unjustly accused of something or other, and probably harassed by an overbearing inquisition.

Usually, deformation professionelle is all around us, but no more than a nuisance. It applies to the professor who comes home at night and annoyingly stays in lecture mode with the spouse and kids. Or the tech guy at your company who - left to his own devices and in the name of cybersecurity - would make logging on to your computer so difficult that you’ll never do a jot of work again.

In the context of geopolitics generally, and the Russian attack on Ukraine specifically, the stakes are, of course, immeasurably higher. Putin suffered his deformation professionelle in the KGB, the spy agency of the former Soviet Union. He worked there from 1975, when he was in his twenties, until just before the U.S.S.R. collapsed. To this day, he likes to emphasize that there’s no such thing as a “former” KGB agent - people may have left the agency, but it never left them.

Long before becoming leader of a nuclear power, therefore, he built an identity and personality as a spook. Ponder this. He didn’t rise to power after running for office, shaking hands and kissing babies; nor after managing a business, curing patients, researching mRNA or selling widgets. Putin got into pole position to be the Kremlin’s alpha male by spying on human beings, as well as tracking, manipulating and often discarding them.

What did that do to Putin’s mind as we encounter it today? Ruediger von Fritsch, a former German ambassador to Russia, describes the psychological consequences as he observed them. Putin sorts everything in life - private or public, Russian or global - into categories of actual or potential hostilities, conspiracies or threats.

Ivan Krastev, a Bulgarian political scientist, concurs, saying, “He is constantly speaking of betrayal and deceit.” As Putin sees history and current events, Krastev says, “Things never happen spontaneously. If people demonstrate, he doesn’t ask: Why are they out on the streets? He asks: Who sent them?”

Viewed thus, many of Putin’s hallucinations become fathomable. The Soviet Union didn’t fall; it was pushed (by a hostile West). The “color revolutions” in former Soviet Republics weren’t primal yells for freedom by people who felt oppressed; those protesters were hired or manipulated by the CIA and other Western secret services. Ukrainians don’t want to join the European Union for its promise of prosperity, progress and liberty; they’re doing it because they’re run by Nazis whose real objective is to encircle and betray Russia and Putin.

Another aspect of this particular deformation professionelle concerns truth - or rather, the complete absence and irrelevance of the very notion. For years, people like Peter Pomerantsev, a Soviet-born British author, have pointed out that Putin flaunts his power by defining “reality” as arbitrarily as he pleases.

The once-and-always KGB agent knows that “if nothing is true, then anything is possible,” Pomerantsev reckons. “We are left with the sense that we don’t know what Putin will do next - that he’s unpredictable and thus dangerous. We’re rendered stunned, spun, and flummoxed by the Kremlin’s weaponization of absurdity and unreality.”

While he was German ambassador to the Kremlin, von Fritsch experienced firsthand the cognitive whiplash this produces in others. “In some conversations in Moscow after the annexation of Crimea in 2014, I had the feeling that we invaded the peninsula rather than Russia.” If there is no truth, it no longer matters whether you distort reality or invert it, as long as you can. In Putin’s system, lying isn’t a bug, it’s a feature.

So what makes Putin different from the rest of us? A lot. First, while we may all suffer from some deformation professionelle (journalists are hardly immune), most of us aren’t spies.

Second, biased as our worldviews may be, most of us still have to occasionally encounter and interact with other people, who have different perspectives. Putin, by contrast, appears to be completely isolated in his alternate reality.

And third, even when we go off the deep end, most of us don’t have enough power to hurt millions of innocent bystanders (although the grieving people of Uvalde, Texas, know that a person acting alone can still destroy the lives of many). Putin does have that ultimate power, which comes with the codes to launch nukes.

His formative years in the KGB caused a deformation professionelle in Vladimir Putin that has left him cynical, paranoid, vengeful, unscrupulous and ruthless. And above all, mendacious. Ukraine, the West and the world must keep that in mind in calibrating a strategy against him.

Andreas Kluth is a Bloomberg Opinion columnist covering European politics. A former editor in chief of Handelsblatt Global and a writer for the Economist, he is author of “Hannibal and Me.”