Imagine seeing a commercial featuring Ryder and Marshall from “Paw Patrol” lighting up cigarettes and enjoying a smoke together.

It’s hard to fathom that happening, but in 1961, beloved cartoon characters Fred Flintstone and Barney Rubble happily smoked cigarettes in an ad for Winston. Most children of that era could easily recite the ad slogan: “Winston tastes good like a cigarette should.”

Now, imagine a teenager walking to school today and seeing a billboard with a 10-foot cannabis leaf image on it and the cheeky tagline “I like big BUDS and I cannot lie.” You don’t need to imagine it, of course, because these ads are common now that recreational marijuana use is legal in many states. Some social media posts from dispensaries even feature familiar cartoon characters and offer branded merchandise like caps and T-shirts.

These legal cannabis companies and dispensaries have certainly done their homework. Some are using tactics from the playbook of alcohol and tobacco companies to target young users — and hook them for life.

The product is different; the tactics are not.

We should be more outraged by this. We know the serious risks of smoking. It is against the law for tobacco companies to advertise on TV and on billboards or to sponsor sporting and entertainment events. Somehow, cannabis companies are allowed to do those things in most of the states where it is legal.

Eighteen states and Washington, D.C., have legalized cannabis for recreational use for those ages 21 and older. More states are likely to join, so new challenges are rising in the prevention of cannabis use among teens. We cannot disregard the important lessons of the past. Those of us who are trusted with protecting children and advocating for their health and safety are confused and frustrated by the growing appeal these products have for children and teens.

Cannabis companies can strategically appeal to youth to ensure decades of committed users. Some people may shrug at this. Perhaps they don’t see the links to the past or they don’t realize the potential harm.

Proponents may point to the defense that cannabis is a different, less harmful substance than cigarettes.

Let’s look at this argument. Smoking any substance releases large amounts of tar, toxins and carcinogens, which all damage sensitive lung tissue. This damage increases the risk of cancer and chronic obstructive pulmonary disease. Particularly for youth, there is mounting research that shows cannabis can interfere with memory, attention, and problem-solving abilities in the developing adolescent brain. These learning impairments are associated with negative social outcomes, such as decreased high school completion.

There is strong evidence also correlating early cannabis use to increased rates of negative mental health issues as well as the risk for other illicit drug use disorders. Those with underlying mood disorders have an increased risk of suicidality and psychosis. Also, while cannabis may not have the same type of physical addiction pattern tobacco has, addiction does occur and the risk is well-established.

We may be able to contribute these effects occurring more frequently to the exponential rise of THC levels in cannabis. THC is the main psychoactive compound in cannabis that makes people high. Cannabis used in the 1960s and ’70s had THC levels of 3-5%, producing a mild euphoria. Now, with genetically modified cannabis plants being cultivated to produce 30% THC levels and extraction processes to deliver resins that are essentially 100% pure THC, these detrimental health implications are not a surprise.

Another specious argument that has been used against the efforts to limit cannabis advertising is that marketing doesn’t affect youth use. Ongoing research is showing something different, including a 2017 CDC sponsored study that polled high school students on their substance use behaviors. It found 52% reported exposure to cannabis advertising from the internet, 32% from television, and 16% from billboards. Adolescents who reported exposure from one mode of advertising had a 60% increased likelihood of being current cannabis users.

We should urge our state legislators to protect children. Some states have already put in place restrictions on youth-targeted cannabis ads. Parents and teachers, tell your legislators they should prioritize children and students. Health care providers, make cannabis reform a priority in your advocacy efforts.

The cannabis industry likely sees children as potential lifelong customers. We should see them as innately innocent and needing our protection.

Dr. Gary Kirkilas is a pediatrician in Phoenix and a member of the American Academy of Pediatrics. 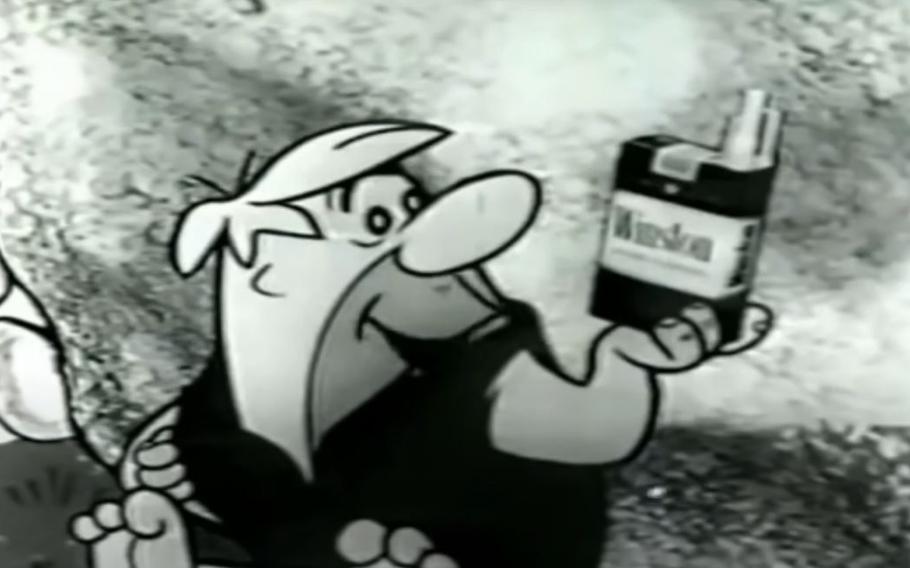 In 1961, beloved cartoon character Barney Rubble (along with Fred Flintstone) from “The Flintstones” happily smoked cigarettes in an ad for Winston. (Screen grab from YouTube.)