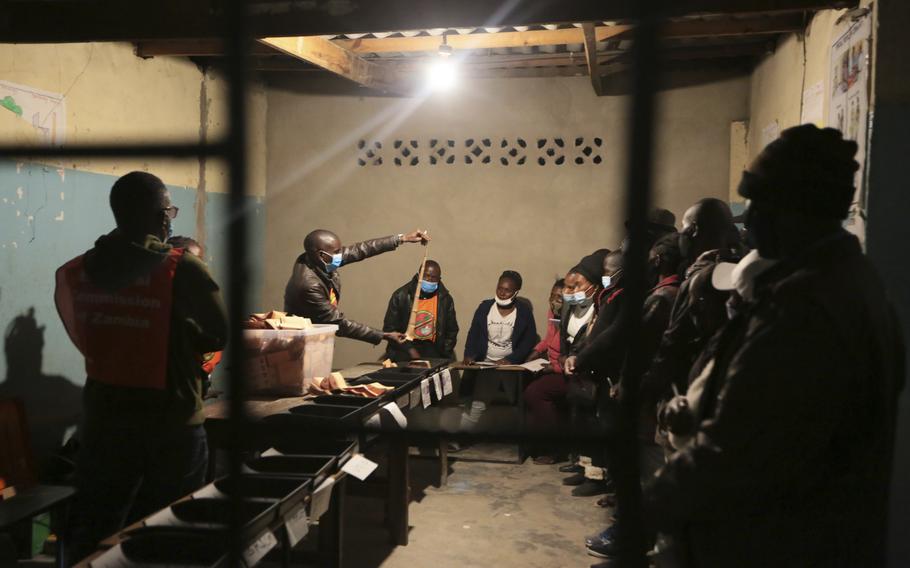 Political party agents keep a close eye as an electoral officer displays a ballot paper at the start of the counting process at a polling station in Lusaka, Zambia, Thursday Aug, 12, 2021. (Tsvangirayi Mukwazhi/AP)

Democracy does not disappear by accident. Instead, all over the world, we are witnessing deliberate attempts by antidemocratic actors to weaken civil society, cripple the rule of law and activate social fragmentation. From weaponizing fear to rewriting history to exploiting religion, today’s autocrats and their supporters leverage the same playbook. At the heart of that playbook is a multipronged attack on civil society. In 2021, among the 33 autocratizing countries, repression of civil society worsened in 22.

If a diminished civil society is the foundation of autocracy, a robust and inclusive civil society is the bedrock of democracy. Civil society serves as an intermediary between the state and the individual, composed of organizations such as schools and universities, nonprofit and advocacy groups, professional associations, churches and cultural institutions. Civil society is the connective tissue that holds any society together. It is no accident that anti-democratic actors start there.

Despite the centrality of civil society to the authoritarian playbook, efforts to strengthen democracy too often underinvest in civil society — even though it is our best line of defense.

Civil society organizations in both democracies and autocratic regimes are hamstrung by limited resources and lack of coordination. Even in the United States, with the world’s most sophisticated philanthropic culture, civil society organizations defending and strengthening democracy are grossly underfunded compared to organizations working on education, health or poverty alleviation. For instance in 2020, U.S. philanthropists spent $71 billion on education whereas decadelong philanthropic funding of democracy organizations totaled about $14 billion. This pattern of overinvesting in issue areas and underinvesting in governance is also reflected in how the U.S. government has allocated its funding globally. For example, in Africa, the U.S. government spends 70% of its funds ($5.4 billion) on health initiatives and only 4% ($312.4 million) on democracy, human rights and governance.

Because civil society is inherently decentralized, sometimes it can be hard to know how to strategically invest in it. Investments in civil society may not seem as significant as sweeping institutional and policy reforms, such as H.R. 1 in the United States. Or, because civil life involves the messy work of bringing people together, efforts to strengthen it may seem unpredictable relative to individually targeted psychological interventions, such as traditional or social media ads to incentivize action.

It doesn’t have to be so. We can and must develop a strategic approach to shoring up and inoculating civil society against attempts to weaken it. The first part of the solution to protect and strengthen democracy is to prioritize funding democracy issues and organizations. The second is to invest these resources strategically in civil society. We propose two immediate priorities:

Build civic resilience: In the U.S. and internationally, there is an overinvestment in short-term outcomes, in pursuit of a silver bullet electoral or policy win (the 2020 U.S. elections cost a whopping $14 billion). While leadership and structural reforms are important to strengthening democracy, we also need civil society organizations that cultivate a shared commitment to democratic values and build resilience among individuals and communities to advance those values. Funding for civil society organizations that are tirelessly building the culture of democracy and social cohesion through approaches such as civics education, community organizing, leadership development and facilitating deliberative dialogue for inclusive democracy should be prioritized alongside those working on structural reforms.

Facilitate transnational pro-democracy coordination: As the Freedom House warns, “the global order is nearing a tipping point, and if democracy’s defenders do not work together to help guarantee freedom for all people, the authoritarian model will prevail.” Today, pro-democracy organizations are siloed, lacking the level of transnational coordination and playbook sharing that their autocratic counterparts artfully orchestrate. We need to create forums such as the upcoming virtual Global Democracy Champions Summit to weave global networks and elevate the aspirations, leadership and innovations of pro-democracy organizations, activists, academics and philanthropists.

From journalists to think tanks to Ukrainian freedom fighters, there is outcry for resources and innovation to defend liberal democracy. In the same way philanthropic institutions, governments and multilateral institutions galvanized in response to COVID-19, this is the moment to rise in global solidarity for democracy. Philanthropy, in particular, has a historic role to play by making bold investments in civil society organizations addressing both short-term crises as well as long-term civic infrastructure building efforts.

Yordanos Eyoel is the founder of Keseb and a visiting fellow at the SNF Agora Institute at Johns Hopkins University. Hahrie Han is the inaugural director of the institute and a professor of political science at Johns Hopkins.