US is expanding its goals in Ukraine. That’s dangerous. 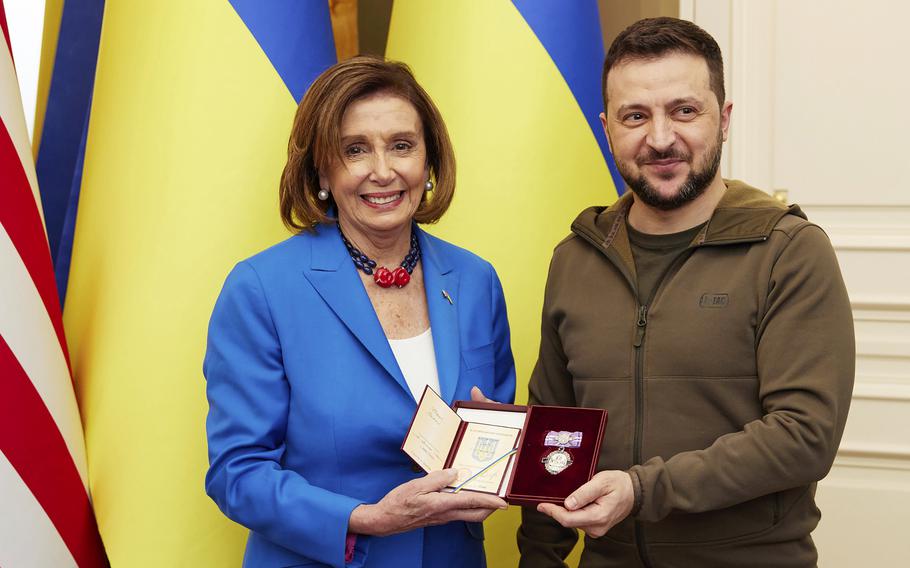 Ukraine has surprised the world with its ability to hold back Russian aggression. Yet its success in doing so appears to be prompting Western leaders to expand their goals for the war in ways that may carry extraordinary, underappreciated risk. The earlier hope was that a robust Ukrainian defense would ensure the country’s right to exist as a sovereign and independent state while minimizing the loss of territory in the south and east. But now, many political and military leaders are laying out much loftier goals, backed by an unprecedented infusion of military aid.

“Ukraine’s victory is a strategic imperative for all of us,” British Foreign Secretary Liz Truss recently proclaimed. “. . . We are doubling down. We will keep going further and faster to push Russia out of the whole of Ukraine.” Rep. Jason Crow, D-Colo., who traveled with House Speaker Nancy Pelosi, D-Calif., to Kyiv, made a similar point: “The United States is not interested in stalemates. We are not interested in going back to the status quo. The United States is in this to win it.”

Talk of total victory aligns well with another recently floated objective: an extended bloodletting of the Russian army. Defense Secretary Lloyd Austin asserted on April 25 that the United States wants “to see Russia weakened to the degree that it can’t do the kinds of things that it has done in invading Ukraine.” And that fits with Joint Chiefs of Staff Chairman Mark Milley’s prediction that the war will turn into a “protracted conflict . . . measured in years.”

Yet crippling Russia’s military or expelling Russia from Ukraine are significantly more dangerous aims than preventing the further loss of Ukrainian territory or, through limited offensive operations, gaining some of it back. Unfortunately, if Russian President Vladimir Putin begins to think that his back is against the wall, he may lash out by directly confronting NATO, intensifying the conventional war in the east, or even using nuclear weapons.

Moreover, building a Ukrainian army capable of the large-scale counteroffensives needed to expel Russia or profoundly degrade its military would almost certainly extend and intensify the war, leading to additional suffering. The sooner that President Volodymyr Zelensky and the Russians can get to the peace table to arrange a deal that preserves Ukrainian sovereignty, the better.

Keep in mind that while Russia’s campaign has been horrific, it can still get much, much worse. Russia has been fighting with one hand tied behind its back, largely for domestic political reasons. In Putin’s Russia, after all, the conflict has not been described as a war but rather as a “special military operation.” But the worse the battle goes for Putin, the more he will be tempted to mobilize his society to fight it as a full-blown war, despite the political risks of calling up reservists or expanding conscription. Russia has more than three times the population of Ukraine, giving it a hard-to-surmount advantage in any war of attrition, despite Ukraine’s skilled and motivated soldiers. Ukraine should try assiduously to avoid any further mobilization on Russia’s part, yet the West’s expanding war aims make it more likely.

Even worse, Putin could turn to unconventional weapons, including low-yield nuclear weapons, to stave off defeat. Skeptics might argue that Putin is not suicidal and would never risk nuclear escalation with the West. But Russia is overwhelmingly likely to begin any nuclear escalation - or, for that matter, chemical escalation - inside Ukraine, which would put the onus on the West as to how to respond. With a handful of nuclear weapons Putin could obliterate significant portions of the Ukrainian army, especially if conventional battles forced it to mass in a relatively small area in the east. (To presume that the architect of Bucha would blanch at using nuclear weapons against Ukraine, which cannot respond in kind, is wishful thinking.) All the new heavy weapons flowing to the Ukrainian military would not save it from destruction in this situation, to say nothing of the casualties among Ukrainian civilians.

Going nuclear would be extremely dangerous for Putin. But if he believes that the West is trying to permanently weaken Russia, will never lift sanctions or even aims to topple his regime (despite repeated denials from Western policymakers), he may become willing to roll the dice. Putin could see escalation as a way to preserve the military as the basis of both his international clout and domestic security.

More prosaically, the longer the war continues, the higher the probability that NATO and Russia will be drawn into direct conflict - through accident or incident. Russia has every incentive to attack the coming avalanche of Western military aid to Ukraine. Such attacks could easily lead to a head-on collision between superpowers: Planes and munitions might go astray across international borders, for instance, or Moscow could decide to deliberately target the NATO bases where Ukraine receives military aid and training. Such a confrontation would carry obvious nuclear risks.

But assume there is no nuclear escalation. A nearly inevitable result of expanded Western war aims will still be a longer, more intense conflict that grinds up cities and towns and keeps killing civilians. For an example of the kind of damage that a proxy war without end can cause, we need only look at Syria.

And the reality is that neither total victory for Ukraine nor dismemberment of the Russian army is necessary for Western security. The Russian military is already beset by terrible logistics, a lack of tactical acumen, cratering morale and unreliable weapons. The senior officer corps and battalion tactical groups have suffered brutal attrition, and the coming battles in Ukraine’s east will only exacerbate these problems. Russia’s ground forces are not in a position to go on the offensive against NATO anytime soon.

Russia remains a threat to the West, but as the Pentagon explicitly told Congress a month after the war began, it plays second fiddle to the competition with China. We should not let Putin’s mistake of invading Ukraine prod us toward making our own error: spending valuable resources and attention on an escalating proxy war against an adversary that has already inflicted large wounds on itself.

Fortunately, there is an alternative, one that is consistent with continued substantial military support to Ukraine. The West should frame its infusion of aid as a means to help Kyiv achieve an acceptable settlement. These military resources can help Ukraine regain portions of its lost territory in the south and east and better preserve its economic and institutional relationships with Europe in whatever deal Kyiv eventually makes to end the war. Policymakers will have to be flexible as they assess prospective settlements, but President Joe Biden himself recently broached the key idea, arguing that “Congress should quickly provide the requested funding to strengthen Ukraine on the battlefield and at the negotiating table.”

Effectively shaping a negotiated outcome to the war will also require the West to put diplomatic pressure on Kyiv to come to that deal sooner rather than later. This includes demonstrating a willingness to turn off the spigot of military aid if needed. The present tranche should be given time to work its effect, but its ultimate purpose should be to hasten the conclusion of a war that carries awful risks and tragic humanitarian consequences for all involved.

Brendan Rittenhouse Green is an assistant professor of political science at the University of Cincinnati and an adjunct scholar at the Cato Institute.

Caitlin Talmadge is an associate professor of security studies in the Edmund A. Walsh School of Foreign Service at Georgetown University