Conservatives won’t be able to repeal more than Roe 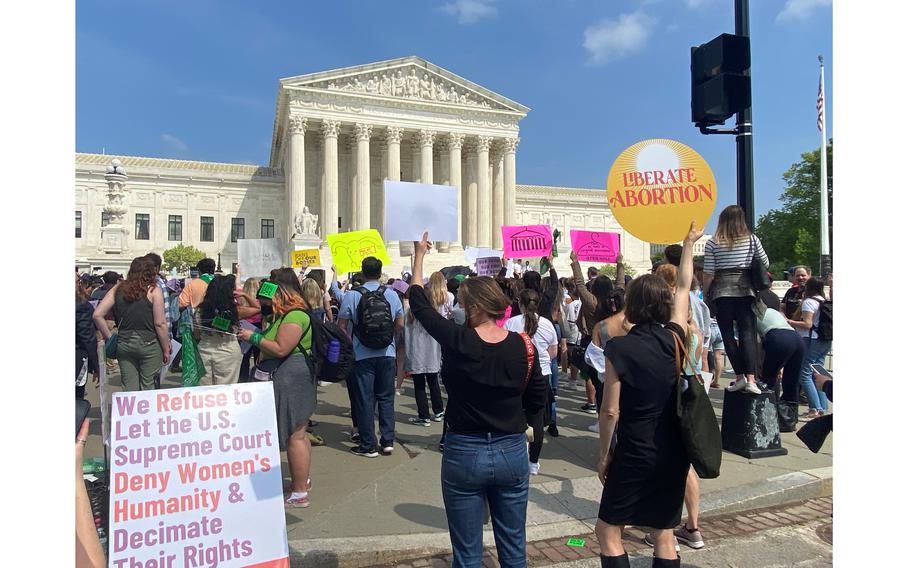 Protesters gather outside the Supreme Court on Tuesday, May 3, 2022, after a court draft opinion that would throw out the Roe v. Wade abortion rights ruling was leaked in a Politico article late Monday, May 2, 2022. (Robert H. Reid/Stars and Stripes)

Since someone leaked a draft of the Supreme Court’s opinion in this year’s big abortion case, two questions have emerged about the scope of conservative policy goals. Will Republicans try to ban abortion by federal statute if Roe v. Wade is overruled, or leave the issue to the states? And will the Republican appointees on the Supreme Court overturn other precedents with a family resemblance to the 1973 abortion-rights ruling?

In both cases, there are reasons to expect circumstances to block conservative ambitions.

Many Republicans in Congress are saying that abortion after Roe will be a state matter, but they do not really believe it. Republicans overwhelmingly voted to ban partial-birth abortion at the federal level during the George W. Bush administration. More recently, they have sought a federal ban on abortion after 20 weeks of pregnancy. They succeeded in the first project and have failed in the second. Now that Roe appears to be on its way out, some Republicans are talking about a nationwide ban on abortion after six weeks.

But they do not appear to have the votes for the six-week ban, given that they haven’t had them for the 20-week ban, or even for federal protections for babies who survive abortions. They will not have a veto-proof majority for any such federal law so long as a Democrat is in the White House.

Even if a Republican wins in 2024, a federal ban would require either 60 votes in the Senate or the effective end of the filibuster. Almost all Democrats would presumably oppose the bans. There would also be a few Republicans who either favor legal abortion or think the federal government has no constitutional power to prohibit it. (I think it does have that power and that the question of whether to seek its exercise is one of prudence.) The main legislative action, then, will probably remain in the states, at least for several years.

The question about the Supreme Court’s trajectory arises because some of Roe’s premises also serve as foundations for other major decisions. The court has held for more than 50 years that the 14th Amendment, by prohibiting any state from denying any person liberty without due process of law, protects privacy. It invoked that privacy right to strike down laws against contraception in Griswold v. Connecticut (1965) and against sodomy in Lawrence v. Texas (2003). It relied on Lawrence, in turn, to rule in Obergefell v. Hodges (2015) that governments must recognize same-sex marriages.

In his draft opinion for the court in the abortion case, Justice Samuel Alito wrote that the 14th Amendment protects only those rights that are enumerated in the Constitution or deeply rooted in the nation’s history. Since contraception was restricted, sodomy illegal and same-sex marriage inconceivable for much of that history, both supporters and opponents of those other landmark court decisions have wondered whether they can still stand. Alito dissented in Obergefell — he thought states should be allowed to decide whether to recognize same-sex marriages — and his judicial philosophy suggests he would not have voted with the majorities in Griswold or Lawrence if he had been on the court.

But Alito distinguishes these other issues from abortion on the ground that the latter involves “the critical moral question” of the destruction of human beings or, at least, “potential life.” He says repeatedly that the court can rule that governments may act on this interest without undermining the other rulings.

The decadeslong campaign of resistance to Roe also sets it apart from those rulings. Griswold and Lawrence didn’t lead to any such campaign. Without state legislation to outlaw contraception or sodomy, even a justice who wanted to overturn those rulings would not have any occasion to do it. (This is something Justice Amy Coney Barrett tried to explain during her confirmation hearings.)

Opponents of Roe also had the option to fight it in increments. They could ban some types of late-term abortions, require parental notification or restrict the activities of women’s health clinics, for example, and ask the courts to allow those laws. Eventually, they built up to bans on abortion after 15 weeks of gestational age, the restriction specified by the 2018 Mississippi law that has put the issue before the Supreme Court now. These laws are popular in most polls, gaining support even from some people who consider themselves pro-choice, but directly conflict with Roe. As both parties arguing the Mississippi case agreed, the justices had to choose between keeping the law and keeping Roe.

Same-sex marriage is, by contrast, a binary choice; there’s no equivalent strategy for chipping away at the right in legislatures and courts. A state would have to take it on directly, and there’s no fuzziness about the borders of the holding that would enable state laws to make their way up the courts to the justices.

Roe may be on its way out. But social conservatives are still under political and institutional constraints that would keep them from undoing social liberalism across the board even if they wanted to. The sexual revolution is not going to be repealed.