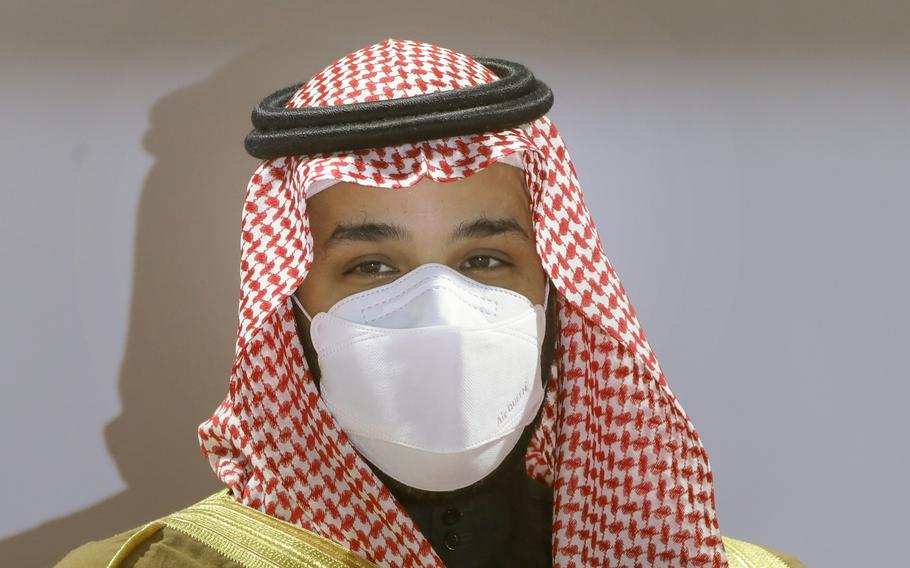 FILE - In this Feb. 20, 2021, file photo, Saudi Crown Prince Mohammed bin Salman wears a face mask to help curb the spread of the coronavirus as he attends the Saudi Cup award ceremony during the final race of the $20 million, the Saudi Cup, at King Abdul Aziz race track in Riyadh, Saudi Arabia. Top Biden administration officials on Tuesday, July 6, hosted a brother to Saudi Arabia’s powerful crown prince, Mohammed bin Salman, in the highest-level such visit known since the U.S. made public intelligence findings linking the crown prince to the killing of journalist Jamal Khashoggi. (Amr Nabil/AP)

The most important partnership in the Middle East has been put in jeopardy by the peevishness of a prince and political opportunism of a president. Repairing the Saudi-American relationship will require the first to behave like a grown-up, the other like a statesman.

That’s asking a lot of two men who have little in common beyond a reputation for stubbornness. One operates in a conscience-free bubble that comes with absolute power, while the other wields a selective moralism characteristic of a performative political culture. But the war in Ukraine just might help them both get over themselves.

It may already have had that effect on President Joe Biden. The steep rise in energy prices as a result of the Russian invasion seems to have shown him the error of his Saudi policy: Having promised to make Mohammed bin Salman a “pariah,” Biden is now hoping the kingdom’s de facto ruler will pump more crude to help ease the spike in gasoline prices ahead of U.S. midterm elections.

MBS, as he is commonly known, isn’t taking Biden’s calls. The loss of Russian energy supplies as a result of the war has left the prince in the catbird seat, allowing him to disregard entreaties from Washington. As the world’s biggest oil exporter, the kingdom is collecting a windfall - more than enough to paper over the yawning gap between promise and performance of efforts to grow Saudi non-oil revenues, the central pillar of MBS’s “Vision 2030” economic program.

But the prince shouldn’t get too comfortable on that perch. For one thing, Saudi Arabia depends on the U.S. security umbrella for the protection of its petroleum infrastructure and exports, which have come under repeated attack from Iran and its proxies. For another, sustained high prices could accelerate global efforts to reduce consumption of fossil fuels - see how some nations are already rethinking their nuclear energy strategies - which would undermine the kingdom’s interests in the longer term.

At the moment, the burden of mending the relationship rests mainly on Biden. Having previously found it expedient to shun the prince, the president now needs to find a way back to the old status quo, in which Washington and Riyadh put strategic and security interests above all other concerns. A return to that arrangement will create a moral dilemma for the U.S., given the Saudi record on human rights and the kingdom’s treatment of political dissidents. But Biden routinely copes with such complexities in his dealings with other ethically challenged leaders.

Biden’s departure from that norm is best understood as a product of Washington politics. In making the “pariah” comment during a debate between Democratic presidential challengers, he was serving red meat to his party, which was outraged by the open Saudi preference for Donald Trump, and suspicious of the deepening friendship between the prince and Jared Kushner, the first son-in-law. Moreover, in singling MBS out for vilification, Biden could be certain of a receptive audience in the U.S. capital, where the Saudi scion already faced hostility over the heinous 2018 murder of Jamal Khashoggi, a Washington Post columnist admired on both sides of the aisle.

MBS, in other words, was a safe target for Biden’s scorn.

One of Biden’s first acts as president was to end U.S. military support for the Arab coalition that MBS had assembled to support the Yemeni government in a bloody civil war against Iran-backed rebels, known as the Houthis. For good measure, Biden overturned Trump’s decision to designate the Houthis as a foreign terrorist organization, even as the rebels were lobbing missiles and rockets against Saudi civilian targets.

And just to rub it in, Biden refused to speak directly with the prince, a courtesy extended to MBS by other world leaders in recognition of the fact that he is the kingdom’s de facto ruler, with the blessings of the invalid King Salman.

That this was a political posture rather than a principled position by the president was obvious from his treatment of other regional strongmen. He was willing to speak with Egypt’s General Abdel-Fattah El Sisi, Trump’s “favorite dictator,” who seized power in a coup when Biden was vice president and whose regime has killed hundreds - none of them mourned by the Washington elite - and jailed tens of thousands of political opponents. Biden also got over his stated disgust with Turkish President Recep Tayyip Erdogan, a man he had described as an “autocrat” whose political demise should be an American objective. And even as he put MBS in the sin bin, Biden repeatedly signaled his desire to unshackle Iran, a regime that is by several magnitudes more disruptive to peace in the Middle East as well as representing a greater danger to American interests. His eagerness to revive the 2015 nuclear deal signed by Tehran and the world powers has sparked anxiety among traditional U.S. allies in the region, and especially among the Saudis and Israelis.

If Biden’s cold shoulder of MBS smelled of political expedience, then the prince’s response has smacked of petulance. You can almost picture him pouting when, in a recent interview with the Atlantic, he responded to a question about the president’s opinion of him by declaring, “Simply, I do not care.”

There is also a tantrum quality to his behavior with top U.S. officials: The Wall Street Journal reported that he shouted at Jake Sullivan, Biden’s national security adviser, for bringing up Khashoggi at a meeting last September.

The White House denied that there was any shouting, but not that relations with Riyadh were badly strained. That hopeless task fell this week to the Saudi embassy in Washington, which issued a statement to the effect that all was copacetic between the two countries. It won’t have fooled anybody in either capital.

While snubbing Biden, MBS is cultivating closer relations with Chinese leader Xi Jinping, whom he has invited to visit Riyadh next month. He’s also quite happy to take calls from Russia’s Vladimir Putin. And, as if to poke the U.S. president in the eye, he has continued to nurture his friendship with Kushner, whose new private equity firm recently got a $2 billion commitment from a fund run by MBS.

But whatever schadenfreude the prince may derive from Biden’s current predicament, there are some hard realities he can’t ignore. At the helm of the world’s largest importer of petroleum, Xi, as much as Biden, wants oil prices lowered. Unlike the U.S., China offers the Saudis no security cover. There has been some talk of Russo-Saudi military cooperation, but the dismal performance of Putin’s war machine against Ukraine should give MBS pause.

There is, at the end of all calculations, no real alternative to the Saudi-American relationship. Once the president and the prince recognize this, the next steps are clear enough. For a start, Biden needs to retract his “pariah” designation for MBS and reinstate the terrorist designation for the Houthis, as well as provide the Saudis more protection from rocket and missile attacks. In turn, the Saudis need to pump more crude into the world market to cool prices - and MBS needs to take Biden’s calls.

The most important relationship in the Middle East depends on these two men seeing sense.