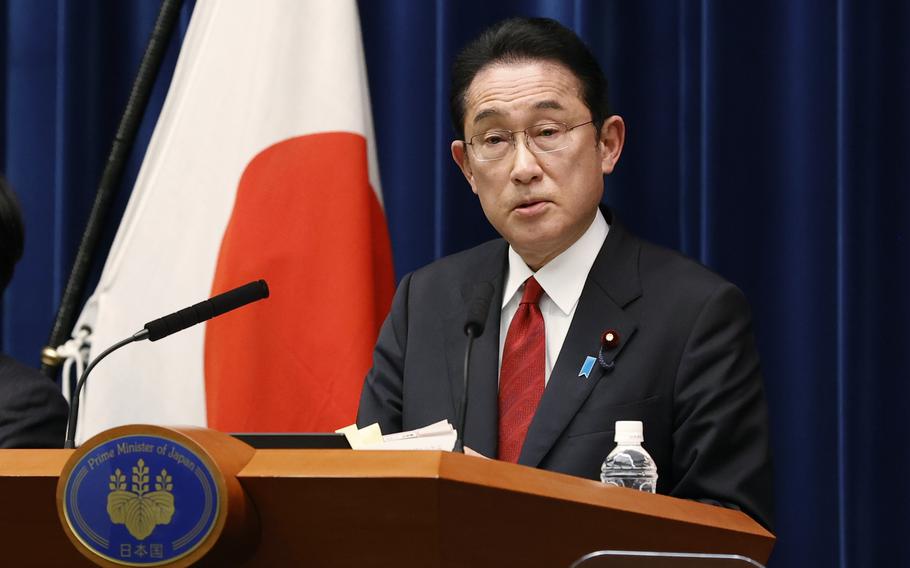 Japan's Prime Minister Fumio Kishida speaks during a news conference at the prime minister's official residence on April 8, 2022. Kishida and visiting U.S. lawmakers reaffirmed their commitment to working together under a longstanding bilateral alliance on Saturday, April 16, amid heightened global tensions spanning the war in Ukraine to threats from neighboring China and North Korea. (Rodrigo Reyes Marin/AP)

Just days before the national holiday this Friday commemorating the birth of the late Emperor Hirohito, Japan got a rude reminder of its inextricable part in the global history of war. It came in the form of an apology from the government of Ukraine.

Social media out of Kyiv had released a video about fighting fascism that represented the Axis powers with images of Adolf Hitler, Benito Mussolini and Hirohito - who sat on the Chrysanthemum throne during World War II and oversaw Japan’s return to prosperity and active “non-aggression” in the decades after its defeat. Hirohito has been portrayed by some as a helpless puppet of the militarists who ran the empire’s expansionist policies in the first half of the 20th century. Japan’s government says it’s not appropriate to rank him alongside Hitler and Mussolini.

The video was re-edited and the government issued a tweet saying, “We had no intention to offend the friendly people of Japan.” Tokyo has been a staunch ally of Ukraine since Russia invaded the country in February.

The social-media episode, however, comes amid a potential shift in Japan’s attitude toward defense in general. And it’s about time. The nation has enjoyed such a stretch of peace that some talk about a particularly Japanese affliction known as heiwa boke - a phrase which might be translated as “peace complacency” or perhaps, in the words of harsher critics, “peace senility.”

Safe under the U.S. nuclear security umbrella since 1945, Japan avoided sullying its hands with armed conflict and drifted into a kind of defense dotage - believing in pacifism as a virtue in and of itself, and, therefore, not bearing responsibility for a world full of danger and conflict.

That has begun to change. Russia’s war on Ukraine has stirred up emotions and the nation might just be rousing from its long slumber. Hawkish former Prime Minister Shinzo Abe is among those leading calls for the country to boost spending on defense. “If Japan, which says it needs the cooperation of other countries for regional peace and stability, doesn’t raise its spending it will be a laughing stock,” Abe told a symposium in Tokyo last week. A research panel of the ruling Liberal Democratic Party is proposing that Prime Minister Fumio Kishida at least double defense spending to 2% of GDP.

Abe tried and failed to get the military budget beyond the long-held voluntary cap of about 1%. This time, however, public opinion has come out in greater support. Since February, polls have repeatedly backed higher spending on defense. A Nikkei survey this week showed 55% in support of the LDP’s 2% proposal. That’s a stunning turnaround from the early 2000s, when government polls showed barely double-digit backing for any increase in defense spending. Just seven years ago, thousands demonstrated against Abe’s tweaks to security legislation allowing Japan to send troops to fight overseas.

The war in Ukraine has clearly touched a nerve. Not only does Japan have its own territorial dispute with Russia, the invasion has brought home the very real risk of an unprovoked attack, in a way that never happened with North Korean missile and nuclear tests, or the repeated naval harassment of shipping boats by China’s Coast Guard around the disputed islands.

Japan’s hawks have long been aware of an increasingly aggressive China. Right-leaning commentators talk of Japan becoming “a second Ukraine” unless action is taken. While this may be an overstatement, Japan has legitimate fears of widespread instability and economic chaos that would be the consequence if China invaded Taiwan. Meanwhile, the chaotic Trump presidency and the aloofness of the Obama administration have raised doubts about the vaunted U.S. commitment to Japan’s defense.

Younger voters seem to be tilting conservative on security. Greater defense spending was backed by 65% of those age 18-39, according to the Nikkei. The patriotic reputation of the country’s so-called Self-Defense Forces - in effect, Japan’s military - has improved because of its heroic disaster-relief operations and, most recently, key role in administering Covid vaccines.

The question is: Will Japan wake up fast enough? While attitudes might be changing, the political sphere moves slowly and cautiously. Any debate will be protracted. Already, the LDP proposal is being castigated by proponents of the post-war status quo. It “aims to make Japan a de-facto military superpower under the guise of strengthening deterrence,” thundered the left-leaning Tokyo Shimbun in an editorial, urging the government “not to undermine the principles of the ‘Peace Constitution’.” Natsuo Yamaguchi, the leader of the LDP’s long-standing coalition partner Komeito, has already poured cold water on the idea of breaking the 1% of GDP spending line on defense.

Rethinking taboos is no easy feat. A recent white paper on defense was the center of controversy after it put a picture of a samurai warrior on its cover (a previous cover was pink and was illustrated by Mount Fuji and a cherry blossom). But it’s well past time for Japan to seriously review such hangups. The world is a dangerous place and Japan must realize it has responsibilities.

Abe and other hawks are now encouraging a discussion on nuclear sharing: the possibility of deploying U.S. nuclear weapons on Japanese soil, something that would go against the decades-long abhorrence of such apocalyptic armaments.

Prime Minister Kishida, a lawmaker representing Hiroshima, swiftly rejected such a move. Still, he is key to any further change in policy precisely because he hails from one of the two cities devastated by atomic bombs. A good start would be for him to make good on the LDP’s long-held election pledge to revise the constitution to clarify the role of the Self-Defense Forces.

Kishida can also back practical ones: Increased spending to boost the SDF’s declining manpower, and moving forward on cybersecurity, space operations and missile defense. He can do this without betraying the legacy of Hiroshima and Nagasaki.