A redistricting gamble Democrats will regret 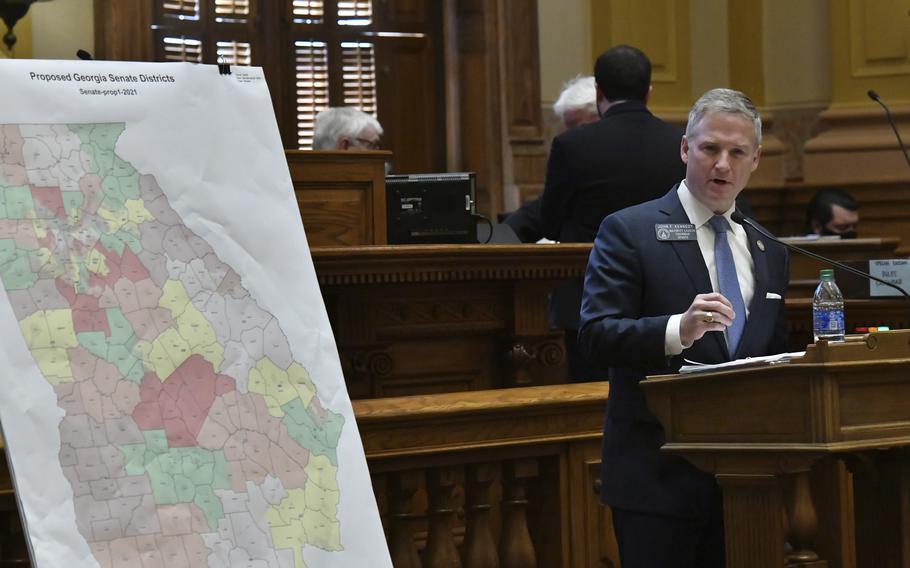 Sen. John Kennedy introduces SB 1 EX in the Senate Chambers during a special session at the Georgia State Capitol in Atlanta on Tuesday, Nov. 9, 2021. The hearing was a step toward votes on new political maps for the state House, state Senate and Congress. (Hyosub Shin/Atlanta Journal-Constitution via AP)

Amid all the ominous political news of this season, Democrats have kept their eyes fixed on a ray of hope: States were redrawing the lines that define congressional districts, and Democrats were making out well in the process. “How Democrats are winning congressional redistricting fights” was a CNN.com headline last month. “Republicans built on their existing gerrymanders to try to expand their House advantage, but Democrats fired back even more powerfully with gerrymanders of their own,” reports Vox.

But gerrymandering isn’t going to save the Democrats. Not this year, and probably not this decade. It may not even do much to help them. In part, that’s because the new lines aren’t final. In Florida, Republican Gov. Ron DeSantis has persuaded the state Senate to revise the borders in a special legislative session. If his new map prevails, the state will have four more Republican-leaning House seats than it does now.

But there are also trade-offs in redistricting that pose an especially acute problem for contemporary Democrats. Their voters have gotten more geographically concentrated over time; they’ve shed rural voters while gaining city-dwellers. To maximize the number of House seats they can contest, they have to divide the voters in their urban strongholds among districts. Because the 2020 election left them with full control over redistricting in relatively few places, they have to use this tactic very aggressively where they can.

Nevada is a case in point. Three of the state’s four House districts tilt Republican. The Democrats, who control the governorship and both houses of the legislature, took Democratic voters out of the district centered in Las Vegas and split them among two other seats. The result was a new map with three districts that voted for Joe Biden in 2020.

The danger for Democrats lies in the fact that all three of the redrawn districts voted for Biden narrowly. Rep. Dina Titus, the Democrat who holds the Las Vegas seat, would have been a lock for re-election under the old lines. Now a Republican wave, even a medium-sized one, could sweep the Democrats out of every seat in the state. That’s a real prospect in a state with a lot of working-class Hispanic voters, a group that has been moving toward the Republicans lately. Keep in mind, too, that this wave would be measured against the parties’ showing in the 2020 presidential race. On average, Biden ran ahead of Democratic congressional candidates that year, winning over some voters who often back Republicans but couldn’t abide Donald Trump. Democrats can’t count on those voters in 2022.

Republicans generally followed a different strategy in redistricting. With more district lines under their control, Republicans could afford to make it a higher priority to protect the seats where they already had an advantage. They weren’t as aggressive about maximizing the number of seats they could contest. That’s why news coverage played up Democrats’ surprising gains from redistricting.

But Republicans got both a short-term and a long-term benefit from their approach. This year, they can concentrate their efforts on a smaller number of winnable seats. And in future elections of this decade, when there might be a Democratic wave, more of the Republicans’ seats will be safe.

On April 20, the election-watchers at the Cook Political Report revised their ratings of eight House races. Each revision favored the Republicans. The two Nevada seats that got additional Democratic voters through redistricting had been judged to lean toward the Democrats. Now they’re “toss ups.” Titus’s seat, which had not even been considered competitive in 2020, is now rated “lean Democratic.”

In a 1986 Supreme Court decision concerning district lines, Justice Sandra Day O’Connor noted that “an overambitious gerrymander can lead to disaster for the legislative majority: because it has created more seats in which it hopes to win relatively narrow victories, the same swing in overall voting strength will tend to cost the legislative majority more and more seats as the gerrymander becomes more ambitious.” Thirty-six years later, Democrats may learn that lesson the hard way.