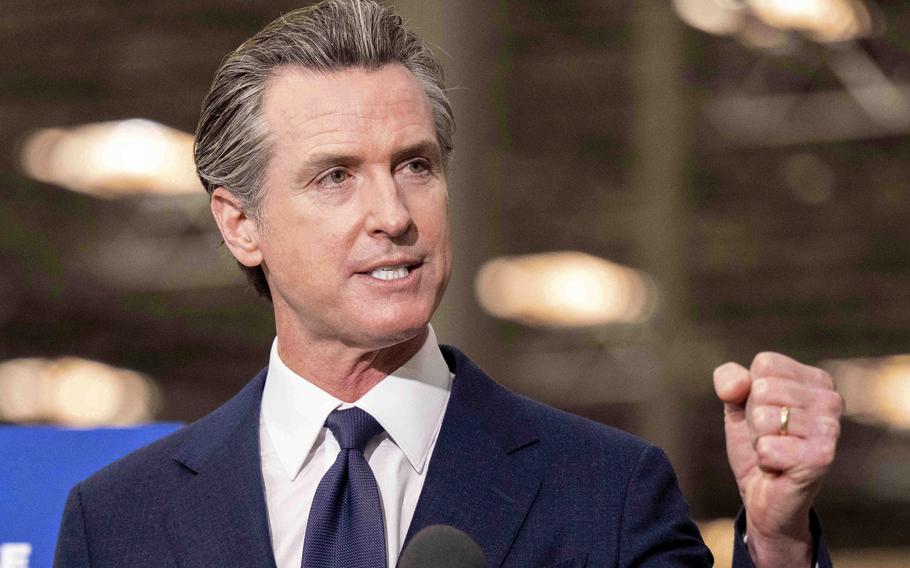 Gov. Gavin Newsom announces the next phase of California’s COVID-19 response called “SMARTER,” during a press conference at the UPS Healthcare warehouse in Fontana, Calif., Thursday, Feb. 17, 2022. Should a family of four, earning $96,000 annually and living in the country illegally, be eligible to receive taxpayer-funded cash gifts totaling $36,000 over the next three years? Politicians in Los Angeles County, Calif., believe so.  (Watchara Phomicinda/The Orange County Register/SCNG via AP)

Should a family of four, earning $96,000 annually and living in the country illegally, be eligible to receive taxpayer-funded cash gifts totaling $36,000 over the next three years? Politicians in Los Angeles County, Calif., believe so. And like so many other recent bad ideas, it’s being bankrolled in the name of federal COVID relief.

LA County has been accepting applications for a lottery that will divide a $36 million prize among 1,000 lucky winners, each of whom will receive $1,000 per month for 36 months. Officials boast that their “Guaranteed Income Program” will “come without the scrutiny and work requirements of certain public benefits.” And this time they mean exactly what they say: Winners aren’t even required to complete follow-up surveys and interviews.

While the researchers behind the program set a lofty goal to “determine the impacts of guaranteed income on the overall health and wellbeing of recipients,” the only data they are certain to obtain is a list of transactions made with the debit cards used to pay winners. They can be expected to inform us that the vast majority of winners spent their windfalls at ordinary stores, like ordinary people, just like they did in a similar program in Stockton.

They may even find that those who respond to their voluntary survey report slightly better physical, mental or financial health. After all, who wouldn’t expect to be a bit better off after getting an extra $1,000 every month, with no strings attached? Even if they aren’t, those who respond to the survey may feel they should report an improvement in their life circumstances, if only to show appreciation for such a substantial gift.

The researchers are guaranteed not to report one thing, however: that the Guaranteed Income Program is not feasible as a long-term national policy. Expanding the program to provide the same $1,000 per month to every current resident of the United States would cost $4 trillion per year. Paying for this would require more than doubling federal revenue. That would require Washington to gobble up an additional 17 cents of every dollar of U.S. GDP — a level of taxation that would cripple the economy.

Furthermore, with world GDP hovering around $11,000 per capita, a guaranteed payout of $12,000 per year would attract an overwhelming flood of illegal immigrants, driving costs through the roof. Even with literally all the money in the world, a program like this is simply not affordable.

Thankfully, the choice is not between providing no-strings-attached universal handouts and leaving those in need to fend for themselves. In fact, the most popular and effective alternative is a means-tested welfare system with precisely the “scrutiny and work requirements” the sponsors of the Guaranteed Income Program find so objectionable.

More than 90% of the public agrees that “able-bodied adults who receive cash, food, housing and medical assistance should be required to work or prepare for work as a condition of receiving those government benefits.” And history proves that they are correct.

The 1996 federal welfare reforms introduced the principle of reciprocity to the welfare system, requiring beneficiaries of the primary cash welfare program for families with children to take positive steps toward self-support in exchange for assistance. After these reforms were implemented, the overall child poverty rate — which had remained largely frozen for decades — dropped dramatically.

Children today are half as likely to live below the official poverty threshold as were children in 1996. Deep child poverty (with resources less than half the official poverty threshold) has been nearly eliminated. Moreover, the rapid disintegration of the family came to a halt, as the percentage of children raised by two biological parents has remained relatively constant since welfare reform.

Recent Biden administration proposals for a permanent child allowance, which violate the principle of reciprocity, would enable long-term dependence, undermine work and marriage, and ultimately harm poor families. Instead, Congress should reform other welfare programs, such as the Earned Income Tax Credit and Additional Child Tax Credit cash grant programs, to reduce waste and fraud and redirect the savings to remove marriage penalties and encourage American families to thrive.

The LA County “experiment” is just the latest effort to disregard and deliberately undermine the success of welfare reform. Policymakers should reject proposals that threaten to destabilize marriage and erode the tremendous progress made over the past quarter century in the fight against child poverty.

Jamie Bryan Hall, a research fellow at The Heritage Foundation, specializes in the quantitative analysis of welfare programs.