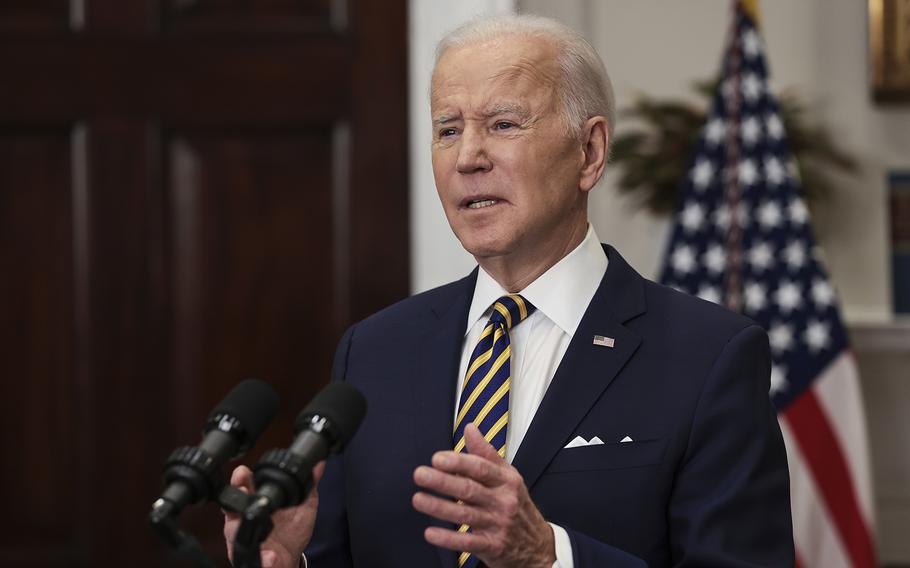 Last week, President Joe Biden sent Congress his proposed defense budget for the next fiscal year: an $813 billion wish list, almost $60 billion more than he requested a year ago — more military spending than any president, including Donald Trump, has requested since World War II.

Once Congress approves the request — and, in all likelihood, makes it bigger — U.S. defense spending will be larger in inflation-adjusted dollars than it was at the height of the Vietnam War or President Ronald Reagan’s Cold War buildup.

Only two years ago, when Biden was running for president, progressives in the Democratic Party hoped disengagement from Iraq and Afghanistan would produce a “peace dividend” — savings on defense that could be plowed into domestic priorities.

You might think it was the Russian invasion of Ukraine that sank that prospect — and moderate Democrats are sure to cite the war in Europe when they argue for more defense spending.

But Biden, who grew up as a Cold War Democrat, never promised deep defense cuts. Instead, he said, he’d look for ways to steer military spending toward “smart investments in technologies and innovations” in harmony with his domestic policies.

And the Pentagon wrote most of its budget proposal long before Russian tanks crossed the border.

As a share of the budget, spending on Ukraine is “fairly minimal so far — only a little over 1% of the request,” William D. Hartung, a defense budget expert at the dovish Quincy Institute for Responsible Statecraft, told me.

In Biden’s eyes, the biggest threat is China — just as it was in the view of his predecessor.

China remains “our most consequential strategic competitor … (with) the military, economic and technological potential to challenge the international system and our interests within it,” a top Pentagon official said.

“At a time when we are already spending more on the military than the next 11 countries combined, no, we do not need a massive increase in the defense budget,” Sen. Bernie Sanders, of Vermont, thundered.

Many of them agree with Biden about the need to counter China’s increasing power. And in a congressional election year, Democrats in closely divided districts don’t want to leave themselves open to GOP charges that they are soft on defense.

Another reason for the spending increase is more mundane: inflation. Rising civilian wages are forcing the military to hike its pay rates to attract qualified recruits. Even with its big increase, the Biden budget won’t keep pace with inflation if prices keep rising at the current 7% or more. Republicans have seized on that as their most powerful argument; they’re demanding a real increase of 5% on top of inflation, and they’ll probably get part of it.

The debate among Democrats will be passionate, pitting progressive budget-cutters against moderate deal-makers, plus vulnerable House members from districts with lots of defense jobs. One of those, Rep. Elaine Luria, of Virginia, weighed in last week with a series of salty tweets.

“I have delayed putting out a statement about the defense budget because frankly it would have been mostly full of words you might expect from a sailor, but here goes: It sucks,” wrote Luria, a retired Navy officer. “If you want to grow the Navy, stop decommissioning more ships than you build.”

The outcome of the debate, however, is not much in doubt. In addition to defense supporters like Luria, other Democrats are willing to support more defense spending partly because they see it as a bargaining chip they can offer Republicans in exchange for more spending on their domestic priorities.

“Most Democrats have already given up on cuts,” noted Todd Harrison, a defense budget expert at the Center for Strategic and International Studies. “They’ve adopted a strategy of parity instead: ‘OK, you get more for defense, but give us more for domestic spending in exchange.’”

All those elements have combined to deliver big bipartisan majorities for defense spending, even in the Democratic-led House of Representatives. Last month, the House voted down a series of progressive amendments to cut defense programs and approved a big spending increase by a lopsided bipartisan tally of 361 to 69.

Bottom line: The days of expecting a peace dividend are gone.

If you’re looking for evidence that we’ve entered a new version of a Cold War, bipartisan support for bigger defense spending should be all the proof you need.