Billed as the first summit of the Abraham Accords, the gathering in the Negev desert Monday of foreign ministers of Israel, Morocco, the United Arab Emirates and Bahrain, along with U.S. Secretary of State Antony Blinken, was certainly unprecedented. Two years ago, the three Arab foreign ministers wouldn’t have agreed to pose for photographs with their Israeli counterpart at the United Nations, never mind on his home soil.

There was more to it than a photo-op. Although the government of Prime Minister Naftali Bennett basked in his country’s newfound convening power, the meeting also demonstrated that the 2020 accords — under which four Arab states normalized relations with Israel — are a practical framework for cooperation on mutual benefits, such as trade ties, as well as common threats, such as Iran. (Egypt, which made peace with Israel in 1979, sent its foreign minister to the gathering, too.)

It is also a useful platform for the country that midwifed the accords. Blinken used the opportunity to try to reassure the other attendees that the countries won’t be imperiled if the U.S. rejoins the 2015 nuclear pact with the Islamic Republic, a foreign-policy priority of his boss, President Joe Biden. Blinken also implored them to take a firmer line against Russia over its invasion of Ukraine. (On both scores, they responded with varying degrees of skepticism.)

Yet while symbolizing the progress that has been made under the accords, the meeting served as a reminder that the Israeli-American diplomatic initiative has made no headway in more than a year. Biden and Bennett have been unable to add a single nation to the normalization papers since their predecessors, Donald Trump and Benjamin Netanyahu, left office.

This is especially galling for Bennett, who talked up the accords in a speech to the United Nations General Assembly last fall, adding that “more is to come.”

Not only has the Israeli leader failed to deliver on that promise, at least one of the existing signatories may be developing second thoughts: Sudan chose not to send a representative to the Negev event. Ahead of the meeting, Gen. Abdel Fattah al-Burhan, the military strongman in Khartoum, was at pains to deny that there had been any top-level official visits in either direction. Abdalla Hamdok, the civilian leader who signed the accords, was arrested, then reinstated and finally squeezed out by the military, with little protest from Israel.

Burhan hasn’t repudiated the accords, but has made it clear he wishes to keep Israel at arm’s length by limiting cooperation to security matters.

The three other Arab signatories to the pact are keen on deeper relations, including tourism and cultural exchanges, but their enthusiasm hasn’t been as contagious as Israeli and American officials might have hoped. Indeed, the countries that had seemed the most likely to join the bandwagon a year ago — Oman and Qatar — are no closer to signing up. Both countries are content merely to maintain unofficial relations with Israel. Others, like Kuwait, have made it clear they won’t contemplate normalization before Israel has come to a settlement with the Palestinians.

And the prospects of a breakthrough with Saudi Arabia, briefly raised by Netanyahu’s poorly kept secret visit to the kingdom in late 2020 to meet the de facto ruler, Crown Prince Mohammed bin Salman, now seem remote. The prince, resentful of being snubbed by the U.S. president, is in no mood to give Biden the opportunity to match Trump’s bragging rights by joining the accords.

Nor is Biden, who has made pivoting away from the Middle East a foreign-policy priority, likely to invest much diplomatic capital in entreating other Arab states to recognize Israel.

Might he enrage them into doing so? There is a double bank-shot of a chance that could happen. If Biden does bring the U.S. back into the nuclear deal and allow Iran to acquire more military means with which to menace its Arab neighbors, some of them might just make common cause with Israel. Sowing discord is hardly the most auspicious way to promote the accords. But the Israelis would probably take it. 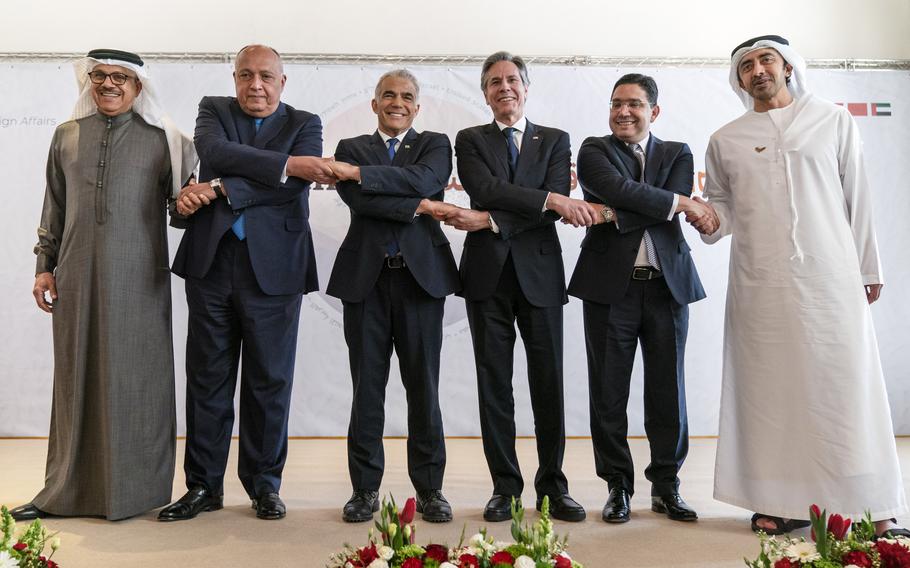