2 sides can’t get to a clear Ukraine peace deal

The war in Ukraine, which just entered its second month, shows no sign of ending soon.

Russia’s huge but incompetent army has been stymied in its attempts to seize the Ukrainian capital, Kyiv, and other cities. Ukraine’s defenders have put up a heroic fight, but civilians in besieged towns are suffering a terrible toll. Neither army appears ready to quit. Each side thinks it still has a chance to outlast the other.

That, diplomats say, is why the chances for a cease-fire look so dim — even though, oddly enough, the ingredients of a deal to end the war are in plain sight.

In recent talks — some public, others private — officials from both countries have suggested possible compromises.

Ukraine’s Volodymyr Zelenskyy has offered one public concession: He’s willing to abandon his quest for membership in NATO, which Russia’s Vladimir Putin initially said was the reason for the war.

“We are told that we cannot enter (NATO),” Zelenskyy said recently. “It is true, and it must be acknowledged.” He has suggested that Ukraine could accept formal “neutrality,” but only if the United States and other countries guarantee its security against another invasion.

Putin may have tacitly lowered his ambitions, too. He initially demanded the “denazification” of Ukraine’s government — his pejorative term for replacing the democratically elected Zelenskyy with a pro-Russian president. In recent weeks, Russian officials have stopped mentioning that demand.

A top Russian general made it sound as if Moscow has scaled back its military aims, too.

In an official briefing on Friday, Army Maj. Gen. Sergei Rudskoi, the equivalent of a deputy chief of staff, claimed that Russia never intended to seize Kyiv. Russian forces, he said, will now focus on gaining full control of Donetsk and Luhansk, the two regions in eastern Ukraine where pro-Russian rebels have declared independence.

But Putin has other, steeper demands. He has insisted that Zelenskyy accept Russia’s annexation of Crimea, which Russian troops seized in 2014, and recognize the independence of Donetsk and Luhansk.

Zelenskyy and his aides have rejected those land grabs and have demanded that Russia withdraw from all of Ukraine. But they have offered what one former diplomat called a creative compromise: While they won’t agree formally to Russia’s annexation of any part of their country, they will promise to pursue reunification only by peaceful means.

The two sides have been talking sporadically, but they remain far apart on those key issues. The underlying problem, current and former U.S. officials said, is that Putin still appears to believe his forces can win.

“Putin doesn’t sound as if he’s decided to settle,” Alexander R. Vershbow, a former U.S. ambassador to Russia, told me. “He hasn’t given up hope that his forces will regroup. So now, instead of fighting everywhere in Ukraine, they appear to be focusing on one or two fronts, to see what more they can get” — a kind of salami-slice strategy.

Meanwhile, he added, Ukraine’s forces are running low on the anti-aircraft and anti-tank missiles they used to great effect in the war’s opening weeks.

“The Ukrainians have been heroic, but they can’t go on forever,” he said. “They need a faster supply process. ... That, more than anything else, will contribute to a decision by Putin to negotiate.”

Meanwhile, he said, it’s not too early for U.S. diplomats to consider what the elements of a peace settlement should be — because some of them will involve pledges from our side.

“The hardest part will be security guarantees for Ukraine,” he said.

The U.S. and its allies won’t provide the sort of defense guarantee that NATO membership brings, he said, but they should consider formalizing their current security relationship with Ukraine: guarantees of military supplies, intelligence help and economic aid.

“It could include limits: no foreign bases in Ukraine, no offensive weapons that could threaten Russia. But the Ukrainians should have the right to a robust army that will receive assistance from other countries when they need it.”

Aid to Ukraine, as well as sanctions on Moscow, may be needed for years — a daunting prospect for European countries that depend on Russia for gas and oil.

But a full-scale peace agreement will be difficult to negotiate, in part because of those insoluble territorial disputes, Vershbow warned.

“They might just revert to a state of no war, no peace. ... It could leave the two countries in a long-term, low-level conflict. That’s the most depressing scenario, but maybe the most likely one.”

Neither side will triumph. Both sides will be damaged, battered, angry and resentful. The hard part will be ensuring that whatever truce they negotiate can be made to stick — to ensure that this isn’t just the first chapter in a much longer war. 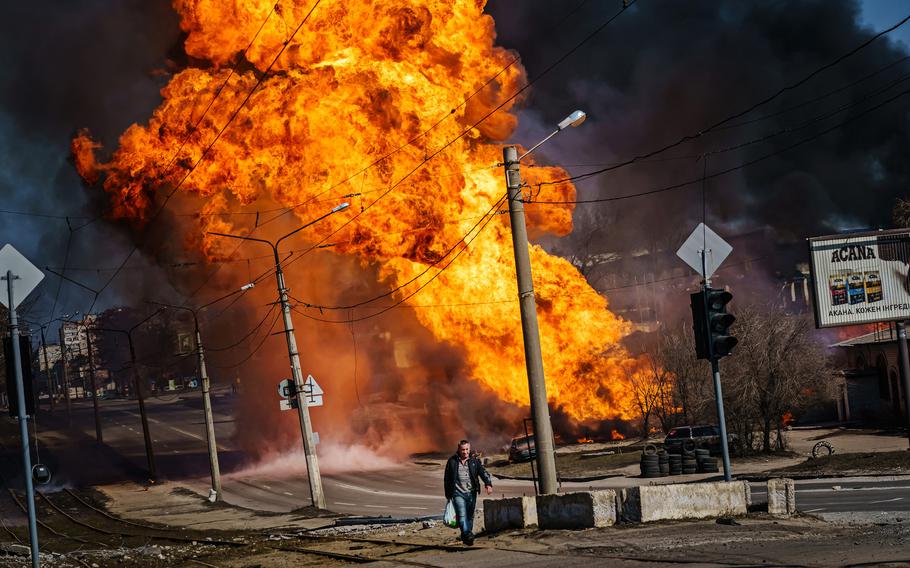 A man hurries away from a building that had just been struck by Russian bombardment in the Moskovskyi district in Kharkiv, Ukraine, on Friday, March 25, 2022. (Marcus Yam, Los Angeles Times/TNS)