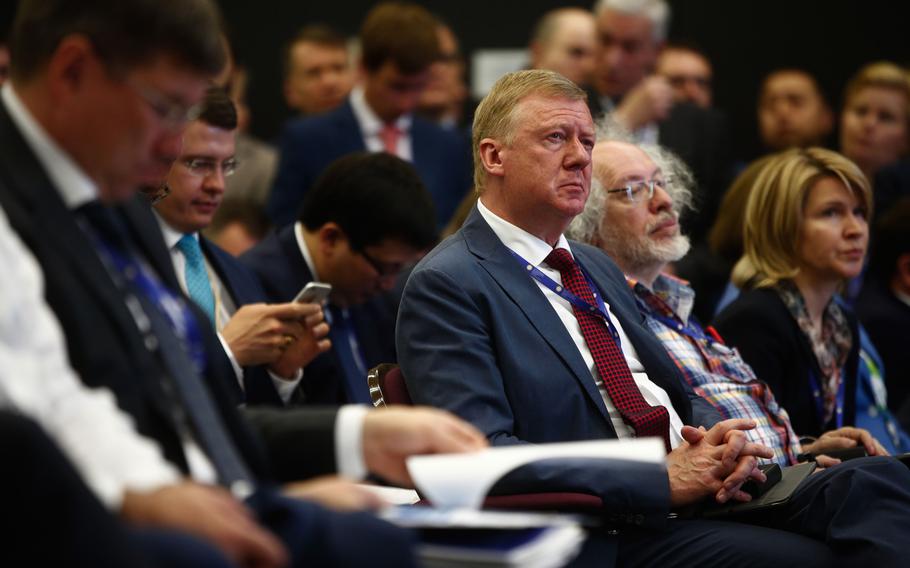 Anatoly Chubais sits in the audience during a panel session on the opening day of the St. Petersburg International Economic Forum 2016 (SPIEF) in Saint Petersburg, Russia, on June 16, 2016. (Simon Dawson/Bloomberg)

It’s a defection already being brushed off by the Kremlin as a “personal” issue. Of course. The truth is that as Moscow gets bogged down in a Ukrainian war far more costly than imagined, the abrupt departure of a crucial figure of the post-Soviet years - a man who helped push Vladimir Putin into power by giving him his first Kremlin job - will sting.

Anatoly Chubais’s name evokes the mayhem and hope of that first decade of post-communist life. He was an economist, a market reformer, a red-haired pioneer under Boris Yeltsin who launched a thousand asset sales. At breakneck speed, Chubais dismantled a decrepit economic system and, in the process, turned a handful of men into billionaires. He’s frequently been blamed (even targeted) for the unequal distribution of wealth that resulted, but he described his choice at the time as “between bandit communism or bandit capitalism.”

Now, Chubais has left an increasingly isolated Russia behind, apparently for Turkey, in the highest-profile desertion since Putin’s ill-fated invasion of Ukraine began a month ago. But there is no room for doubters. Putin, ratcheting up his threatening rhetoric, has talked of “cleansing” the country and warned of a “fifth column” of “national traitors.”

In weighing up what this eye-catching departure means for a regime under pressure, it’s important to consider what it isn’t.

Chubais is not an oligarch, so this exit is not a sign of mutiny among billionaires - who in any event are no longer propping up the political system as they did under Yeltsin. Nor was he any longer in Putin’s tight inner circle. That is increasingly made up of figures from the security services or those tied to the regime through hydrocarbon rents. Chubais’s last sinecure was the role of climate envoy for Putin - a president hardly bothered by the world’s carbon budget.

His was the highest-level defection so far, but arguably the most expected of the high-level defections, as Ben Noble, who researches Russian domestic politics at University College London, put it to me.

And yet he was also one of several men of the system who for years had been able to exist just outside it, in what Noble describes as a liminal space, even as Putin’s Russia darkened. Now he was forced to choose sides.

Crucially, Chubais is not alone. Bloomberg News reported on Wednesday that the highly regarded central bank governor, Elvira Nabiullina, had sought to resign after the invasion, only to be reappointed last week for a new term and left to manage the fallout from a war that has left Russia economically isolated, and has undone her work of years. Others in the economic elite - if not the political one - have signaled discontent.

Of course, those in the most distant orbit around the Kremlin speak up or leave first. Chubais has less to lose than fellow travelers from St. Petersburg’s liberal administration such as Alexei Kudrin, a former finance minister and currently the head of Russia’s Audit Chamber, or Herman Gref, who leads the country’s biggest lender, Sberbank. Their comments and actions will be worth watching.

None of this should take away from the significance of Chubais’s exit. High-profile figures outside the Kremlin are now not only calling for peace, as the billionaire Oleg Deripaska has, but also voting with their feet, with all the costs that implies. There’s no return. In an environment where few are under the illusion that the operation in Ukraine is the swift success it was supposed to be, every departure emboldens more.