The U.S. risks paying a high price for a nuclear deal with Iran 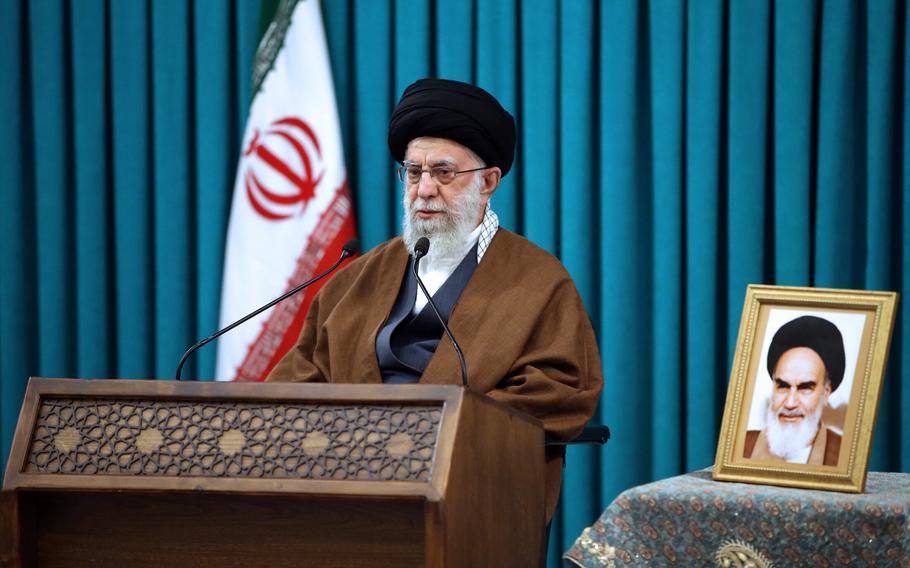 In this photo released by the official website of the office of the Iranian supreme leader, Supreme Leader Ayatollah Ali Khamenei speaks in a televised New Year speech, in Tehran, Iran, Monday, March 21, 2022. Khamenei signaled support for Tehran’s nuclear negotiations to secure sanctions relief, a rare reference to the still-halted talks as world powers near a diplomatic turning point. A portrait of the late Iranian revolutionary founder Ayatollah Khomeini displayed at right. (Office of the Iranian Supreme Leader via AP)

Joe Biden was keen to revive the Iran nuclear agreement long before the war in Ukraine began, but the rise in oil prices it has caused may have tipped the president’s eagerness into desperation. Reports from Washington suggest the administration is about to cave to Tehran’s most outrageous condition for returning to the deal: the removal of the Islamic Revolutionary Guard Corps from the State Department’s list of foreign terrorist organizations, or FTOs.

The designation makes the IRGC subject to sanctions that Tehran says must be lifted before it agrees to abide by the terms of the 2015 agreement, which was designed to prevent Iran from acquiring nuclear weapons. It is currently enriching uranium to levels far in excess of any peaceful purpose. The IRGC oversees the nuclear program, as well as Iran’s foreign policy and security apparatus.

The FTO designation has been the stickiest of sticking points during the latest round of negotiations in Vienna between Iran and the signatories of the agreement, which is known as the Joint Comprehensive Plan of Action. It’s not hard to see why Tehran wants the designation dropped: It depends on the IRGC, known to Iranians as “Pasdaran” (Persian for guards), to suppress dissent at home as well as terrorize its neighbors. These tasks would be made easier if American sanctions didn’t put financial resources and the latest weapons out of the regime’s reach.

Now the Biden administration is hinting that delisting the IRGC is one of the “difficult decisions” it may have to make in order to revive the JCPOA. But this is hard to believe. After all, the original deal was struck without a commitment to take Iran off another of the State Department’s lists, as a state sponsor of terrorism, a dubious distinction it has held since 1984, and which it currently shares with Syria, Cuba and North Korea.

As the principal instrument of the state’s terror, the IRGC has certainly earned its place on the FTO list. It is, in the words of Gen. Frank McKenzie, head of the U.S. Central Command, “the centerpiece of Iranian bad behavior” in the Middle East.

What’s more, the Pasdaran have American blood on their hands: Operating mostly through proxy militias, it is responsible for the deaths of more than 600 U.S. service personnel in Iraq. Those militias have kept up attacks on American targets, including military bases and the U.S. Embassy in Baghdad.

Tardy though it was, the IRGC’s designation as a terrorist organization in April 2019 was welcomed in countries across the region that daily live under the menace of the Pasdaran and its proxies. This network of peril includes nodes in Lebanon and Gaza, where the IRGC operates through Hezbollah and Hamas, respectively, both FTOs of longstanding; in Iraq, home to Iran-backed FTOs Kataib Hizballah and Asa’ib Ahl al-Haq; and in Yemen, where Tehran’s catspaw, the Houthis, were on the list until Biden dropped them shortly after his inauguration last year.

The delisting of the Houthis may represent the perfect prefiguration of what will likely happen if the IRGC is removed from the FTO list. The Biden administration imagined the gesture would make the Yemeni rebels more amenable to peace with the Arab coalition that has been trying to restore the government the Houthis overthrew in 2015. Instead, the Houthis have kept up a daily barrage of rocket and drone attacks against Saudi Arabia - and occasionally against the United Arab Emirates. (The munitions are supplied by Tehran.)

Unsurprisingly, Iran’s neighbors are alarmed by the prospect of Biden repeating his mistake with the IRGC. The loudest protests have come from the country that the Pasdaran’s commanders routinely vow to annihilate: Israel. “Unfortunately, there is determination to sign a nuclear agreement with Iran at almost any price, including saying that the world’s largest terrorist organization is not a terrorist organization,” Israeli Prime Minister Naftali Bennett said at a cabinet meeting last week. “That is too high a price.”

This is also the view of many Republicans - and not a few Democrats - in Washington. Bipartisan complaints that Congress is being kept in the dark about the negotiations in Vienna have led to anxiety that the White House may be willing to make too many concessions to the Iranians in order to reach a deal - and potentially allow Iranian oil and gas into a global market to replace sanctioned Russian exports.

Administration officials who have briefed the media say the IRGC would only be delisted if it promises not to attack Americans and commits to curtailing its destabilizing activities outside Iran. If it doesn’t keep its word, it can be redesignated an FTO. This might have been reassuring but for the fact that Biden is currently ignoring requests, from members of Congress as well as from U.S. allies, to put the Houthis back on the list.

If he unshackles the Pasdaran, the president will open the proverbial Pandora’s box. Enhanced by unrestrained access to money and state-of-the-art weaponry, the IRGC’s capacity for violence and terror may require a whole new State Department designation.

Bobby Ghosh is a Bloomberg Opinion columnist covering foreign affairs. A former editor in chief of the Hindustan Times, he was managing editor of Quartz and Time magazine’s international editor.