The crisis unfolding in Ukraine reminds us that geopolitics hangs in a fragile balance and that we must prepare for an uncertain future. That means not only reinforcing international alliances that can help prevent or mitigate the kind of aggression we’re seeing from Vladimir Putin’s Russia, but preparing for the future by creating energy independence. If we fail here at home to create a resilient energy sector, we risk ceding power to our increasingly volatile geopolitical adversaries.

Since the 2014 invasion of eastern Ukraine, energy dependance has been a main tool in Putin’s arsenal. The annexation of Crimea was largely about energy resources, with the Russians eventually seizing about four-fifths of oil and gas resources in the Black Sea. Today, Russia’s grip on European energy supplies is a key factor in the continent’s response to his invasion. As feared, Putin’s foray into Ukraine sent the price of oil skyrocketing to over $100 per barrel for the first time since 2014.

The response? The U.S. issued broad sanctions against Russia, including blocking the certification of the Nord Stream 2 pipeline that Putin planned to use to tighten his grip on Europe. Major energy firms such as Shell announced their intent to pull out of the pipeline project and sell their stakes in various Russian oil and gas projects. These sanctions will hurt Russia, which today provides roughly 10% of the world’s oil and which is also the world’s second largest natural gas producer. Further, the U.S. and other major oil-consuming nations are considering releasing 70 million barrels of oil from their emergency stockpiles to beat back surging crude prices.

Meanwhile, the Biden administration has been tone-deaf. With U.S. oil consumption expected to reach 17.2 million barrels per day, higher than before COVID-19, and Americans concerned about gas prices, President Joe Biden has repeatedly asked OPEC+ nations like Saudi Arabia and Russia to increase oil production. Meanwhile, White House press secretary Jen Psaki has argued that switching over to renewable energy is the solution to the U.S. decreasing its reliance on foreign oil. Psaki downplayed the role of domestic energy production, specifically calling out the Keystone XL pipeline by saying that the project “was not processing oil through the system” and wouldn’t “solve any problems.”

The reality is that increasing domestic energy supplies is exactly the solution to reducing America’s dependence on foreign oil supplies and providing long-term price relief. The Keystone XL pipeline would move up to 830,000 barrels of oil a day from Canada, more than enough supply to cancel out the nearly 672,000 barrels per day of Russian oil the U.S. imported in 2021. We could take advantage of North American energy instead of handing “a strategic weapon to dictators that they will turn around and use against us,” as The Wall Street Journal recently put it.

Unfortunately, the Biden administration is moving in the opposite direction. Rather than first securing energy independence through domestic oil production and then adding in a mix of renewables, one of Biden’s first orders was to direct the interior secretary to halt new leases on federal lands. The administration followed that recently by delaying decisions on permitting for new oil and gas leases. These decisions effectively take U.S. energy off the table and hamstring American producers.

More bad news could be coming. The Department of Interior’s five-year offshore leasing plan is set to expire on June 30 and the Biden administration has not committed to extend it. By not committing to future leases, the president is jeopardizing American investment and risking even greater American reliance on foreign oil. He’s also risking important funding for conservation and restoration, as offshore oil and gas revenues are a major source of funding for the Land and Water Conservation Fund and for coastal protection programs in states like Alabama, Louisiana, Mississippi and Texas.

As Sen. Joe Manchin, D-W.Va., recently remarked to officials at the Federal Energy Regulatory Commission, “We can’t bring a knife to a gun fight -- or in this case, an energy war.” Manchin was rightfully admonishing FERC officials that the U.S. can’t afford to “deny or put up barriers to natural gas projects and the benefits they provide while Putin is actively and effectively using energy as an economic and political weapon against our allies.”

In Manchin’s terms, the U.S. has a gun; it’s just not fully loaded. With some of the world’s most abundant oil and gas reserves, it’s time we stop restricting American energy production and use our resources to both stymie Russia and stabilize oil and gas prices. To do this, the administration should lift the ban on federal leasing and call on the Federal Energy Regulatory Commission to reverse its new pipeline permitting policy. With these two steps alone, policymakers can set the U.S. on a strong course toward energy independence and stable energy prices. 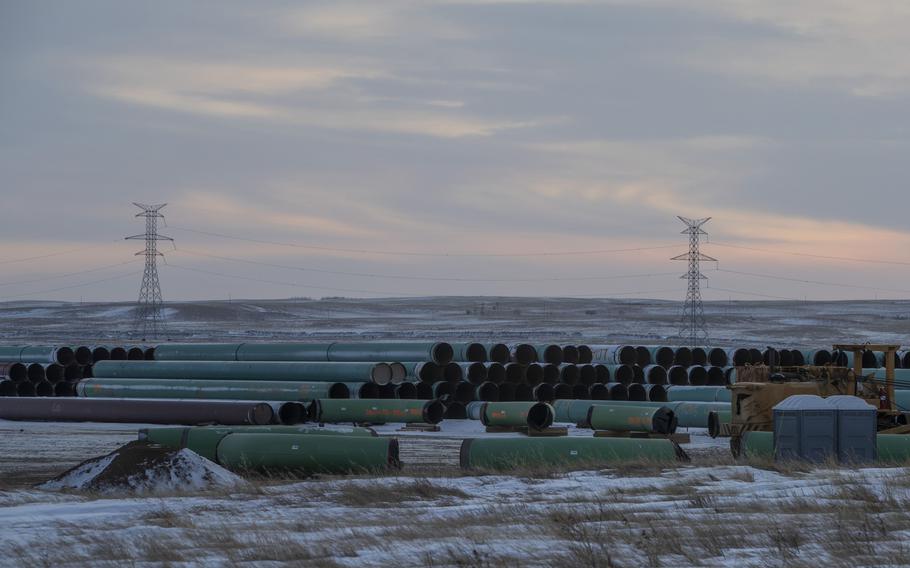 Pipes for the Keystone XL pipeline stacked in a yard near Oyen, Alberta, on Jan. 26, 2021. (Jason Franson/Bloomberg)