Will Russians continue to support Putin’s war in Ukraine? 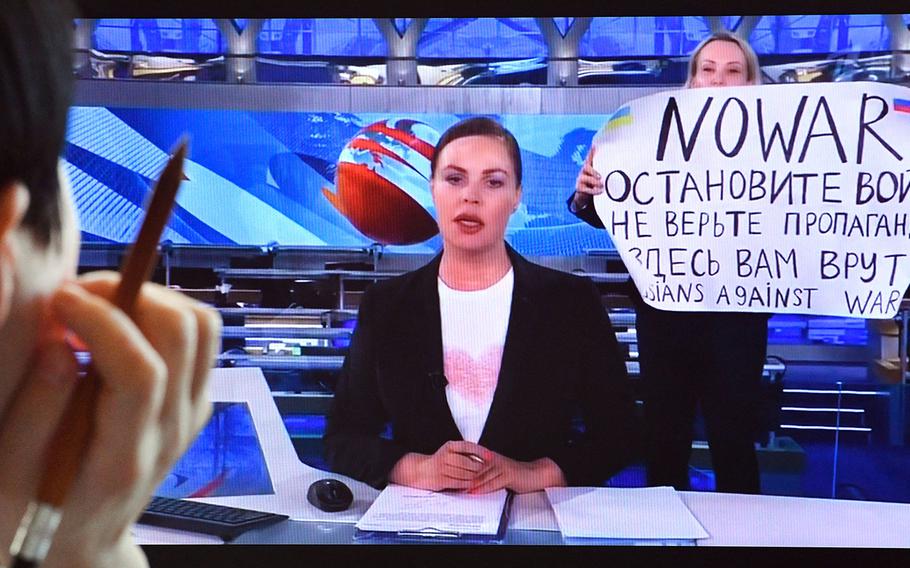 A woman looks at a computer screen watching a dissenting Russian Channel One employee entering Ostankino on-air TV studio during Russia’s most-watched evening news broadcast, holding up a poster which reads as “No War” and condemning Moscow’s military action in Ukraine in Moscow on March 15, 2022. - As a news anchor Yekaterina Andreyeva launched into an item about relations with Belarus, Marina Ovsyannikova, who wore a dark formal suit, burst into view, holding up a hand-written poster saying “No War” in English. (AFP via Getty Images/TNS)

Western officials worry openly that there are no clear off-ramps to end Russia’s invasion of Ukraine. With a protracted and even deadlier war looking ever more likely, will Russians tolerate the invasion’s increasing costs? Or will Vladimir Putin, a highly popular autocratic leader for 20-plus years, lose ordinary Russians’ support?

As Putin massed a large invasion force at the Ukrainian border in late 2021, polls showed that less than 1 in 10 Russians believed Moscow “should send military forces to fight against Ukrainian government troops.” By mid-February, as the Russian military staged massive exercises, another poll - framing the use of force as an effort to repel Ukraine’s NATO aspirations - found that 1 in 2 Russians believed force would be justified. A week after the invasion, 58% of Russians reportedly supported the invasion of Ukraine.

What do these and other polls tell us? We’ve studied Russians’ self-reported willingness to sacrifice for their country, comparing Russians’ patriotic attitudes to those of people in other countries. Our research finds that Russians have consistently expressed greater willingness to sacrifice their material well-being in the interests of their country’s military goals - and are more willing to accept conflict with other nations to defend Russian interests.

Our analysis of more than two decades of polling data from the International Social Survey Programme (ISSP) and the World Values Survey (WVS) also finds Russians feel a stronger obligation to support their country, right or wrong, than people in virtually any other country.

Here’s what Russian patriotism looks like relative to that of other citizens around the world.

Writing on patriotism often distinguishes between a benign form manifested as pride in and love for one’s country - and aggressive militarism that demands blind and uncritical allegiance. The international surveys we draw on ask questions that get at this distinction.

In addition to questions on benign patriotism (such as, “How proud are you to be a citizen of [your country]?”), ISSP surveys ask respondents around the world how much they agree with statements that reflect less benign, blind patriotism. Examples include “[My country] should follow its own interests, even if this leads to conflict with other nations” and “People should support their country even if it is in the wrong.”

In our analysis of thousands of responses, we compare Russia to other countries that participated in the same waves of the ISSP and WVS surveys.

How do Russians compare?

In each of the three ISSP waves - 1995, 2003 and 2013 - Russians showed more support than people in any of the other 15 surveyed countries (12 European nations, the United States, the Philippines and Japan) for this statement: “My country should follow its interests even if this leads to conflict with other nations.” In each of the same three survey waves, Russians were either the most or second-most likely to agree with the statement that “people should support their country even if it is in the wrong.”

In the mid-1990s and 2000s, Russians also demonstrated greater support than people in other countries for increased military spending, even at the cost of higher taxes. Relative support fell off in the third wave of surveys.

Russians appear to be far more patriotic, consistently and significantly exceeding attitudes of people of other countries on the ISSP measures of “blind” patriotism, and of most other countries on the WVS measure. These results are not due to Russians having higher levels of “benign” patriotism, nor are they due to differences in the age structure, level of education or other demographic features of Russian society.

Even Russia’s younger generations are distinctive relative to youths in other countries. Russians born after 1976 expressed the highest degree of support for the statement “People should support their country even if it is in the wrong,” in surveys conducted in both 2003 and 2013. In the same years, their endorsement for the statement that “[My country] should follow its own interests, even if this leads to conflict with other nations” came out, respectively, on top or in second place, compared with respondents in other countries.

What’s behind these findings?

Although it is now common to view Russian state media as taking a central role in shaping popular attitudes, our analyses show that Russians’ blind patriotism actually predates Putin. A prioritization of “strong defense forces” over economic growth and democratic freedoms first appeared sometime between 1990 and 1995, suggesting that the humiliation of the Soviet collapse may be the cause.

Interestingly, the 1991 demise of the Soviet Union did not produce “blind” patriotism everywhere in the post-Soviet space. While Russia and Ukraine share a Soviet legacy, blind patriotism appeared only in Russia after the collapse of the communist regime.

This resonates with the “post-imperial syndrome” described by Yegor Gaidar, an economist who served as Russian prime minister in 1992. Political scientist Emil Pain attributed Russia’s new nationalism to the “imperial syndrome” that took root in the mid-1990s.

Starting in November, as Russian troops began mobilizing along the Ukrainian border, until just before the Feb. 24 invasion, Putin’s approval rating climbed from 63 to 71%. We should keep in mind that Putin has almost never been so popular as in the aftermath of military operations in Georgia in 2008 and Ukraine in 2014.

These approval levels suggest that Putin’s decision to invade Ukraine isn’t likely to lose him the Russian street. To be sure, tens of thousands of Russians have protested the war, despite severe government restrictions on dissent and public gatherings.

Russia is a country of more than 140 million people, however. A drawn-out war that brings more Russian casualties and greater economic pain will no doubt put Putin’s popularity to the test. But we should be under no illusions as to how quickly that will happen - or whether it will happen at all.

Michael Alexeev is a professor of economics at Indiana University. He is the co-editor of The Oxford Handbook of the Russian Economy (Oxford University Press, 2013).

William Pyle is the Frederick C. Dirks Professor of International Economics at Middlebury College, where he studies economic institutions in Russia and other post-socialist countries.