Would Americans fight for their homeland like Ukrainians? A recent poll is discouraging.

Like most Americans, I’ve spent the last few weeks contemplating the implications of Russia’s unprovoked invasion of Ukraine, including those that extend beyond ever-increasing gasoline prices and grocery bills.

As I was explaining to my inquisitive 6-year-old, war is, sadly, a perennial state of human existence.

This isn’t the first war of her lifetime, and no matter how much we strive for peace throughout the world, it won’t be the last. But unlike the wars of the recent past — even those in which U.S. troops were committed — the fight in Ukraine feels closer to home.

The images and stories of ordinary men taking up arms, of women constructing Molotov cocktails in their town squares and of families resolutely hunkering down in defense of their nation are as terrifying as they are compelling.

They are hopeful, too. They remind us that when their culture, freedoms and way of life are under assault, many people will risk and even lose their own lives to ensure their long-term survival.

What would we do in such circumstances? A recent Quinnipiac University poll posed that same question to Americans: Would you stay and fight or leave the country?

“When confronted with a terrible hypothetical that would put them in the shoes of the Ukrainians, Americans say they would stand and fight rather than seek safety in another country,” said Quinnipiac polling analyst Tim Malloy.

That’s one way to spin it, I guess.

For me, the fact that just under half of my friends and neighbors would hypothetically abandon their homeland and all it stands for in the face of a foreign invader is less than encouraging. Many people don’t even seem to have hypothetical patriotism, let alone fortitude.

That’s not wholly surprising given that so much of the recent discontentment with America is concentrated among the youth.

Equally unsurprising is that political differences also play a role in willingness to defend our nation. Republicans (68%-25%) and independents (57%-36%) said they would stay and fight, while Democrats said, 52%-40%, that they would leave the country. That seems consistent with our political divide. Many people on the left find America, because of its historical failures and present-day inadequacies, unworthy of our defense.

But there are elements of that thinking on the political right now, too. For all the chest-thumping of the MAGA right, a surprising number of people believe that the U.S. — much like Ukraine — has brought destruction upon itself and any attack would be wholly warranted if not deserved.

I don’t disagree that we are a decadent society — one that has generally enjoyed so much freedom for so long that we have sometimes lost all perspective. To wit, I received a promotional email this month from a children’s clothier explaining that, in an effort to defend the children of the world from ongoing “violence and discrimination,” it would donate equal amounts to a domestic LGTBQ nonprofit and an international aid organization. As if transgender policies in Texas and Florida (even if one believe them to be misguided) are the moral equivalent of deadly rocket attacks on a children’s hospital in Ukraine.

America, in spite of its shortcomings and failures, is worth defending. Our highest ideals — liberty, equality and democracy — would never be truly achieved if we were to turn and run from an invader. While I have no delusions about my ability to fight, if we ever faced an existential crisis like the people of Ukraine now face, I would choose to stay. I hope more of us would do the same. 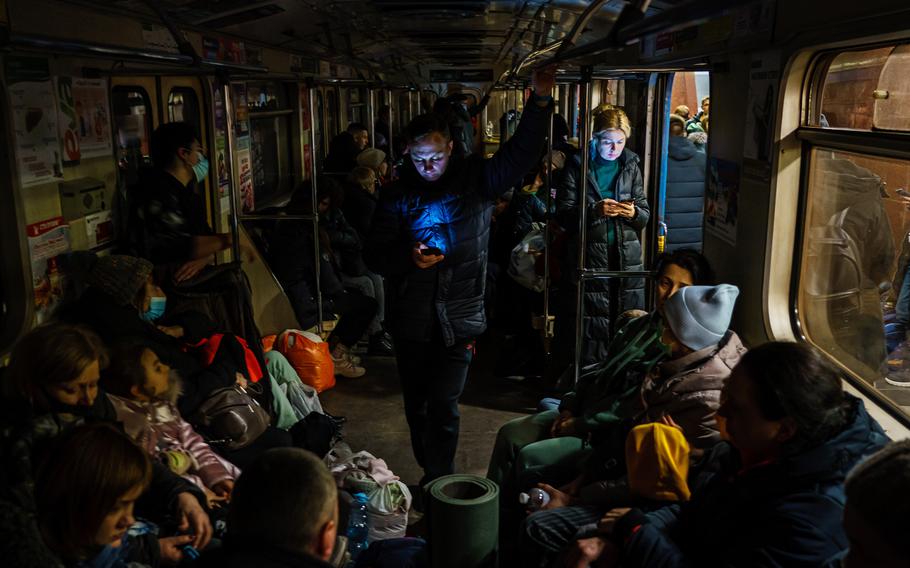 Hundreds of people seek shelter underground, on the platform, inside dark train cars, and even in the emergency exits, in metro subway station as the Russian invasion of Ukraine continues, in Kharkiv, Ukraine, Thursday, Feb. 24, 2022. (Marcus Yam, Los Angeles Times/TNS)