China wanted to appear neutral between Russia and Ukraine. It isn’t.

When Russia invaded Ukraine last month, a spate of wishful thinking ran through the West that China, a great power with friends on both sides, might step in to mediate a cease-fire.

China’s government struck a pose of neutrality, called for a peaceful resolution and said it supported the principle of “territorial integrity.” Ukrainian President Volodymyr Zelenskyy made a public plea to China’s Xi Jinping to intervene.

But Xi has been missing in action — and in practice, his policies have been far less neutral than advertised.

China hasn’t condemned the invasion and initially didn’t even call it a war. It still hasn’t acknowledged which country’s tanks crossed the other’s borders.

Xi has talked by telephone with Russian President Vladimir Putin, but he hasn’t talked with Zelenskyy.

Meanwhile, China’s Foreign Ministry has endorsed Russian propaganda claims that the U.S. military is running bioweapons laboratories in Ukraine. The charge is false; the U.S. has funded programs to destroy old bioweapons, not produce new ones.

There’s a contradiction at the heart of China’s foreign policy. China wants to be seen as a neutral power. But the way it calculates its interests — giving top priority to reducing the global influence of the United States — makes neutrality on issues involving Russia, its biggest ally, almost impossible.

Less than three weeks before Russia’s invasion of Ukraine, Xi welcomed Putin at a summit meeting in Beijing and declared that their partnership had “no limits.”

“China’s policy is based on Xi Jinping’s view of China’s interests, and he sees the United States as implacably hostile,” Bonnie Glaser, a China scholar at the German Marshall Fund, told me. “He sees Russia as his only ally against the United States and the other democracies. ... I don’t think China can in any way be neutral.”

The war in Ukraine may have “unsettled” China’s leaders, but it doesn’t appear to have shaken the Xi-Putin partnership, CIA Director William Burns told Congress last week.

China “has invested a lot in the relationship,” Burns said. “I don’t expect that to change anytime soon.”

Economics is the first: China’s prosperity depends on global trade, not trade with Russia, so it wants to avoid running afoul of the massive sanctions the U.S. and its allies have put in place against Moscow. Last week, Russian officials reported that China had turned down an emergency request for aircraft parts, apparently to maintain Chinese access to Western suppliers like Boeing and Airbus. But on a less visible level, Chinese banks are working with Russian banks to use China’s UnionPay to replace Visa and Mastercard, shut down by sanctions.

The pattern, Feigenbaum said, is an attempt to “straddle” the sanctions: complying where necessary, but still looking for opportunities to make deals with Russia.

A second limit involves China’s desire to maintain a good relationship with Europe, where most countries have been quick to support Ukraine.

“There’s a potential for China’s relationship with the European Union to get much worse,” Feigenbaum said. “China may want to avoid that.”

One limit that hasn’t seemed to affect China’s policies, though, is Beijing’s long-standing adherence to principles of sovereignty and territorial integrity. “They have essentially jettisoned those principles,” Feigenbaum said.

For all those reasons, the idea that China might serve as a neutral mediator to help end the war never had much of a chance.

In any case, it probably wasn’t very workable. China’s diplomats have little experience mediating international disputes, least of all in Europe. And while officials from Ukraine and Russia have met three times, their positions have been too far apart to produce even a temporary cease-fire.

But China was never neutral to begin with. And that reflects what may be the most important fact about the new world disorder that Putin’s invasion has unleashed:

China’s Xi has made a choice. He believes the coming decades will be dominated by confrontations between the United States and China, with Russia as China’s sole important ally.

For anyone pondering the parallels between this new period and the Cold War, there’s an eerie echo of the Sino-Soviet alliance that once sought to dominate Eurasia — only this time, with China as the senior partner. 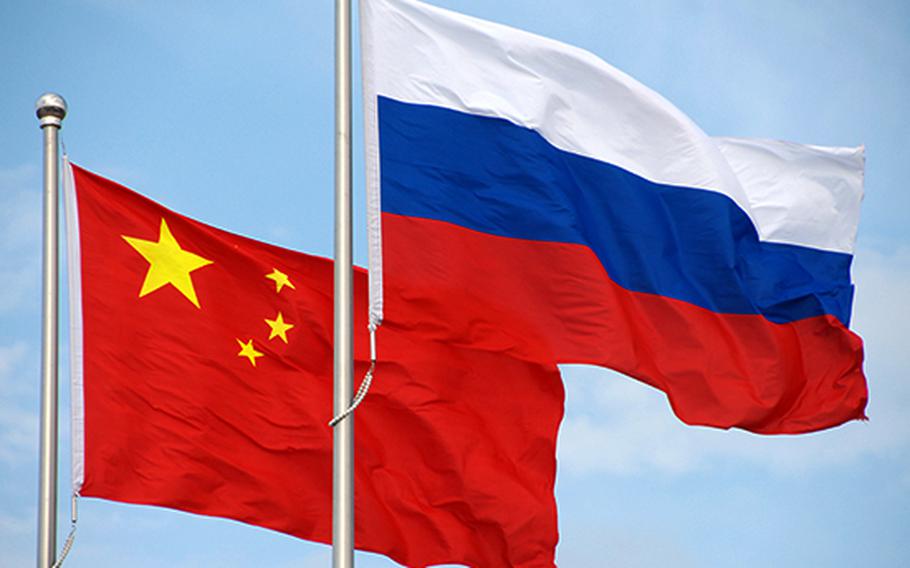 The flags of China and Russia are shown in this undated image. (Wikimedia Commons)