In Russia’s war against Ukraine, many Americans will make sacrifices unlike any they have recently experienced in foreign policy. This cost is in stark contrast to the longest wars for which the United States had troops on the ground in harm’s way, in Afghanistan and Iraq. In each those wars, the military felt (often rightly) that they were fighting on their own. Now the hardship will fall on the public — even if U.S. troops aren’t ever in harm’s way. It’s a paradox, but most Americans will feel more of a personal impact from Russia’s invasion of Ukraine than they did during two decades of U.S. wars elsewhere.

People are already supporting Ukraine’s war effort, whether they want to or not, by paying higher fuel prices. Gas has reached record highs, and the United States has just banned Russian oil imports on top of that. It’s not clear when prices will go down, especially as the world deliberately ratchets up pressure on Russian President Vladimir Putin. The economic war on Russia will reverberate throughout the West in other ways, too: Russia (and Ukraine) are major exporters of grains and metals, even though Russia is a relatively small player in global trade overall. Shipping costs will go up even more than they already had because of the pandemic. Inflation, already at levels unseen in decades, is likely to increase even more.

But those are all very different costs from the way citizens typically support a war effort that involves their own nation’s military: through service or through taxes to pay for the conflict. Neither was required of Americans during the wars in Afghanistan or Iraq. Less than 1% of the population serves in the armed forces. The Watson Institute at Brown University found that between 1.9 million and 3 million U.S. troops served in the Iraq and Afghanistan conflicts, many more than once. Since the United States has a population of over 300 million, only a fraction of a percentage of U.S. citizens faced battle.

Other than World War II, those two wars were the most expensive in U.S. history. But taxes during the wars did not reflect that burden; deficit spending did. President George W. Bush famously said after 9/11 that the American people should go shopping or take a trip to Disney World to support the country. As Sarah Kreps, the author of “Taxing Wars: The American Way of War Finance and the Decline of Democracy,” has noted, the recent trend in the United States where leaders try to shelter the public from the costs of war is not only ahistoric, but also dangerous.

Taxes tether the troops and the population to war so all feel some pain. U.S. founders believed the nation should sacrifice — not just service members, but also citizens — so they would hold leaders accountable. This is one reason it is the more overtly political House of Representatives, with its two-year election cycles, declares war and initiates taxes. That doesn’t mean soldiers and citizens bear the same burden, but the idea is that the price should be shared. This is critical in a democracy.

Previous conflicts have not all been paid for with tax dollars as the wars were waged, to be sure. But the mismatch is new. For the wealthiest U.S. citizens, marginal tax rates went up to 92% during the Korean War and 77% during Vietnam. For Bush’s terms in office, the richest paid about 8% less in taxes than before the wars began. With yellow ribbons going up around communities to show support of service personnel, taxes were coming down.

If regular citizens don’t feel the pain of war, they have little reason to press their elected representatives to end conflicts. According to a July 2017 congressional report, the wars in Afghanistan and Iraq combined cost each American taxpayer $7,740, which obviously came nowhere close to what the wars actually cost. Since little was asked of the public, the public asked very little of their elected officials regarding the wars that continued in their name year after year.

Americans are not an unpatriotic people. So why do our leaders keep making the choice to let our service members bear the brunt? Part of the change may be the severity of the threat. Since World War II, the United States has not faced an existential war that would rally the public to plant Victory Gardens — which were unnecessary for food but critical to making the population feel useful — let alone one that would lead voters to want taxes raised to pay for the fight. Though Korea and Vietnam were not existential conflicts, they still embodied the very real conflict with the Soviet Union — which did pose such a threat. Forcing service through the draft during Vietnam was needed for workforce issues, but it also caused the hardship to be shared beyond those who might normally have joined the military. There hasn’t been a draft since 1973.

The wars in Afghanistan and Iraq were not these sort of existential conflicts, either. They were limited both in their goals and in the means the United States would use to win them, and they were deliberately kept under the radar by leaders through such things as continuing resolutions or supplemental appropriations that obscured their true impact on the federal budget. This created even further distance between the choice to go to war and its ensuing burden: A population’s support for a war does not mean much if the true costs are being hidden.

But two weeks into Putin’s war in Ukraine, the price that American citizens will bear while the world confronts him is already on full display at gas pumps, a daily reminder that values often require sacrifice. Americans so far are rising to the challenge: Early in the war, polls found people were less likely to support sanctions on Russia if it meant higher energy prices here. By the second week of the conflict, support for sanctions had gone up — and 69% of Americans backed the economic measures even if it meant higher gas prices.

The way U.S. citizens are facing these hardships could mean previous leaders sold Americans short: Presenting the public with a clear challenge that requires costs but also strategic gains might have won support. This response may also be a sign that for the first time in many Americans’ lives, Putin has crossed the Rubicon of posing an existential threat — his aggression here calls for U.S. citizens’ sacrifice even if U.S. troops are not on the ground. (And since sending U.S. troops to Ukraine could easily escalate the war to the point where the costs would soon become unbearable for everyone, it’s best that they are not there.)

Maybe Americans are not willing to bear the cost for wars of choice, but we are for wars of necessity. The strategic scaffolding Bush erected to justify the war in Iraq crumbled over time, and gains in Afghanistan evaporated even faster with the recent withdrawal. Although no one obviously knows how the war in Ukraine will end, the implications could be as far reaching as the international order or — with Putin’s threat to use nuclear weapons already on the table -- the world itself.

Leaders should listen to ordinary citizens to learn what they think is worth fighting for. That’s a choice U.S. service members don’t get to make in a democracy led by civilians. Leaders should take this lesson for future wars in which they try to sideline the American people. Doing so not only puts the foreign policy aim at risk, but the entire republic.

Tammy S. Schultz is the director of national security at the Marine Corps War College, a senior fellow at the Atlantic Council and an adjunct professor at Georgetown’s security studies program. These views are her own. 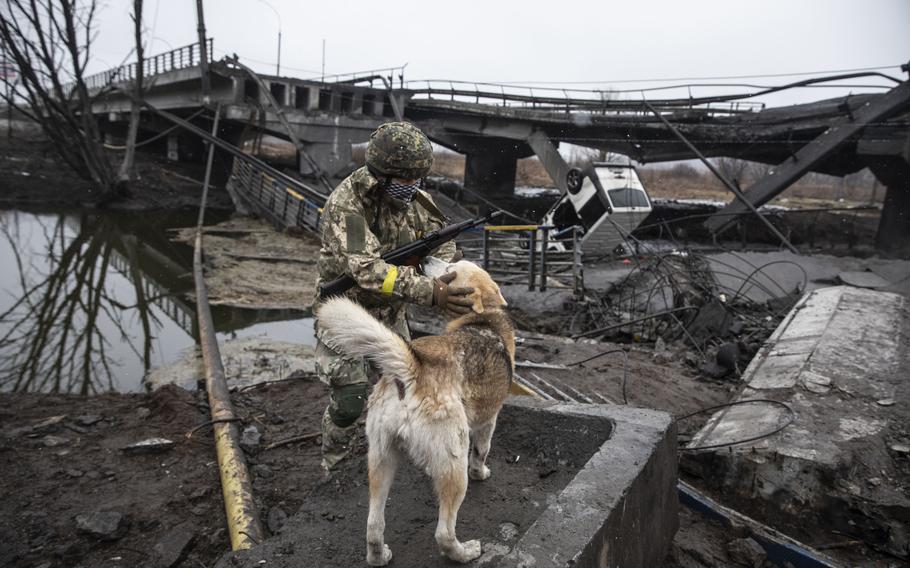 A Ukrainian soldier greets a dog by a destroyed bridge on the outskirts of Kyiv on March 3. (Heidi Levine/for The Washington Post)