Russia can defeat Ukraine, but it can’t hold the territory 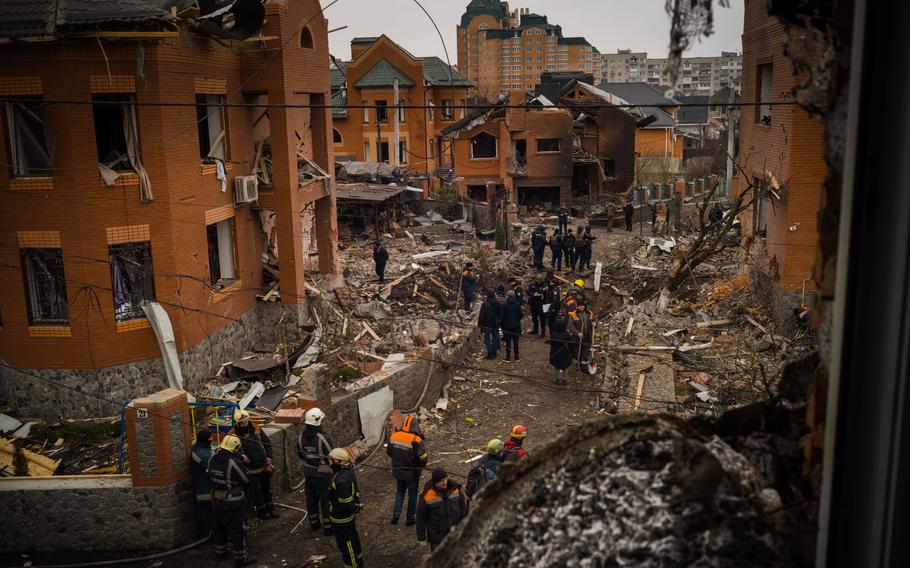 Damaged buildings in a residential area of Bila Tserkva on March 5, 2022. (Wojciech Grzedzinski/for the Washington Post)

Russia’s ambitious invasion of Ukraine has three fronts: a northern one targeting Kyiv, an eastern one focused on Kharkiv and its environs and a southern one attempting to overrun cities including Kherson, Odesa and Mariupol from Crimea and the Black Sea. The scorched-earth campaign includes the bombardment of civilian neighborhoods, and it seems unlikely that the Ukrainian military, however heroically it fights, will be able to prevent the occupation of some of its major cities.

But can Russian forces hold the territory that they seize? That’s far more in doubt. If past conflicts involving the occupations of hostile lands serve as a guide, the Russian army may not be able to, especially if Ukrainian citizens continue to rise up against their occupiers.

Russia has a combined 190,000 soldiers and irregular units inside and just outside Ukraine, a country of approximately 43 million people. (That figure accounts for a million people fleeing the conflict.) Those numbers translate into a force ratio of four soldiers per 1,000 inhabitants. Moscow could deploy additional ground units to Ukraine, but it has not moved to do so yet — and most of those soldiers have little battlefield experience.

There are no precise formulas for how many soldiers are needed to hold conquered territory, but scholars studying past conflicts have made some estimates. Some have suggested that a force ratio of as many as 20 soldiers per 1,000 inhabitants is necessary to pacify a hostile local population. One study that I co-authored concluded that the average force ratio to establish security after successful military operations is 13 soldiers per 1,000 inhabitants.

Estimates like these reflect the fact that large numbers of troops are essential to establish basic law and order for a sustained period following the end of major combat operations.

Lower numbers than these are generally insufficient to deal with hostile populations. In Iraq, the United States had seven soldiers per 1,000 inhabitants and faced a persistent deadly insurgency — even with the help of Iraqi government forces and Sunni militia members. U.S. Army Chief of Staff Gen. Eric Shinseki, who told Congress in February 2003 that “several hundred thousand” troops would be needed to secure postwar Iraq, was clearly familiar with the literature on this subject.

The United States had only one soldier per 1,000 inhabitants in Afghanistan and the help of local Afghan forces, but faced a prolonged insurgency that led to the overthrow of the Afghan government in 2021.

Ukraine may prove to be at least as forbidding a place for foreign soldiers as Iraq and Afghanistan. Ukrainian civilians have risen up against Russian invaders, with grandmothers stockpiling molotov cocktails and men forming militias. The Russia-Ukraine conflict is shaping up to be what Mao Zedong, the insurgent commander and Chinese leader, referred to as a “people’s war.”

Russian soldiers will increasingly be at risk of being picked apart by Ukrainian insurgents. But the low force ratio presents other risks, too. Ukraine’s western border — abutting Poland, Slovakia, Hungary and Romania — is wide open, meaning Russian forces are unable to interdict the growing flow of missile systems, volunteer fighters, artillery, small arms, ammunition and other materiel coming into the country from the United States and other Western countries. (Historically, great power support to insurgents significantly increases the odds of their prevailing, scholarly analysis has shown.)

The low force ratio, unremitting hostility of the Ukrainian people and possibility of sustained Western support to Ukrainian resistance efforts suggest that Moscow’s best option might be to cut its losses and withdraw its forces — at least to the borders of more-sympathetic Donetsk and Luhansk. Otherwise, Ukraine could prove to be Putin’s Afghanistan — a restive country that, in the end, proves impossible to subdue.

Seth G. Jones is senior vice president and director of the international security program at the Center for Strategic and International Studies. His most recent book is “Three Dangerous Men: Russia, China, Iran, and the Rise of Irregular Warfare.”