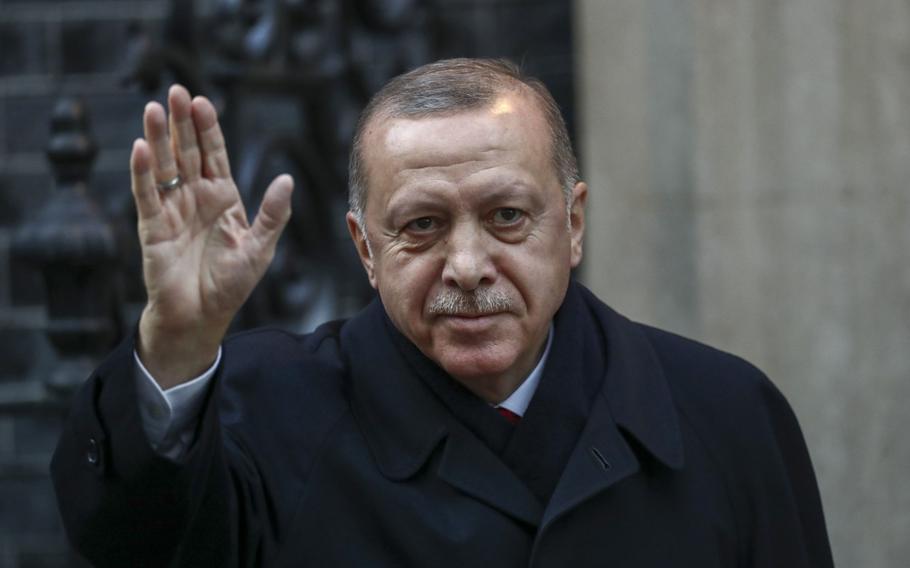 Recep Tayyip Erdogan, Turkey's president, gestures as he arrives for a multi-lateral meeting on the sidelines of the NATO summit in London, on Dec. 3, 2019. MUST CREDIT: Bloomberg photo by Simon Dawson. (Simon Dawson/Bloomberg)

In a phone conversation with Russian President Vladimir Putin on Wednesday, Turkey’s Recep Tayyip Erdogan said he would “not recognize any step against Ukraine’s sovereignty and territorial integrity” and counseled against further military action. He was, of course, referring to Putin’s decision to recognize the two self-proclaimed separatist republics of Donetsk and Luhansk, and send Russian troops into eastern Ukraine.

The Turkish president’s office said after the call that this reflects Erdogan’s “principled approach” to the crisis. It is consistent with Ankara’s longstanding position on Russia’s land grab in Ukraine: Turkey condemned the 2014 seizure of Crimea, a position Erdogan reiterated during a 2020 visit to Kyiv.

His consistency will be welcomed by his counterparts in the U.S. and Europe, who for several years have been anxious about Erdogan’s drift away from the West and toward Russia. A member of North Atlantic Treaty Organization, Turkey has outraged other members of the group by purchasing Russian missile-defense systems. In Syria, Ankara has made accommodations with Moscow and attacked Kurdish militias that the U.S. and Europe regard as important allies in the fight against the Islamic State. In speeches, Erdogan has routinely directed rhetorical vitriol at American and European leaders. And in return, they have frequently frozen him out of their deliberations.

But it would be a mistake to interpret his position on Ukraine as a signal that he wants to come in from the cold. Beyond wagging a disapproving finger at Putin’s territorial adventurism, Erdogan has shown little interest in imposing punishment on the Russian leader. Ankara has maintained that sanctions would get in the way of a negotiated solution.

This has as much to do with economics and politics, local and regional, as with principle. Russia is one of the top 10 destinations for Turkey’s exports and one of the top three sources of its imports. As much as Russian oil and gas, Turkey’s economy is heavily dependent on Russian visitors - the more so now as the tourism industry begins to recover from the Covid slowdown.

Turkey, which maintains strong trade ties with both Russia and Ukraine, would like nothing better than a speedy resolution of their differences: Erdogan has even volunteered his services as a peacemaker. A war that hinders trade with Ukraine would be bad enough, but sanctions that limit trade with Russia would be devastating to Turkey’s economy, which is struggling to recover from the combined effects of the pandemic, a plunging currency and Erdogan’s own unorthodox economic policies.

Erdogan knows from recent memory the pain Turkey feels when economic ties with Russia are hindered. The last time trade between the two countries was severely constrained was in 2015: Then, the restraints were imposed by Putin, in retaliation for Turkey’s shooting down a Russian military jet. The number of Russian visitors plummeted, and the Turkish leader was obliged to apologize.

Beyond the imperatives of economics, the two presidents pursue conflicting ambitions. Erdogan regards Turkey’s hinterland - and more broadly, the region covered by the old Ottoman empire and the Turkic ethnic group stretching from areas bordering the Black Sea through parts of the Caucasus and much of Central Asia - as being in his preserve and outside the purview of the West and Russia alike. This sometimes puts him at odds with Putin, who is fired by a similar vision of reasserting influence over the old Soviet Union and the empire of the czars.

The two men were most recently at cross purposes in the war between Azerbaijan and Armenia, where Ankara’s military assistance for the former, a Turkic-majority nation, proved decisive, upending the delicate balance Moscow had imposed on the former Soviet republics.

Erdogan also has upset Russia in Ukraine, by supplying the government of President Volodymyr Zelensky with military drones and the technology to make them. Earlier this month, Turkey defiantly proclaimed it wouldn’t let Russian anger prevent the deepening of military cooperation between Ankara and Kyiv.

Here, too, history is at play. Large parts of modern Ukraine were ruled from Istanbul until late in the 18th century, when a Russian invasion displaced much of the ethnic Crimean population. Turkey now has a sizable Crimean Tatar community, and feels responsible for those who remain in their traditional homeland.

Still, if Erdogan regards Putin as an interloper in his province, he also needs Russian support to pursue foreign-policy goals that conflict with those of the West. His assault on the Kurdish militia - which Ankara regards as a mortal threat because of its link to Kurdish insurgents in Turkey - wouldn’t be possible without the tacit support of Moscow, which maintains a large military footprint in Syria to prop up the dictatorship of Bashar al-Assad.

Russia is also a useful foil against the West. Erdogan uses overtures to Moscow as a bargaining ploy with NATO partners: Witness his periodic threats to buy Russian jets if the West denies Turkey the latest fighters.

For all those reasons, Erdogan’s druthers would be to limit his “principled approach” on Ukraine to that phone call. But if the man on the other end of the line has decided to send his forces further west, Turkey’s president may finally be forced to do what he has deftly avoided until now: Pick a side.