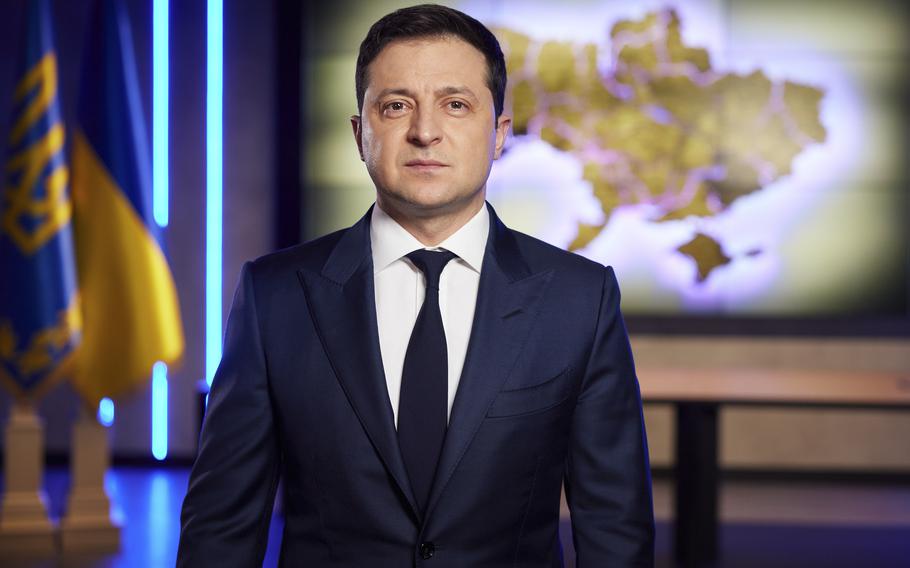 In his early morning speech, Putin spoke of “denazifying” Ukraine, a country led by a Jewish president (Ukrainian Presidential Press Office via AP)

I have written and said many times in recent weeks that I didn’t believe Vladimir Putin would launch a full invasion of Ukraine. I was horribly wrong.

Even in his speech announcing the invasion, Putin referred to his oft-stated belief that Russians and Ukrainians are one people. This, of course, was never true - even when they lived side by side in the Russian Empire and the Soviet Union. The two identities and cultures are distinct. But Russians and Ukrainians are the closest of kin. Even when we speak different languages, as we have increasingly done since Putin annexed Crimea in 2014, we understand each other. But Ukrainian President Volodymyr Zelenskiy made the most of his eloquent speech on the eve of the invasion by speaking in Russian, directly appealing to Russian citizens with the ease of someone who shares a cultural code with them. It runs thick as blood and has nothing to do with official Soviet avowals of brotherhood.

A lot of evidence pointed to Putin’s intention to invade. But I kept hoping he would stop at the last moment, because a full-scale attack on Ukraine, guaranteed to spill the blood of Ukrainian civilians, is the worst war crime a Russian can possibly commit. Even the inevitable parallels with Hitler’s 1938 Anschluss of Austria, which I drew before when Putin took Crimea and when he published his historical screed assailing Ukraine as an “anti-Russian project,” do not do justice to what happened in the early hours of Feb. 24.

Then the Lord said to Cain, “Where is your brother Abel?”

To make the curse permanent, God marked Cain to make sure no one would kill him to end his suffering. Russia, with the nuclear arsenal Putin keeps bragging about, also bears a kind of Cain’s mark now. It is not Putin who is cursed now - it’s all of us Russians. Our identity, wherever we are, will be tainted by this invasion, by our failure to stop the dictator long before he crossed this unspeakable line.

Russia, of course, has seen its share of fratricidal wars, the last of them in the early 20th century. But back then, the Red soldiers’ battle was a class revolt. Putin’s war is an imperialist attack on a people more closely related to Russians than any other on earth.

I have met Putin, and I have watched him as a journalist since before he became president. My analysis of his actions was always based on the assumption of his rationality. There was always something to gain, a manageable risk of losing. Perhaps I was wrong from the start. Perhaps Putin has changed in recent years as his close circle narrowed and negative selection expelled people with a broader vision from the ranks of his advisors. Quite likely, Ukraine has long constituted an exception from Putin’s rationality, as most of its people time and time again chose the Western path, away from Putin’s vision of the Russian World.

I left Russia after the Crimea annexation because I couldn’t accept it and felt it was a great historical wrong - both for Ukraine and for Russia. But I ended up returning to that assumption of rationality. I analyzed Putin’s moves from a cost and benefit perspective. I have a lot of rethinking to do.

The invasion is an irrational move. It makes any further negotiations with Putin and his clique pointless: There is, quite clearly, nothing he won’t do, no line he won’t cross, no matter what he says or what deal he makes. From this point on, autarky is the only feasible economic choice for Russia, and a retreat into isolation is the only remaining cultural and political choice. At the same time, Russia’s dependence on China, which has grown in recent years, is no longer a matter of choice. Any security benefits from turning Ukraine - and neighboring Belarus, from whose territory Putin also attacked - into a buffer state are illusory since Russia also borders actual NATO member states, which now will arm themselves as heavily as possible.

This attack achieves no conceivable gain. It is the worst possible move from a rational standpoint, a petty man’s revenge on a grand scale. It seals Putin’s place in history - not as a nation builder but instead as someone whose entire legacy will need to be erased for Russia to go back to a semblance of normality.

In his early morning speech, Putin spoke of “denazifying” Ukraine, a country led by a Jewish president. Yet it is Russia that now clearly requires denazification. It will not sustain Putin’s regime forever - and it, and we its citizens, will need to repent and make sure nothing like this calamity ever happens again.

This column does not necessarily reflect the opinion of the editorial board or Bloomberg LP and its owners. Leonid Bershidsky is a member of the Bloomberg News Automation team based in Berlin. He was previously Bloomberg Opinion’s Europe columnist. He recently authored a Russian translation of George Orwell’s “1984.”