How Reagan would have handled Putin 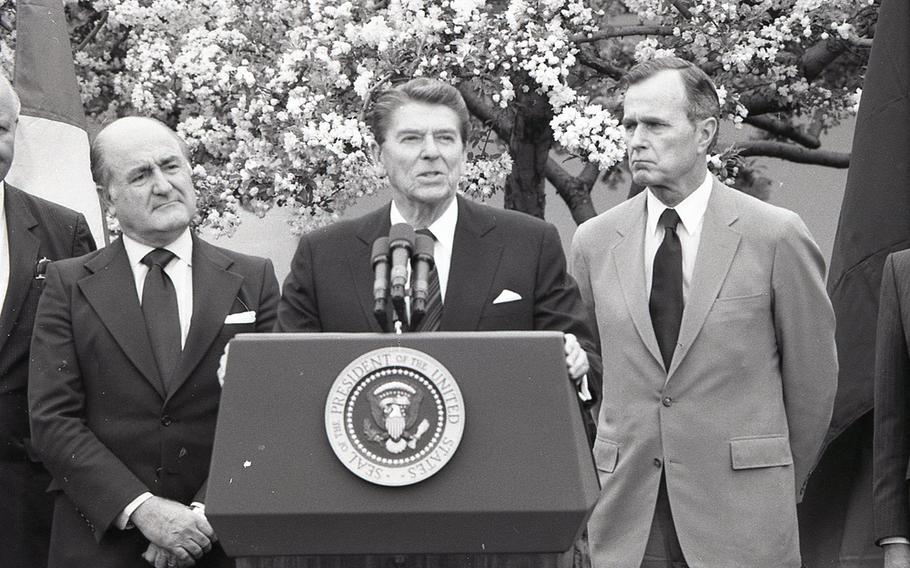 For Reagan, the No. 1 offender was the Soviet Union, but he held this view about communist governments more generally. He saw communism as an ideology that elevated the power of the state, a non-democratic state at that, over the rights of the individual. (USAID Historical Archive)

The Ukraine crisis makes me miss Ronald Reagan. More to the point, it makes me better appreciate his combination of moral clarity and realism: He understood that some governments are simply evil. Their leaders lust after power and seek to limit the freedom of their citizens. These governments are a threat to global security.

For Reagan, the No. 1 offender was the Soviet Union, but he held this view about communist governments more generally. He saw communism as an ideology that elevated the power of the state, a non-democratic state at that, over the rights of the individual.

It’s impossible to know exactly what Reagan would have thought of Vladimir Putin’s Russia, which is not a communist country. But everything Reagan said and wrote implies that he would have been highly suspicious of it. Putin’s Russia already has moved militarily in Georgia, Ukraine and Syria. It imprisons political opponents and clamps down on free speech. It is far from a legitimate democracy.

So I don’t think Reagan would have been surprised by the fact that Russia amassed at least 150,000 troops on the border with Ukraine, then attacked. He well understood the logic of what he called evil empires.

Unfortunately, Reagan has gone out of style, including with the conservative base. For 20 years, dissident Republicans have been saying that they want to move away from the legacy of Reaganism. Some of this intellectual migration has been more against Reagan’s market-oriented economics. But isolationism and even pro-Russian sympathies have become common in the Republican Party.

As I interpret the career of Reagan, he understood another point very well — and that concerns the scarcity of moral capital. Reagan knew there were real “bad guys,” and that it was up to leaders and elites to identify them and stand up to them, both rhetorically and diplomatically. Most of all, it was important to encourage the American public to internalize these same moral judgments. This may all sound corny and dated, but the conflict in Ukraine shows it to be an enduring truth.

The complementary Reagan vision was positive, optimistic and focused on what Americans can accomplish when working together. Americans are going to disagree on a lot of issues, he acknowledged, but they should maintain a relatively united front and save their real opprobrium for the truly destructive forces on the global scene.

Fast forward 40 years, and it seems that America has almost completely ignored these strictures. Many on the right seem most upset about the worst aspects of the left, and vice versa. Even when bad forces emerge in the international arena, Americans seem far more preoccupied by their fights with each other.

On Russia specifically, as recently as several months ago the current military escalation was hardly a topic of discussion among U.S. elites. When Mitt Romney tried to raise the danger of Russia in his 2012 presidential campaign, the point largely fell flat. Former President Barack Obama actually mocked him.

Now there is a rush to catch up. Much of the panic about Russia over the last few years has been inward-looking, related to its connection with the campaign of former President Donald Trump. Finally, there is a realization that European peace cannot be taken for granted — and a great deal is at stake.

So far President Joe Biden has done a commendable job building up a relatively united NATO and European coalition to oppose Russian moves against Ukraine. Like Reagan with the Soviet Union, Biden understands that it is necessary to keep open lines of communication and negotiation with Russia.

If an aggressive Russia were to remain central on the global stage, some people might find themselves reassessing more than just the Reagan presidency. War would require a reassessment of pretty much everything else, including the prospects for economic growth and international cooperation. There would also be the question of whether this cycle of combat and conquest has a meaningful stopping point.

Reagan understood all that. He made his share of mistakes, including on foreign policy, but the main issue he got right looms ever larger in importance. Even those who reject other aspects of his legacy should be able to appreciate this one.

Bloomberg Opinion columnist Tyler Cowen is a professor of economics at George Mason University and writes for the blog Marginal Revolution.