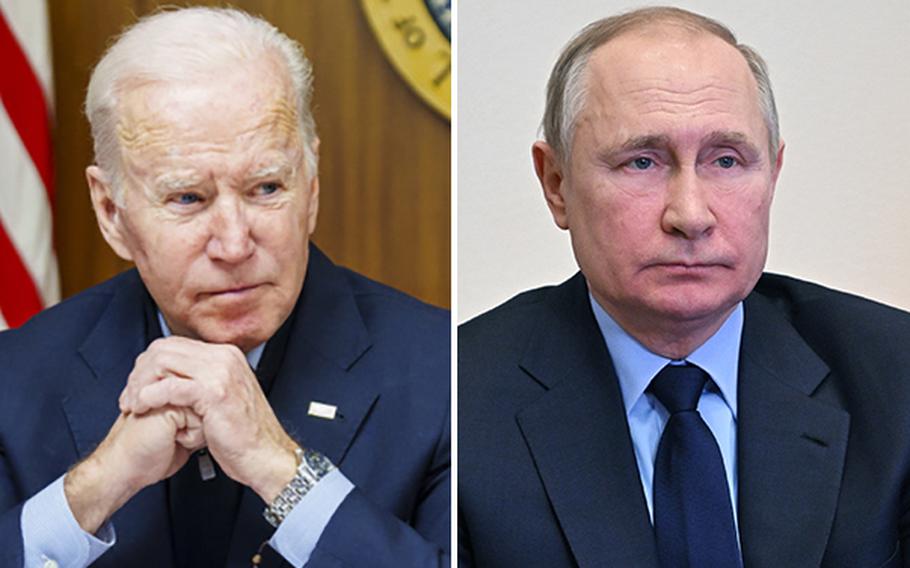 Biden’s showmanship has been subtler, if less spectacular, than his Russian opponent’s. And he has been rewarded in an important way: Putin hasn’t been able to force or trick him into giving any ground. (The White House via AP)

The Russian Defense Ministry’s announcement on Tuesday that troops were beginning to relocate to their permanent bases after drills on the Ukrainian border is not yet the denouement of the crisis that Russian President Vladimir Putin created and then U.S. President Joe Biden amplified with alarmist rhetoric in recent months. Still, the world’s attention has been focused on the possibility of a large-scale Russian attack on Ukraine long enough for an early tally of strategic and tactical gains and losses from the escalation.

So far, both Putin and Biden appear to have benefited from the crisis. European nations and especially Ukraine have, on balance, lost out.

Putin’s biggest win is that he has proven his ability - which he mentioned back in November - to dial Ukraine-related tension up and down at will. It didn’t take him long to position a large military force in close proximity to Ukraine. Even if part of it leaves now, as Putin and his underlings said on Tuesday, Russia’s military posture seems to be shifting more or less permanently toward the Ukrainian border; the troops that leave can always come back at short notice. There’s always the pretext of drills. In 2021, the Russian military spent only about 86% of its 1 trillion ruble ($13.2 billion) budget allocation. It’s funded lavishly enough to keep exercising in southwestern Russia and Belarus all year if needed.

Putin appears to have realized that concealing troop movements is pointless, and not doing so gives him the ability to escalate without sending a single soldier across the border and thereby giving the West a viable pretext for sanctions. Rob Lee at the Foreign Policy Research Institute, one of the most visible and competent military analysts during the crisis, has generally leaned toward predicting a new invasion - but, he recently wrote on Twitter, if an attack was in the plans, the Russian troops were perhaps too relaxed about being photographed.

Especially in recent weeks, this low-cost escalation has won Putin more attention from Western leaders than he’s seen since invading Crimea in 2014. Biden calls him on the phone at short notice; French President Emmanuel Macron, German Chancellor Olaf Scholz and a succession of British ministers rush to Moscow to talk him out of attacking. These encounters allow him to air his broader grievances and security demands. Even if his complaints don’t find much sympathy, they plant the idea in fellow leaders’ heads that Russia needs to be given something - it does have the right to be concerned about its security, after all.

As Margarita Simonyan, head of the RT propaganda network, wrote on her Telegram channel, “Nobody used to want to talk security with us, now there’s a line of visitors who wish to enjoy the sights of Moscow in February.”

Foreign leaders can’t afford to dismiss Putin’s monologues on history and Russia’s victimhood at the hands of NATO and the U.S. even if he abuses their time and distracts them from urgent domestic concerns. They can’t be seen ignoring the threat of a big war in Europe, so they’re on the hook. They also have to be careful about trying to punish Putin for escalations before they lead to bloodshed: If economic punishment is meted out in the absence of a war, why not start it, after all?

Yet another Putin gain has to do with the optics of Western nations’ behavior toward Ukraine during the crisis. The evacuation of diplomats, above all American ones, from Kyiv before a single shot was fired may have been a logical move after the deadly chaos of Kabul Airport, but it hardly provided Ukrainians - who have nowhere to evacuate - the moral support they deserved in the fraught situation. Canada and the U.K. even pulled out their military instructors - again, for perfectly valid reasons, but the message to Ukrainian troops was unmistakable: You’ll fight alone. Ukrainians won’t turn away from the West and toward Putin because of this, but the perception of hypocrisy will be hard to erase. By contrast, Poland, for example, has not evacuated diplomats despite panicky U.S. messaging, and that’s likely to be remembered, too.

It’s also to Putin’s advantage that, despite the failure of his efforts to get the U.S. and its European partners to pressure Ukraine into accepting the Minsk agreements of 2015 and thus a special status for the breakaway pro-Russian regions in the east, Minsk is back on the table as a solution to the crisis. Russia’s tame parliament on Tuesday appealed to Putin to recognize the separatist statelets. That was the Kremlin using the legislature to outline the alternative to Minsk: What amounts to a Russian takeover of the Ukrainian regions, no further invasion needed. That option is still a potentially strong move Putin can make. It would be domestically popular while not inviting too much punishment, since eastern Ukraine is already under Russian control.

The Ukraine contest between the Kremlin and the White House has not been zero-sum, however. Russian propagandists will ridicule the Western media coverage citing unnamed officials and spies and mock the press conferences citing vague intelligence reports, but Biden has actually come out on top in the information war. There was never much of a reason to believe what spies - American, Russian or from any other country - tell the media, so it doesn’t matter if their trustworthiness suffers a further blow. The Biden administration, for its part, has masterfully used nebulous or even incorrect information from intelligence sources to create a sense of staying one move ahead of Putin. Because such a tactic makes sense, Biden’s inevitable claims of having defused the crisis by means of publicity rather than meaningful concessions will play well at home and in most Western countries.

Biden’s showmanship has been subtler, if less spectacular, than his Russian opponent’s. And he has been rewarded in an important way: Putin hasn’t been able to force or trick him into giving any ground. Biden, in a way, hasn’t even started negotiating, while Putin and his people have tasted rejection time and again from that “line of visitors” Simonyan wrote about. If this were a prizefight, Biden would be the light-footed boxer dancing around a more eager opponent who throws a lot of wild punches. That’s an image befitting Biden’s long experience in politics, which goes back much further than Putin’s.

European leaders, by contrast, have proved incapable of such nimble messaging. Putin subjected them to what has come to be known as “long table diplomacy” after the 18-foot table across which he stared at them. They failed to make any headway with him, listening docilely at joint press conferences as Putin made a necrophilia joke about Ukraine (“Put up with it, my beauty,” he quoted an obscene folk ditty when talking about the Minsk agreements) and accused Ukraine of conducting genocide against the Russian speakers of the separatist statelets. The “Normandy format” talks in Berlin, in which French and German officials attempted to mediate between Russian and Ukrainian envoys, failed after nine grueling hours. As for the U.K.’s attempts at diplomacy, they looked as glaringly irrelevant, sometimes even comical, as the country itself has been in European matters since quitting the European Union.

Ukraine itself has been the worst off, however. Panicky U.S. messaging has hurt it with investors; diplomats hurrying out and war reporters flying in is hardly what an economically shaky nation would welcome. The hryvnia is down about 8% since mid-November, when the crisis began, and the drop would be more precipitous if not for National Bank interventions. President Volodymyr Zelensky’s loud objections to the imminent invasion argument have gone unheeded, and he has little to show for a string of high-level visits to Kyiv. It cost Ukraine some effort to keep most foreign airlines - with the notable exception of KLM - flying to Kyiv.

All Ukraine has received in return is the promise of a $1 billion U.S. government loan guarantee and some weapons shipments from the U.S. and its European allies, which, as everyone - including Ukrainians themselves - understands, will not win a war with Russia. The boost Ukraine gets from the arms supplies is offset by the certainty - now confirmed by the evacuations - that NATO members will do all they can to avoid a direct clash with Russia.

Putin’s interests are served by turning Ukraine into a pawn in a great-power game. Western leaders may insist that this will not happen, and that Ukrainians’ choices will be respected, but the dynamics of the current crisis contradict them. Zelensky - and Ukrainians in general - have shown an incredible stoicism in the face of events they haven’t been able to influence. Their bravery notwithstanding, the big-nation brinkmanship means the worst can still happen, perhaps even accidentally.

All Zelensky can do is clench his teeth and try to minimize the risk of war-starting accidents. A compromise with Putin is politically unfeasible for him, so he needs to hold out and watch Biden spar with his Russian adversary. It’s an unenviable position to be in. The West owes Ukraine a better effort - in both diplomatic and financial terms - to make it tenable.

Leonid Bershidsky is a member of the Bloomberg News Automation team based in Berlin. He was previously Bloomberg Opinion’s Europe columnist. He recently authored a Russian translation of George Orwell’s “1984.”