Why Israel should stay out of the Ukraine conflict 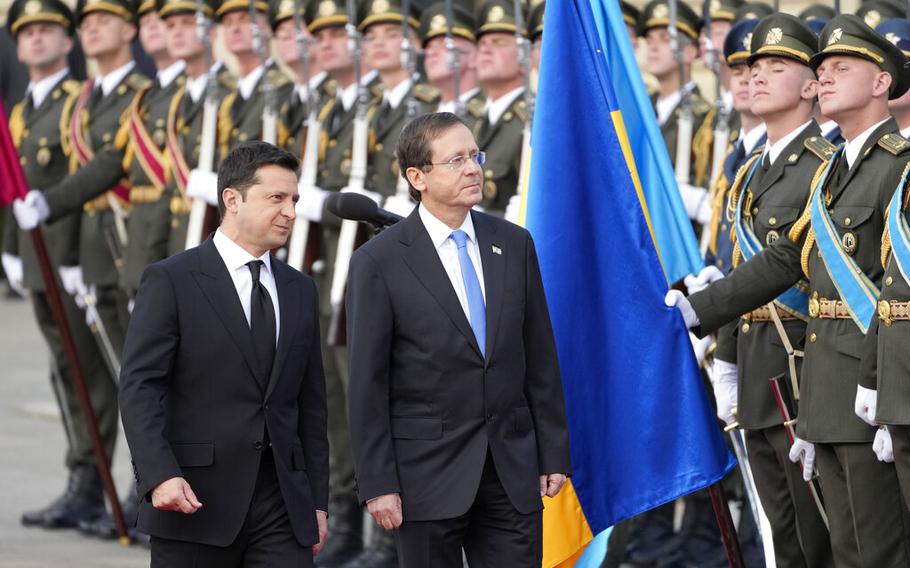 U.S. Secretary of State Antony Blinken called Israeli Foreign Minister Yair Lapid on Monday. According to the State Department’s readout of the conversation, they discussed “shared challenges, in the face of potential Russian aggression against Ukraine.”

It’s not clear what, if anything, Blinken is hoping for from Israel. But two days later, Israeli radio, quoting Ukrainian Foreign Minister Dmytro Kuleba, reported that Ukraine is seeking to buy Israeli cyber- and air-defense systems. That may be what Blinken had in mind, but taking a side in this conflict is very clearly not in Israel’s national interest.

Certainly, Israel should be rooting for the United States in this dispute. The U.S. is, after all, Israel’s indispensable ally. And the unprovoked invasion of a neighboring country and the potential mass loss of life is something no democracy could want to see.

But Israel is almost unique in that it has good relations with Moscow, Kyiv and Washington. It not a member of the European Union or NATO; it has no dog in this fight. From Israel’s viewpoint, the borders of Europe are matters for the big powers to decide.

And threatened by Iranian proxies who are armed with a vast arsenal of missiles, the government in Jerusalem can also understand why Russia is nervous about advanced NATO weapons stationed along its borders in Eastern Europe. No, NATO hasn’t declared the destruction of Russia its central mission, as Iran has; it has always been a defensive alliance. Still, there is respect in Israel for Russia’s viewpoint too.

Israel — which has annexed East Jerusalem and the Golan after winning them in battle — is hardly in a position to lecture or even share international umbrage at Russia’s threatened annexation of eastern Ukraine on the grounds that it is a historical part of the Russian homeland. Vladimir Putin has even held up Israel as a model for Ukrainians and Russians. He has publicly expressed his friendship with the million-strong community of Russian emigres in Israel.

An escalation of the conflict could be dangerous for Israel, too. As the Kenyan ambassador put it in this week’s United Nations Security Council session, when the elephants fight the grass gets trampled.

Kyiv is 1,864 miles from Jerusalem. Washington is even farther. But Russia is effectively right next door — in Syria, where Putin is the real decider and his goodwill is critical to Israeli security.

For more than a decade, Israel has been fighting a clandestine intelligence and air campaign against Iranian efforts to supply Hezbollah in Lebanon with advanced rockets and missiles for use against Israel. This campaign has been, and still is, waged mostly in Syrian skies against Syrian weapons depots.

Putin could have shut down Israeli operations when his troops entered Syria in 2015. Instead, he has allowed the Israeli air force to operate with something like freedom, asking only that Israel “de-conflict” (i.e., coordinate) with Russian military headquarters in Syria.

This is a break with traditional Kremlin policy, and it has won Putin friends here. So have gestures that demonstrate personal warmth toward the state of Israel. In 2020, Putin came to Jerusalem to commemorate the 75th anniversary of the Russian liberation of Auschwitz. He has referred to Israel’s million ex-Russian immigrants as “brothers and sisters.”

But Putin is not in Syria for sentimental reasons, nor is he there to rehabilitate that country after its civil war. He has come to establish a beachhead in the Middle East and the Mediterranean — a dream of Russian foreign policy since the time of the czars. The naval bases he has built on the Syrian coast are a warrant that he intends to stay in the region. It’s useful to have Israel as a neutral party, if not quite a friend.

Russia’s strategy and its positioning in the region are something that Israel needs to take into account, especially at a time when the U.S. is turning its own strategic focus to the Pacific. The U.S. will not likely abandon the Middle East or surrender its role as Israel’s chief defender. But Russia is now a permanent resident in the neighborhood. Staying out of its quarrels with Europe and the U.S. is simply common sense.

Zev Chafets is a journalist and author of 14 books. He was a senior aide to Israeli Prime Minister Menachem Begin and the founding managing editor of the Jerusalem Report Magazine. This column does not necessarily reflect the opinion of the editorial board or Bloomberg LP and its owners.