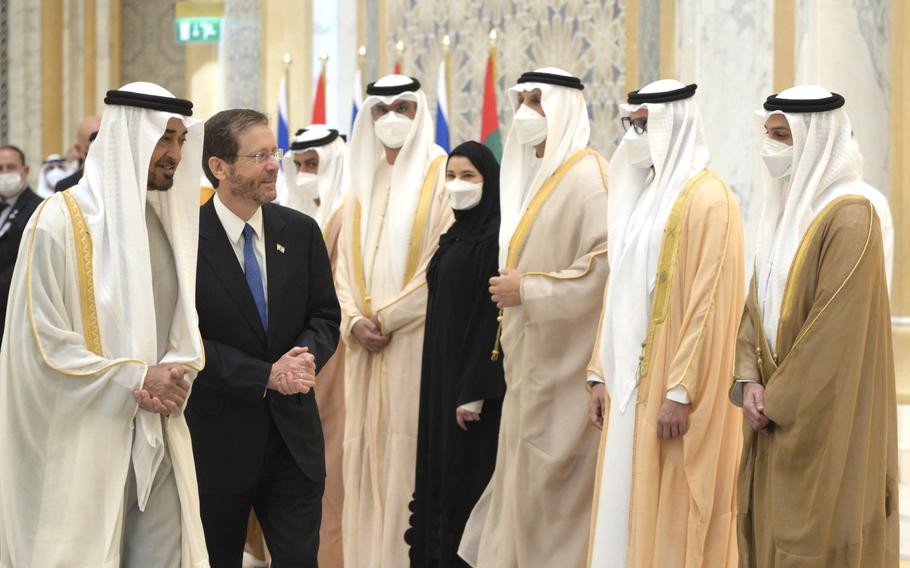 President Isaac Herzog, walks with the Crown Prince of Abu Dhabi, Sheikh Mohammed bin Zayed Al Nahyan, left, as he arrives at the royal palace, in Abu Dhabi, United Arab Emirates, Sunday, Jan. 30, 2022. Israel's president arrived in the United Arab Emirates on Sunday in the first official visit by the country's head of state, the latest sign of deepening ties between the two nations as tensions rise in the region. (Amos Ben Gershom/GPO/AP)

When the United Arab Emirates withdrew most of its forces from Yemen in the fall of 2019, its leaders might have been forgiven a degree of self-satisfaction. Of the four Arab nations that intervened in the Yemeni civil war — the others are Saudi Arabia, Bahrain and Egypt — only the UAE salvaged some semblance of military pride after four years of fighting.

While the coalition failed to defeat the Iranian-backed Houthi militia that had overthrown the Yemeni government and overrun Sana’a, the capital, the Emiratis prevented the rebels from capturing the south, including the crucial port of Aden.

But any sense of achievement the Emiratis felt was shaken last month when the Houthis launched a series of missile and drone attacks on Abu Dhabi, home of the UAE’s de facto ruler, Crown Prince Mohammed bin Zayed. The first strike, on Jan. 17, set off fires at the airport and in a nearby industrial area, killing three people. Although two subsequent attacks were intercepted by Emirati and American missile-defense systems, the message from Yemen got through, loud and clear: The UAE is firmly in the Houthis’ sights.

The message resonates far beyond the range of the drones and missiles. The UAE is a vital node of the global economy: It is OPEC’s third-largest oil producer and one of the world’s biggest trade hubs. Having repeatedly demonstrated the ability to strike deep within Saudi Arabia, where attacks occur almost daily, the Houthis — and their masters in Tehran — are now showing that their radius of menace isn’t limited to states with which they share a border.

Why now? One school of thought is that the rebels, having suffered recent battlefield reversals against the Yemeni government’s UAE-trained Giants Brigades, are signaling they want the Emiratis to rein in their proteges. Another is that the Iranians are seeking leverage in negotiations with the UAE: Prince Mohammed recently dispatched his brother and chief troubleshooter, Sheikh Tahnoon bin Zayed, to Tehran for talks about easing the long-standing hostility between the two countries. It would be very much in the Islamic Republic’s character to smack down an Arab nation it regards as having become too big for its britches.

The timing of the third attack, which coincided with Israeli President Isaac Herzog’s historic visit to the UAE — the first since the two countries normalized relations under the Abraham Accords — suggests the message was co-authored: The Iranian regime and the Houthis are united in their virulent antisemitism and loathing for Israel.

Although the Emirati leadership is trying not to show panic at the real threat, anxiety is palpable in their overreaction to imagined ones. Residents who posted footage of the missiles being intercepted were hauled in for questioning by the authorities on the grounds their videos might set off rumors or give away vital security information.

But it isn’t the grainy footage captured on cellphones that’s causing concern, nor can the government prevent alarm from spreading beyond its borders. The United States, for instance, is citing the Houthi attacks (as well as rising COVID-19 infections) in its advisory against travel to the UAE.

The Biden administration has also offered the Emiratis assurances of support and has said it will hold the Houthis accountable for the attacks. Israel, likewise, is offering security and intelligence support. The UAE will appreciate more U.S. Patriot anti-missile batteries; it may be leery of openly accepting Israeli hardware, however, for fear of drawing even more Iranian and Houthi hostility.

But the Emiratis will be grateful, as much as anything else, for American and Israeli tourists. After all, tourism accounts for more than 12% of the UAE’s gross domestic product and will be especially important this year as its economy shakes off the lingering effects of the coronavirus pandemic. Before the missiles darkened their January skies, Emiratis were counting on the spike in arrivals late last year tied to Dubai’s Expo 2020 to be sustained through 2022.

But the Houthis may have ended Emirati hopes of a return to business as usual.

Bobby Ghosh is a Bloomberg Opinion columnist. He writes on foreign affairs, with a special focus on the Middle East and Africa. This column does not necessarily reflect the opinion of the editorial board or Bloomberg LP and its owners.