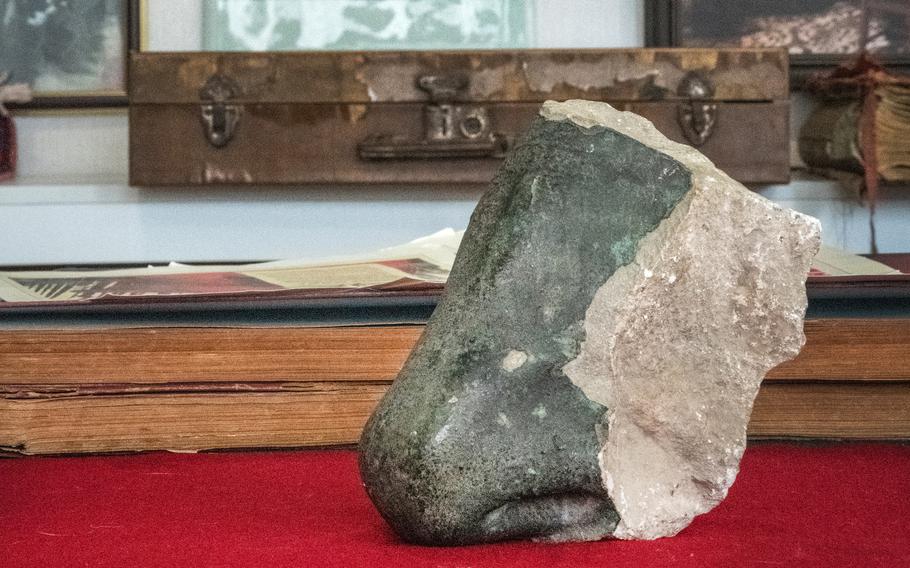 Stalin’s nose, a fragment of a Soviet-era sculpture of Joseph Stalin destroyed in Tbilisi in 1961 and recovered by Stalin memorabilia collector Grigori Oniani in 1994, at his house and museum in Tbilisi, Georgia. (Justyna Mielnikiewicz/Washington Post)

Russian President Vladimir Putin’s decision to mass nearly 100,000 Russian troops on the Ukrainian border has raised tensions in Europe to levels not seen since early in the Cold War. To forestall this attack, the G-7 nations have issued a stern warning that “Russia should be in no doubt that further military aggression against Ukraine would have massive consequences and severe cost in response.”

The allies have threatened a “punishing set of financial, technological, and military sanctions” that would come into effect immediately after a Russian invasion. Additionally, Senate Democrats have introduced the “Defending Ukrainian Sovereignty Act,” which would impose “crippling sanctions on the Russian banking sector and senior military and government officials.” Putin has responded to these threats by mobilizing additional Russian army units in the Crimea as well as in Belarus, which has alarmed NATO members bordering that country.

Putin’s objectives remain unclear. Is his troop deployment a way to pressure NATO into negotiating a new security arrangement for Europe, or even withdrawing NATO forces from Eastern Europe? Or does he believe he can present the West with a fait accompli by invading and installing a regime in Kyiv favorable to the Kremlin before the West can respond?

We do know one thing, however: An outright invasion promises huge consequences, a lesson Soviet leader Joseph Stalin learned in 1950 when he approved Kim Il Sun’s plan to invade South Korea. Kim had assured Stalin that the North Korean army would quickly capture Seoul and unite the country in only a few weeks, well before the United States could mount a response. Instead President Harry S. Truman immediately ordered units from the Eighth Army stationed in Japan to the Korean Peninsula as well as a massive bombing campaign to slow the North Korean advance. The invasion galvanized the West and transformed U.S. national security strategy, resulting in a massive mobilization, a decades-long nuclear arms race and a permanent militarization of the Cold War conflict.

Though the Cold War had begun several years before the North Korean invasion, American strategic planners considered military force a deterrent and saw the true field of battle as taking place in the realm of political and economic warfare. This was true even of NATO. When it was created in 1949, American policymakers believed that a public U.S. commitment to defend Europe would alone be sufficient to prevent a Soviet attack. The United States possessed a monopoly on the atomic bomb, and even more important, a vast economy that had repeatedly demonstrated its ability to outproduce its wartime rivals. As George Kennan argued in 1948, “the events of the past two wars have demonstrated that unless a European aggressor can be sure of dealing a decisive blow to the North American military-industrial potential in the initial phase of his effort to dominate the European continent, he can never be sure of final victory.”

U.S. planners concluded that the Soviet Union would not launch a war but instead would continue to subvert Europe through its massive political warfare campaigns that had already led to the collapse of democracy in Czechoslovakia in February 1948 and was wreaking political and economic havoc in France and Italy. When the United States Senate debated the NATO treaty, Secretary of State Dean Acheson assured concerned senators that no American combat forces would be permanently stationed on the European continent, and none were deployed after the treaty’s approval. Instead the United States would limit its role to aiding Europe in rebuilding its own military capabilities.

The Harry Truman administration applied this strategic model to Korea, believing that Stalin would not sanction an invasion but would support North Korea’s growing efforts to spark an insurgency to overthrow the South Korean government led by Syngman Rhee. According to historian Bruce Cumings, the South Korean government suffered a lack of legitimacy because of its inclusion of those who had collaborated with the Japanese during Korea’s years under occupation. This was in stark contrast to North Korea’s Kim, who was a recognized leader of the resistance to Japan. By summer 1950, the South was consumed by a nationwide insurgency. Even then, however, American intelligence doubted that Stalin would approve a military attack until it was clear that the insurgency would fail.

Instead the communists used the insurgency as part of their invasion strategy. Why? Because Stalin and Kim already had ample reasons to doubt that the United States would intervene if they did. In a speech before the National Press Club on Jan. 12, 1950, Acheson outlined America’s defense perimeter, which included Japan and the Ryukyus’ islands but not Korea. Seeing this as a green light, Kim planned a three-day military operation to capture Seoul, which he envisioned would result in the collapse of the Rhee government and the unification of the country within weeks. Stalin approved the plan in April and supported Kim with substantial military assistance.

On June 25, 1950, 200,000 North Korean troops armed and trained by the Soviet Union poured across the 38th parallel, a demarcation line created by the United States and the Soviet Union after Japan’s defeat in World War II. The invasion shocked many in the West who had expected the Kremlin would seek to unify the peninsula through a communist-inspired insurgency. Only days before the invasion, the CIA issued an intelligence estimate warning that the North’s primary objective was to extend its control over “southern Korea” by continuing and increasing “its support of the present program of propaganda, infiltration, sabotage, subversion, and guerrilla operations.”

Stalin and Kim badly misjudged U.S. resolve as well as the Truman administration’s desire to demonstrate to its new European allies its will to fight against Soviet or Soviet-inspired military aggression. Instead of a three-day march on Seoul, the invasion sparked a three-year war that devastated the Korean Peninsula, resulting in millions of casualties, including 150,000 Americans. The United States eventually deployed more than 350,000 troops and launched a relentless bombing campaign against the advancing North Korean - and later Chinese - armies, including the use of “firebombs” that would incinerate much of the peninsula. The Truman administration also exploited the Soviet boycott of the United Nations (to protest the refusal of the Security Council to seat a representative from the new communist government in China) to gain council approval for its military intervention.

The war led to a manifold increase in defense spending as the U.S. defense budget surpassed 15 percent of GDP, and the deployment of hundreds of thousands of American troops to Europe as the core of a powerful NATO army backed by a rapidly increasing nuclear stockpile, crystallizing a global military confrontation that would last for the next four decades. Many consider the costs of this arms race a key factor in the Soviet Union’s eventual demise in the 1980s, while in his epic work “The Rise and Fall of the Great Powers,” historian Paul Kennedy had warned that a continued arms race would undermine America’s leading position in the world.

The Biden administration has reiterated that the United States will not deploy forces to defend Ukraine, but is “contemplating” sending U.S. forces to reassure the Baltic nations regarding America’s commitment to their defense.

This underscores the lesson of the Korean War, that attempting a “fait accompli” is a risky operation and that a similarly large-scale invasion of Ukraine by Russia could instead create a dramatic strategic backlash, leading NATO to expand its military capabilities and firm up its defense commitments to exposed NATO allies in Eastern Europe, plunging Europe into a cold-war style arms race. Just as the Korean War led to the permanent positioning of U.S. military forces in Europe and a multi-decade nuclear arms race, Putin’s gambit could undermine Russian security, leaving it an economic pariah with a remilitarized NATO on its borders, the exact circumstances Putin hopes to avoid with his power play against Ukraine.

Gregory Mitrovich is the author of the award-winning book “Undermining the Kremlin: American Strategy to Subvert the Soviet Bloc, 1947-1956.” He is currently writing a book on the rise of the United States in the 19th and 20th centuries.