by
Kathleen Belew
• Special To The Washington Post • January 6, 2022 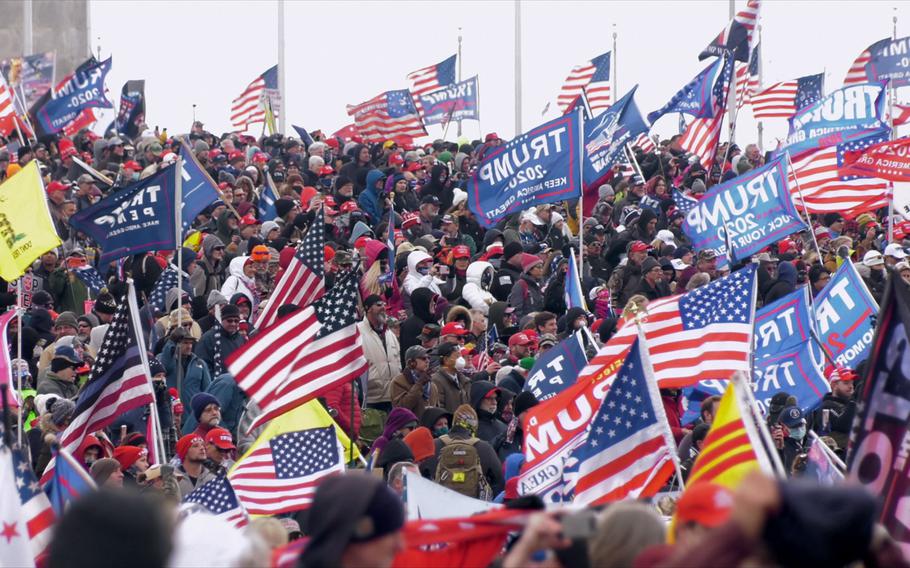 The invasion of the Capitol is best understood as the collision of three streams of right-wing activity: the Trump base (itself containing a range of extremism), the QAnon movement, and white power and militant right groups. This third segment - although probably smaller than the others involved that day - was highly organized, connected, outfitted with tactical gear and weapons and well-trained. These activists often led the charge, and they were the first to breach the Capitol. Their own ideology, which descends from decades of violent white-power organizing, reveals them to be dangerous, intent on the destruction of democracy and the propagation of race war. ()

As we mark the anniversary of the Jan. 6 assault on the Capitol, and as different judicial processes attempt to deliver their various forms of accountability, we still lack an adequate understanding of one of the day’s imminent dangers: the threat of militias to American democracy.

The invasion of the Capitol is best understood as the collision of three streams of right-wing activity: the Trump base (itself containing a range of extremism), the QAnon movement, and white power and militant right groups. This third segment - although probably smaller than the others involved that day - was highly organized, connected, outfitted with tactical gear and weapons and well-trained. These activists often led the charge, and they were the first to breach the Capitol. Their own ideology, which descends from decades of violent white-power organizing, reveals them to be dangerous, intent on the destruction of democracy and the propagation of race war.

One question that stands out: Why did these activists who attended the Jan. 6 action mostly not wear Nazi and Klan gear or carry symbols of organized white power? Why, instead, did they show up in yellow and black, in paramilitary gear, and carrying militia flags?

I have spent 16 years researching the history of white-power and militia activity. One consistent attribute of the militant right is that it is fundamentally opportunistic: White power and militia groups tack not only to the prevailing winds that point toward likely scapegoats, but also toward cultural acceptability. Even before Jan. 6, these groups received information (in the form of condemnation from politicians and other sources) that outright racist mobilizations would not curry favor with a broad group of supporters. Although the groups donned white polo shirts and khakis in Charlottesville for the Unite the Right rally in 2017, most politicians condemned their openly racist and antisemitic message. This point was surely driven home later by the federal jury verdict in Sines v. Kessler, which in November found the organizers of the Unite the Right rally liable for $25 million in damages.

But militias, as the scholar Joe Lowndes has documented, have not received similar condemnation. Even before Jan. 6, militia groups appeared regularly in semi-legitimate and legitimate settings, at anti-mask actions and even at Black Lives Matter protests.

And on the day of the electoral vote count, even groups that espouse white power ideology cloaked their most offensive symbols.

This shows us, once again, that Jan. 6 was meant as a recruitment and radicalization action - an attempt to raise awareness about the militant right and bring people into the fold. For this reason, the pressing work ahead will be clarifying the threat that extralegal militias pose to people, governance and institutions.

To be sure, some militias are distinct from some forms of white power activism. But there is a large degree of overlap, and militias are not separate enough to earn the label of neutrality. The word “militia” holds a special place for many Americans because it calls back to our Constitution, to our early history and to the role of militias in the Revolutionary War. However, those militias were incorporated into National Guard units in the early 20th century. The militias on the scene now do not have a clear lineage to the well-regulated bodies enumerated in the Constitution. Furthermore, as the legal scholar Mary McCord has shown, all 50 states ban such groups in one way or another.

The militias we face today are, quite simply, extralegal, unregulated private armies.

These private armies often show up saying they are there to “keep order.” They have provided private security for politicians (like the 1st Amendment Praetorian members who have accompanied former Trump adviser Mike Flynn, and the Proud Boys with Roger Stone).

They have also done things like detain protesters at the behest of police in Portland, Ore.

They have provided security for a GOP event in Colorado Springs, Colo., and then showed up there and elsewhere to pack school board and town council meetings to pressure local communities about to ban racially inclusive curriculums and masking.

Not only does this range of activity show that militias remain active as a local and national political threat, but too often, these groups do real harm with real casualties. Consider the Unite the Right Rally in Charlottesville, Va.: Part of the reason police did not protect counterprotesters who were beaten and killed was because, according to then-Gov. Terry McAuliffe, they were far outgunned by militias.

Extralegal private armies prevented police from ensuring safety? That is neither law nor order.

Extralegal private armies intimidated local communities to defy public health guidance in schools? That is neither health nor safety.

And extralegal private armies attempting to stop us from teaching and learning our own history? That is a direct attack upon our knowledge of civics, sense of community and the very tools we will need to overcome the threat of Jan. 6. This is to say nothing of the larger canvas of police violence and white supremacy, the problem of veteran and active-duty military participation in militia and other militant right groups, and the clear and present danger these groups pose to democracy. A recent report from BuzzFeed News documented at least 28 elected officials with ties to the Oath Keepers.

Without an understanding of what a militia is, someone might believe joining such a group is an exercise related to patriotism, or heritage. Instead, it is downright terrifying: elected officials with ties to extralegal, unregulated private armies.

This is a threat to Americans, to our democracy and to our institutions. Part of the work of the courts, the January 6 commission and our public conversation about the day is to understand the degree of culpability in our halls of governance that allowed the riot. But part must also be to reckon with violent militia groups themselves, and with the continued presence of extralegal private armies across the nation.

Kathleen Belew is author of “Bring the War Home: The White Power Movement and Paramilitary America” and is assistant professor of history at the University of Chicago.