US communities that welcome Afghan refugees will be glad they did 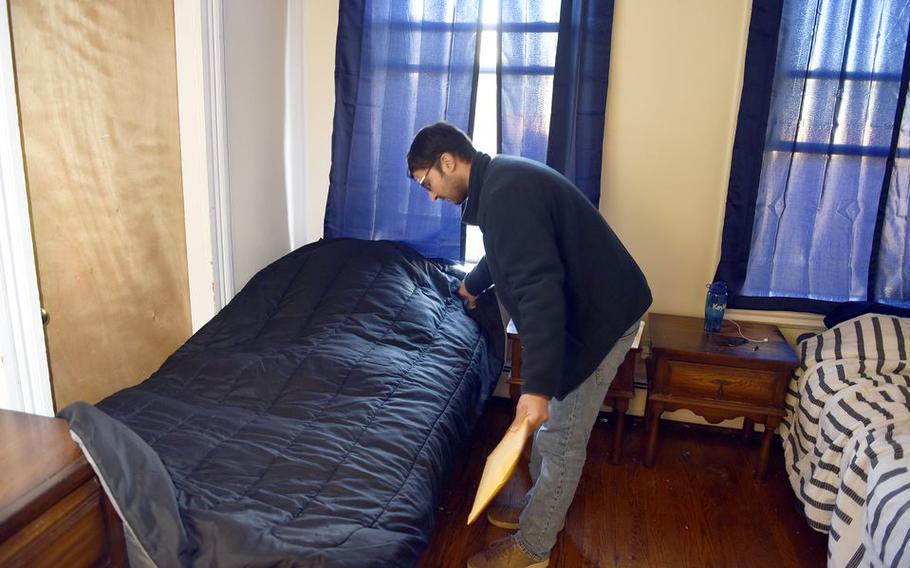 Muhammad Fahim Salimi throws a comforter over his bed in his Northampton, Mass., apartment. He is one of 68 Afghan evacuees resettled to the Pioneer Valley by Catholic Charities of the Roman Catholic Diocese of Springfield. (Don Treeger, The Republican/TNS)

REFUGEES-COMMENT 1341 words U.S. communities that welcome Afghan refugees will be glad they did Special To The Washington Post · Steve Tobocman, Alan Mallach · OPINION, OP-ED · Dec 28, 2021 - 9:54 AM In September, the Biden White House announced that the United States would welcome 95,000 people from Afghanistan over the next year. Not since the mass immigration of Cubans and Haitians to Miami over 40 years ago has the nation welcomed so many new arrivals in such a short period of time. Despite our country’s political polarization, most Americans have joined in welcoming these new residents. Elected officials across both sides of the political aisle and the governors of red and blue states alike have offered to help resettle Afghan families.

While federal policies dictate who enters the United States and the level of short-term resettlement support, cities and towns across our nation will help their new neighbors adjust and integrate, and the effects - both positive and negative - of immigration are typically felt at the local level. As these communities prepare to welcome Afghan refugees and asylum seekers as a measure of gratitude for their support of U.S. troops and concern about their future safety, people who already live here undoubtedly have concerns about what it will take to integrate these arrivals and how they’ll affect long-term residents and local economies as we recover from a global pandemic.

Our recent research on rapid immigration in two Detroit neighborhoods suggests that communities welcoming Afghan immigrants have much to look forward to, and that their arrival could particularly benefit other postindustrial cities faced with depopulation and job loss, as well as other struggling communities. Despite pockets of revitalization, Detroit is still struggling: September’s census figures confirmed that, for the fifth decade in a row, the city’s population had declined. While the city’s mayor, Mike Duggan, is contesting the count, the continued exodus is undeniable, as is its toll: poverty, abandoned homes and storefronts, and a shrinking tax base for too many Detroit neighborhoods.

The two neighborhoods we studied - Banglatown, straddling the border of Detroit and the city of Hamtramck, Mich., and Chadsey Condon, on the city’s southwest side - look very different from the rest of the area despite having the same income levels and decades of population loss that plague so much of Detroit. That’s because the number of immigrants - mostly from Bangladesh, Yemen, Mexico and Central and South America - in these two neighborhoods has grown by nearly 50% over the past 20 years, from around 12,000 to 17,500, while the citywide population plummeted more than 25% over the same period.

Population growth is just the beginning of the story. Tax foreclosures, evictions, crime and vacant houses - problems plaguing large swaths of Detroit - were all lower in these two neighborhoods and declining faster than elsewhere. While homeowners have been increasingly replaced by absentee investors across Detroit, homeownership increased in these two neighborhoods, despite immigrants’ modest incomes. More than 100 new businesses have opened along Conant Street in the heart of Banglatown: A strip plagued by vacancies a decade ago now bustles with activity and energy with spice shops, halal restaurants and butchers, Bangladeshi restaurants and clothing stores, doctors, dentists and cellphone outlets.

Our study found that residents of these neighborhoods - immigrant and nonimmigrant alike - were more satisfied with and more optimistic about their neighborhoods. They felt safer than people in the rest of the city. And these benefits occurred without the downsides of gentrification.

In Detroit, immigrants are no more affluent than their neighbors. As homeowners and renters, they are largely replacing residents who are leaving and filling up vacant properties, rather than displacing those who wished to stay. The storefronts they are moving into are often empty or underutilized. This experience should prove instructive for other postindustrial cities looking to stabilize neighborhoods without displacing the longtime residents and businesses that have remained through thick and thin.

Cities can learn from the promising practices new immigrants may bring. Our study found that real estate activity in Banglatown and Chadsey Condon was occurring outside the formal banking and mortgage financial systems, as immigrants leveraged their own financial resources and community capital networks to buy and fix up homes. Cities can boost homeownership and property improvement by building on these nontraditional methods of financing. They might help immigrants acquire vacant property from government and public land banks, as well as provide housing counseling services in immigrants’ native languages. Local governments must be careful, however, not to quash the organic ways immigrants will find to thrive in their new communities, with the creation of new, unnecessary bureaucratic hurdles.

The impacts of rapid immigration are most profound in communities with larger immigrant and refugee clusters than the 250 or 500 new Afghan arrivals that most communities will see. Still, the profound impacts observed in our research were centered in Banglatown, where the Bangladeshi community grew from 2,000 foreign-born residents to 6,000 over 18 years, suggesting that even small numbers of new arrivals can lead to benefits.

Historically, when refugee groups have been settled in small numbers in many different places, over the subsequent years, they tend to cluster in a smaller number of those places, creating larger ethnic nodes. We suspect the same thing will happen with Afghan refugees, which only further underscores the benefit to communities pursuing welcoming policies - they likely will attract additional Afghan families as secondary migrants.

These new Afghan neighbors will not likely squeeze U.S. workers out of jobs. In fact, the economist David Card, who was recently awarded the Nobel Prize for his work on real-world labor markets, found that the labor impacts from the Mariel boatlift - in which 150,000 Cubans and Haitians arrived in South Florida between May and September 1980 - suggest the opposite.

Card’s research found that this large influx of lower-skilled labor “had virtually no effect on the wage rates of less-skilled non-Cuban workers,” nor evidence of an increase in unemployment among less-skilled Black residents or other non-Cuban workers. The same was true for Cuban workers already in Miami. Simply put, immigration is not a zero-sum game between immigrants and the people who are already here.

Successful integration efforts must consider the social, as well as the economic, issues that will arise. While our focus groups, surveys and interviews found no open hostility between Detroit’s immigrants and their U.S.-born neighbors, we also found little interaction between the groups, and we turned up a degree of suspicion and misunderstanding between them.

Communities welcoming large numbers of Afghan arrivals should make intentional efforts to build social cohesion between immigrant and longtime community members, such as inviting new immigrants to block club meetings and other community planning efforts or using the arts as a way to build bridges between cultures. The challenges involved in connecting long-term residents and new immigrant communities are real, but also are surmountable, as were the tensions between immigrants and their neighbors going back to the 19th century.

Welcoming America and scores of official welcoming cities and counties across America have shown how to build bridges between immigrants and longtime residents and develop mutual trust and understanding. States and cities are creating offices of immigrant affairs, multi-sector nonprofit initiatives, small business support centers and workforce development entities that help immigrants navigate their new hometowns while recognizing the value immigrant inclusion brings to all members of their communities. This infrastructure, which already exists, can be tapped to assist communities with their new Afghan arrivals.

We can make welcoming Afghan arrivals part of our recovery from the health and economic crises of the past 18 months. The same benefits and opportunities we observed in Detroit are happening across the American heartland, including neighborhoods revitalized by Bosnians in St. Louis, Ahiska Turks in Dayton, Somalis in Minneapolis/St. Paul and Burmese in Buffalo. Immigration is good for cities and neighborhoods, and an immigrant welcoming strategy is good for America.

Steve Tobocman is the executive director of Global Detroit and a former Michigan state legislator from Detroit.

Alan Mallach is a senior fellow with the Center for Community Progress and author of “The Divided City: Poverty and Prosperity in Urban America.”