by
Brian Rosenwald
• Special To The Washington Post • December 23, 2021 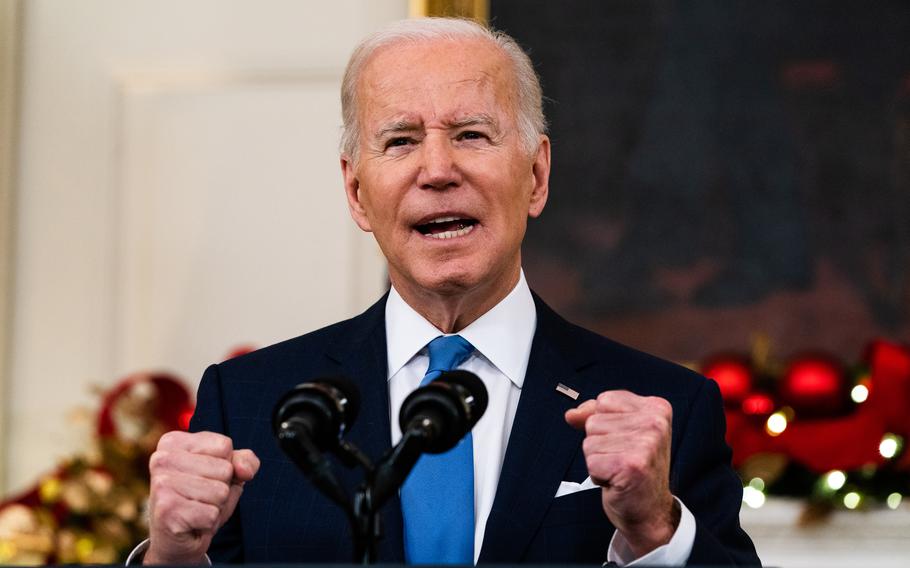 President Biden delivers remarks about the coronavirus at the White House on Tuesday. (Demetrius Freeman/Washington Post)

In the wake of the apparent disintegration of President Joe Biden’s Build Back Better bill (though it seems possible that a narrower version of the legislation may yet pass), many commentators, journalists and political operatives blamed Biden and congressional Democrats for overpromising with an agenda as ambitious and revolutionary as presidents such as Franklin D. Roosevelt and Lyndon B. Johnson.

They argue that with exceedingly narrow Democratic majorities in both chambers of Congress, Biden never had a shot to match these Democratic luminaries, but hubris led him to think otherwise. But this narrative misreads Biden’s agenda. He isn’t proposing radically new public policies. Rather, he is simply pushing to complete the legislative program of his predecessors.

Over the past 80 years, Democratic presidents have passed transformational pieces of legislation, establishing new public services and a federally provided social safety net, while aiming to rebalance the economic scale in American life - making it fairer for workers and consumers.

It began with Roosevelt, whose many achievements during the depths of the Great Depression set the standard for every Democratic president who followed. The Social Security Act contained both old-age pensions for seniors and Aid to Families With Dependent Children (AFDC), which aimed to help poor single mothers - two groups unlikely to benefit from the infrastructure jobs Roosevelt’s administration was also creating to lift people out of poverty. The Wagner Act revolutionized the balance of power between bosses and workers. In the words of historian William Leuchtenburg, it “threw the weight of the government” behind collective-bargaining rights and “compelled employers to accede peacefully to the unionization of their plants.”

Roosevelt’s building and public works programs, conservation initiatives and focus on rural electrification transformed America physically, including the construction of 124,000 new bridges and more than 40,000 new public buildings like schools and hospitals. And the 1944 G.I. Bill reshaped higher education, by promoting greater access for returning servicemen. Access to college educations, along with the bill’s mortgage assistance, also made a middle-class lifestyle possible for millions of returning GIs (though predominantly White ones). These initiatives and more had tentacles in every aspect of Americans’ lives and reshaped the relationship between government and citizen.

Even Republican President Dwight D. Eisenhower dared not try to roll back Roosevelt’s signature achievements, which had become part of the fabric of American life. If anything, he created his own massive New Deal-style program with the Federal Aid Highway Act in 1956.

Johnson’s Great Society programs often get mentioned in the same breath as Roosevelt’s New Deal for their dramatic scope. For the first time in a century, the United States took significant steps toward making the promises of equality and voting rights in the 14th and 15th Amendments a reality. Three landmark bills, the 1964 Civil Rights Act, 1965 Voting Rights Act and 1968 Civil Rights Act, promoted greater racial equality in everything from housing to public accommodations and combated gender discrimination as well.

Johnson’s Medicare and Medicaid programs offered government-provided health insurance to millions for the first time, achieving something that both Roosevelt and Truman wanted but did not achieve. The Elementary and Secondary Education Act and Head Start program dramatically enhanced the federal role in educating American children, especially poor ones, while the Hart-Celler Act reshaped U.S. immigration laws to remove bigoted national origin quotas set in the 1920s.

The budget conscious President Jimmy Carter, aware of the increasingly conservative political climate in the United States, and focused on addressing an energy crisis, did not broaden the social safety net. Yet he did score significant energy and environmental legislation that helped push the United States toward energy independence and conservation, tightened pollution control, invested in alternative energy sources, moved to clean up toxic waste and added more than 157 million acres of national parks, wildlife refuges and more in Alaska.

Pitching himself as a “New Democrat,” President Bill Clinton had serious ambition that mixed conservative ideas - welfare reform, an initial budget aiming to reduce the deficit and a crime bill that included tough punitive measures, federally funded prison construction and money to put more police officers on the street - with liberal ones: promoting national service, ensuring that all Americans had health care, new federal gun restrictions and more. Even the crime bill included substantial new social spending designed to prevent crime. While Clinton’s most ambitious agenda item, his universal health care proposal, flopped, he did sign the Family and Medical Leave Act and enacted a bipartisan program to provide health insurance for uninsured children.

President Barack Obama picked up where Clinton left off with the ever-elusive liberal quest for government guaranteed health care for all Americans. And finally, after a century of struggle, Obama succeeded where his predecessors had failed, capitalizing on continued American frustrations over the health insurance system and large Democratic congressional majorities. He also reshaped America’s student loan programs with legislation that allowed students to borrow directly from the government instead of incentivizing banks to dole out the loans, while capping annual loan payments for graduates at 10 percent of their income. When it came to climate change, he wanted - and the House delivered - a bill that created a cap-and-trade system with limits on greenhouse gas emissions and set a national standard for the production of renewable energy. Yet the proposal died in the Senate.

This history makes something clear about Biden’s agenda: He’s trying to build upon the big programs enacted or proposed by his Democratic predecessors. In the American Rescue Plan, Biden and congressional Democrats expanded the child tax credit in a quest to eradicate child poverty that dates back to Roosevelt’s AFDC. The ARP also expanded the subsidies under Obama’s Affordable Care Act to make health insurance more affordable for more Americans (Biden is pushing to extend both of these temporary programs). Additionally, Biden has proposed adding hearing, dental and vision coverage to Johnson’s Medicare program.

Biden’s push to enact universal pre-K and federally subsidized child care? They expand Johnson’s innovations in education and early-childhood education. In fact, Biden is just trying to complete a task that a bipartisan coalition in Congress almost pulled off in 1970. They passed legislation providing federally funded child care, but Republican President Richard M. Nixon vetoed it.

Paid family leave? This policy builds off Clinton’s Family and Medical Leave Act - this time ensuring not only that workers can take time off from work to care for children and family members but that they are paid during that leave.

Biden’s ambitious climate agenda aims to succeed where Obama failed and builds on Carter’s push to diversify the country’s energy sources and lessen its reliance on imported fossil fuels.

In short, Biden isn’t proposing a radical agenda as critics charge. Rather, he has pushed to extend the programs and vision of his predecessors, while filling holes, addressing flaws and adapting commitments to new problems and circumstances. Is Biden’s agenda liberal? Absolutely. Does it extend the role of the federal government in American life? Yes. But it’s hardly aiming to reimagine this role or take it into fundamentally new aspects of society.

Brian Rosenwald is one of the co-editors of The Washington Post’s Made by History, a fellow at the University of Pennsylvania and author of “Talk Radio’s America.”