In the Navy, I buried my emotions to protect myself and others; my dog, in his last days, helped me recover them 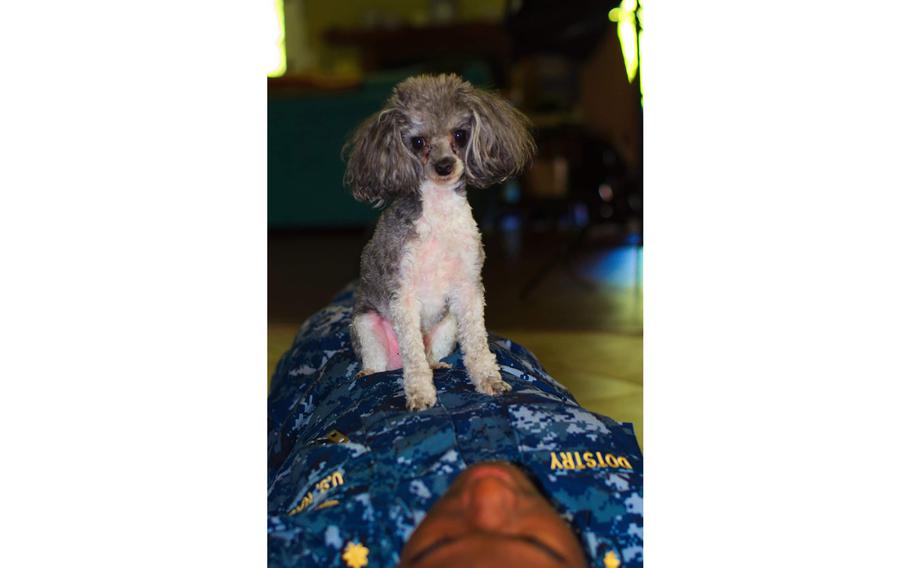 Dan had a habit of jumping on the author’s chest when he got the chance. (Thomas Dotstry/TNS)

(Tribune News Service) — Several years ago, I went through a training program called the Submarine Command Course before I could assume the responsibilities of executive officer of a nuclear submarine. It is an arduous course, meant to challenge each participant to make sure that they can withstand the pressures of the job. Being responsible for a submarine, the crew of more than 150 people, and the weapons on board is a big deal. The Navy goes through a lot of effort to minimize the risk that you’d fail.

The instructors, all previous submarine captains, pushed our buttons to determine our fitness. Much of the course focuses on technical knowledge, tactics and decision-making. However, they also had us take a battery of psychological and personality tests to expose any potential issues. Each of these assessments yielded a similar profile for me. The instructors and mental health professionals all said something to the effect of: “You do not emotionally respond to anything. This can keep people calm in tough situations. It could also lead people to believe that you are aloof, so be careful of that.”

I’d heard these things before. I’d all but built my personal reputation on it. Many of my professional evaluations I received in my time in the Navy pointed out the fact that my presence was a calming force, one of which is a letter from a senator, which hangs on my wall. I was proud that I could be counted on as a rock in a storm. My extreme stoicism was a byproduct of my rough upbringing and a series of overt decisions to not feel the emotion of any event while it was happening, thus reducing the emotion to a whisper in the background. This also extended to my personal life.

I’ve recently retired from the Navy. Most of the decisions that I’ve made in my adult life have been centered around the question “what type of person do I want to be?” Recently, asking myself that question revealed that I needed to be a stronger presence with those I loved. That was fundamentally at odds with what would be required of me had I continued in the Navy. As such, I made the decision to retire. There have been many adjustments. Finding my way back to feeling has been one of the most surprising.

Very recently, our dog passed away. He was a 5-pound toy poodle named Dan Schultz. He joined our family as a puppy, when I was on my first ship, and he’d been with us for 13 years. A tumor developed in his stomach that was inoperable due to its size and a preexisting heart condition. The mass deprived him of his appetite, and he could not eat. It was putting pressure on his other organs, restricting their normal function. Under the advice of his veterinarian, we made the decision not to prolong his end of life.

Watching him live his final day, knowing each event would be his last time doing it, was heart wrenching. He had very little energy, due to how little food he’d been able to hold down. He still came over to my wife and tried to calm her, as he could hear the sadness in her voice. I remember the realization of which of those trips up the couch would be his last. When the doctor arrived, Dan stood up, struggling to maintain his balance and walked over to greet him. This would be the last stranger he would greet with his customary kindness. That greeting remained on repeat in my mind for days, as have many of our last moments together.

I have genuinely never hurt the way that I do thinking about my little friend. I’m devastated.

Here’s the thing. I’ve largely been desensitized to death. I grew up in a neighborhood where it was more common than it should be to lose people around you. Before I ever joined the military, I’d learned to compartmentalize the emotion of loss in a way that I’d be ashamed to fully describe. Once I joined the Navy, I had the cover of “the next milestone” to help me move past emotional events with ease. I’ve spent most of my life choosing which events to feel, further enabled by the perceived expectation that I remain levelheaded in my profession. I’d lost family members and friends, but while I served, those things could be filed away until I had time to deal with them.

When we were deployed, bad news was tightly controlled. Any notification of tragedy was filtered through the Command Team, who would decide when to notify the member. Sailors could indicate whether they preferred delayed notification, which the command would sometimes ignore if the tragedy was severe enough. I always requested not to know anything until after the mission was over. I’d turned off my feelings to support the needs of the Navy. I wanted to be the type of person who did not make situations worse with my own emotion. I wanted to be the type of person who could carry the burden of other people’s emotion, forsaking the weight of my own.

As I retired, I decided that I wanted to be the type of person that was allowed to feel things in the moment. I’m choosing to sometimes prioritize the emotion of today over tasks of tomorrow. I’m choosing to prioritize my own joy and sadness over that of others. This has a learning curve. Evidently, the curve is steep.

I think of the last time my wife took Dan for a walk outside. She carried him because he was too weak to walk by himself. He saw one of his dog friends, Waldo. Waldo would typically be playful, but this day, he seemed to be aware that Dan was not up to it.

I recall the last time I heard Dan’s footsteps when I used our air-popper to make popcorn. He got excited and came to get a piece. However, he was unable to eat it due to the mass we’d just learned was killing his appetite. He sat it on the bed next to him and looked at it longingly.

I remember Dan walking over to his bed for the last time. He laid down between me and my wife, as we sat on the floor next to him. He looked up at us briefly and then laid his head down to grasp what little comfort he could.

No matter what I’m thinking or saying, thoughts of Dan Schultz weave their way in. When confronted with these memories, I find myself fighting a wave of sadness. I assume it is sadness, as I don’t have much practice at feeling it. As I sit with the feeling, questions start to bounce around in my mind.

Is this what I should have felt when my aunt passed away?

Should it have been this, and more, when we lost Grandaddy?

Am I a bad person for just now feeling this?

What tragedies did I ignore, where I should have felt something?

When is it supposed to stop?

This is all bigger than Dan. While I’m sad, I appreciate that his companionship was strong enough that it has caused me to recognize that grief is not a weakness, but a way of reconciling my view of the future in the absence of love lost.

I have no desire to speak for all military veterans, as we are not a monolith. I’m not sure how many veterans can relate, but I’m hopeful that there is at least one. I merely wish to suggest that one of the things that uniformed personnel may sacrifice is the ability to be emotionally present for those around us. The sacrifice of being calm when reality demands otherwise is not trivial. The sacrifice of not being able to tell the stories that have shaped your stoicism, either because it is classified or may scare those you love, also takes a toll. When you thank someone for their service, the gratitude implicitly extends beyond the mortal dangers they may have faced; it includes the elements of their humanity they may leave behind to be effective.

Whether one is able, or desires, to reestablish their relationship with their emotions is a personal journey. It is a decision that comes with a cost to the individual. I don’t know why Dan has been my shepherd on this journey, but I’m thankful to my best friend for teaching me that I have more road to travel on my way back to feeling.

Thomas Dotstry is a retired submarine officer, who served with 20 years of cumulative enlisted and commissioned service.