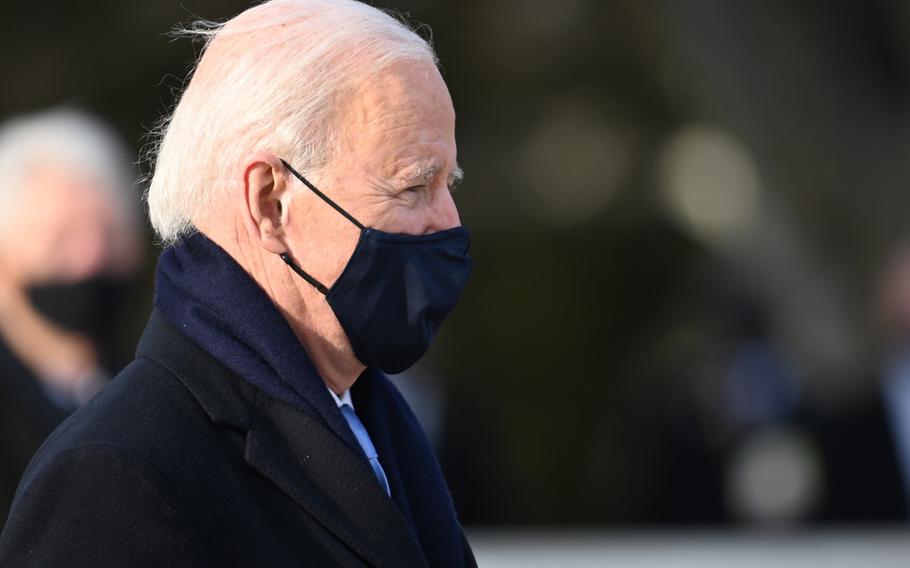 Those economic consequences would probably include excluding Russia from the Swift system for international electronic payments, and possibly a reimposition of U.S. sanctions on companies working on the construction of the Nordstream 2 pipeline between Russia and Germany. Biden has also threatened to increase weapons shipments to Ukraine and bolster the defenses of vulnerable NATO allies on Ukraine’s border. (Christian Conrad/DoD)

President Joe Biden’s administration has gone out of its way to signal toughness toward Russia’s military buildup on Ukraine’s border. Biden himself said on Wednesday that he told Russian President Vladimir Putin that if he ordered an invasion, the U.S. was prepared to unleash economic consequences on Russia “like none he’s ever seen or ever have been seen.”

Those economic consequences would probably include excluding Russia from the Swift system for international electronic payments, and possibly a reimposition of U.S. sanctions on companies working on the construction of the Nordstream 2 pipeline between Russia and Germany. Biden has also threatened to increase weapons shipments to Ukraine and bolster the defenses of vulnerable NATO allies on Ukraine’s border.

It remains to be seen whether any of this will dissuade Putin from invading Ukraine. But even if it does, Putin’s troop buildup has already earned him some initial concessions: Along with his warnings, Biden has offered Putin what the White House is calling “diplomatic off-ramps.” Jake Sullivan, Biden’s national security adviser, on Tuesday described these off-ramps as support for the largely moribund peace process based on the Minsk agreements in 2014 and 2015, and an invitation for Putin to engage in consultations with NATO over his concerns about the alliance.

These off-ramps risk letting Putin believe that he can erase Ukrainian sovereignty through diplomacy. The Russian president has already pressed Biden, according to the Kremlin’s readout of their Tuesday conference call, to give him assurances that the U.S. would oppose allowing Ukraine into NATO. Putin’s diplomats have also favored an interpretation of the Minsk agreements that would grant Russian-backed separatists in Luhansk and Donetsk nearly full autonomy from the central government in Kyiv, while denying that any of its forces are in those regions.

Kurt Volker, who served as former President Donald Trump’s envoy to the Ukraine peace negotiations, told me that he made it clear that the U.S. interpreted the Minsk agreements to mean that Russia would have to withdraw its forces and dismantle the illegal militias it supported before Ukraine would give Luhansk and Donetsk any special political status. Russia’s view of its obligations under the agreement “would actually undercut Ukraine’s sovereignty and reward Putin for the attack on Ukraine that he started in 2014,” Volker said.

The Biden administration has not publicly offered a detailed view of how it interprets the Minsk agreements, other than to say it supports the negotiations and, more generally, Ukrainian territorial integrity. The administration has also said it hopes to use those negotiations to de-escalate tensions within Ukraine and pursue a possible cease-fire or other confidence-building measures.

Nonetheless, offering NATO consultations and renewed U.S. attention on the Minsk process is itself a concession to Putin. To start, it pretends that Russia has been a good-faith actor in peace talks for the last seven years. But Ben Hodges, the former commander of the U.S. Army in Europe and the Pershing fellow at the Center for European Policy Analysis, said Russia has undermined the agreement in recent years by thwarting European attempts to monitor flashpoints in the Ukrainian war. To this day, Russia denies its forces are in Luhansk and Donetsk and says it cannot withdraw troops that are not there.

As for NATO consultations, Russia’s position is well known: It wants assurance that Ukraine and other former Soviet republics will never be allowed to join the alliance. Hosting a high-level meeting with Russia about Ukraine’s possible future in NATO will only sow further doubts about how much the West is willing to risk to protect what is left of Ukrainian sovereignty. It would also give legitimacy to the demands of Putin, whose goal is to break up the alliance, not accommodate it.

Biden should be careful: The U.S. and Europe have to deter Putin from starting another war against his neighbor. But the price of that deterrence cannot be Ukrainian independence.