Stakeholders should keep talking on Ukraine

Russia is now building up military forces around Ukraine, repeating a similar effort undertaken last spring. Direct discussion of the topic by Presidents Joe Biden of the U.S. and Vladimir Putin of Russia is desirable.

However, Russia’s borders with nations of Europe is primarily a European responsibility. The United States should be involved and supportive, but dominating negotiations encourages Europeans to avoid hard strategic leadership and spend time on their preferred, relatively easy tasks of building Euro-bureaucracy and talking among themselves.

Important progress in stabilizing Ukraine has been the result of initiatives by leaders of Europe. In February 2015, a Ukraine cease-fire resulted from all-night negotiation involving German Chancellor Angela Merkel, with President François Hollande of France.

The Cold War was rooted in different conceptions of society and relations among nations. Soviet leaders “are not like … us,” wrote American diplomat George Kennan in his book “Realities of American Foreign Policy,” also published in 1954.

Kennan, an expert on Germany and Russia, was among the most perceptive of American analysts of international relations, an always ardent student and writer. The containment policy he defined guided United States policies toward the Soviet Union and other communist powers throughout the Cold War.

Kennan headed the policy planning staff of the State Department during the Truman administration, when containment became the foundation of the U.S. approach to the Soviet Union. He became a target of conservatives, even as President Dwight Eisenhower confirmed containment as policy.

In 1979, Princeton University Press published one of Kennan’s most challenging books, “The Decline of Bismarck’s European Order.” After unifying Germany, Otto von Bismarck provided effective diplomatic leadership to continental Europe through managing complex alliances. His departure from office, and the mediocre leadership that followed, set the stage for World War I.

For our United States military services, the ongoing tensions related to Ukraine provides professional challenges, in the sense that the possibility of war is disturbing and taxing, but also opportunities. An essential component of containment, in particular deterrence, is credibility of our military. Military operations short of war that signal commitment and effectiveness require exceptional discipline along with careful planning.

Henry Kissinger insightfully notes that Ukraine has never really been unified or truly independent. For hundreds of years, that territory was part of Russia.

Today the European Union provides a unifying economic structure, while Germany has reemerged as principal leading nation on the continent. Angela Merkel since becoming chancellor of Germany in 2005 has brought greater financial discipline within the EU, especially regarding nations of southern Europe.

The core principle is self-determination for Ukraine’s people. That can discipline European diplomacy, with our support. 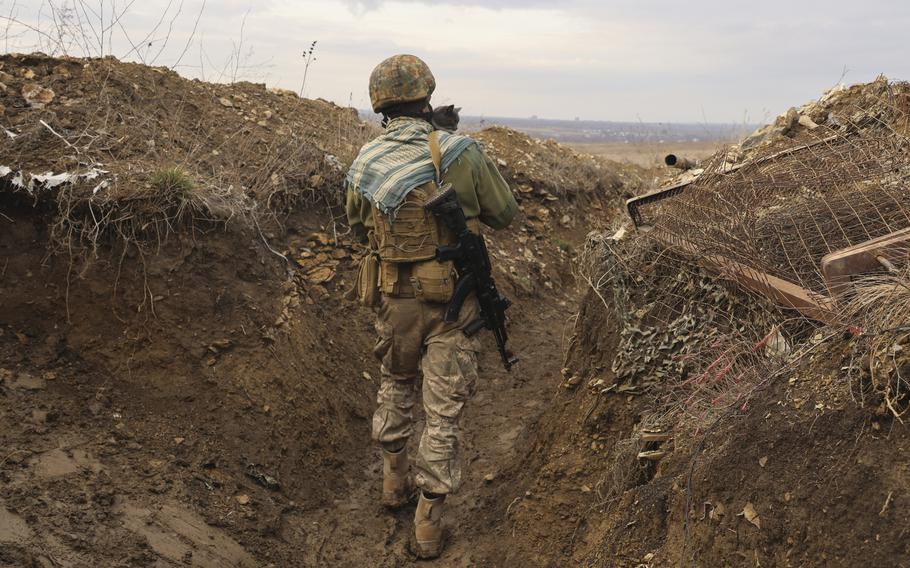 A Ukrainian soldier holds a cat and walks in a trench on the line of separation from pro-Russian rebels near Debaltsevo, Donetsk region, Ukraine, Ukraine Friday, Dec 3, 2021. (Andriy Dubchak/AP)