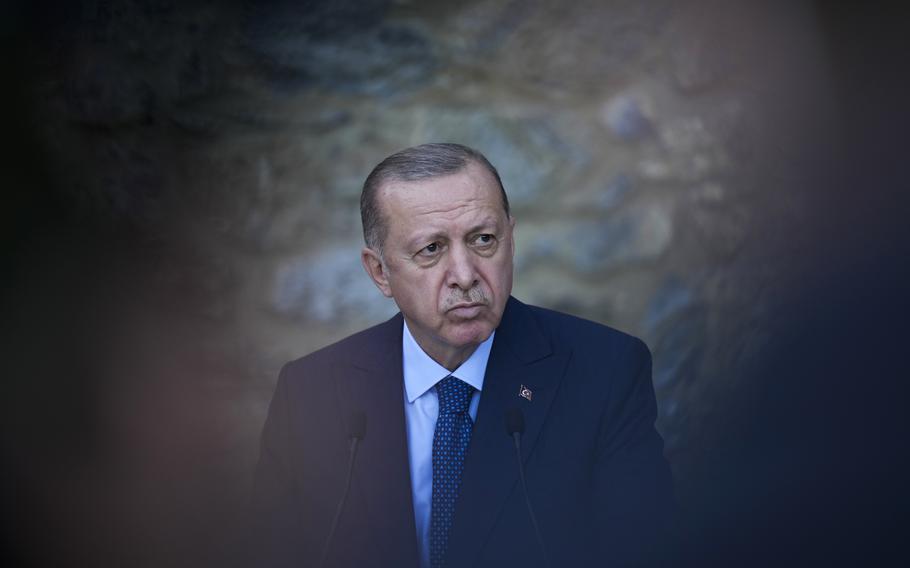 Who can protect the Turkish economy from the maneuvers of President Recep Tayyip Erdogan? His threat to expel 10 Western ambassadors may have been withdrawn, but not before the lira took another severe shellacking.

The diplomatic flare-up may have been the latest attempt to distract attention from the careening currency and reverse Erdogan’s own plunging popularity. The episode made clear that there are few checks and balances to the power he wields.

This is perilous for Turkey, which needs a steady hand to pilot it through economic and geopolitical turbulence. Its allies and rivals, as well as investors with exposure to the country, should brace for more bumps ahead.

Erdogan’s latest move was typical of the style that has come to characterize his decision-making. It stemmed from a joint statement issued by the ambassadors of the U.S., Germany, France, the Netherlands, Denmark, Finland, Sweden, Canada, Norway and New Zealand calling for the release from prison of the billionaire-philanthropist Osman Kavala.

Kavala is accused of participating in a failed 2016 coup attempt against Erdogan. He denies the charge. The president claims the businessman is in league with another billionaire-philanthropist, George Soros, and that the pair are seeking to harm Turkey. (Erdogan is has long been fixated with the Budapest-born American, whom he has described as the “famous Hungarian Jew Soros.”)

Western nations, alarmed by Erdogan’s sustained attack on democratic institutions since the abortive coup, regard the Kavala case as a test of the independence of Turkey’s judiciary and the rule of law. Ankara has disregarded a 2019 ruling for his release by the European Court of Human Rights; the Council of Europe, of which Turkey is a member, is threatening infringement proceedings.

The joint statement by the envoys, a diplomatic rarity, reflected the depth of these concerns. Instead of allaying them, Erdogan went on the offensive. He was apparently hoping to rally Turkish opinion against foreign interference. The president railed against the ambassadors for seeking the release of “this Soros leftover,” and ordered that they be declared personae non grata, which would require them to leave the country.

This is the diplomatic equivalent of the nuclear option, and out of proportion to the perceived offense. But there was nobody in the higher echelons of the government to restrain the president, and the impact was entirely predictable. The lira fell to record lows as investors wondered if Erdogan would follow through.

That he did not is only the smallest of mercies: The lira recovered, but marginally. Investors, like political analysts, can see a pattern in the president’s approach to foreign foes, real and imagined. That many of the targets are Western is especially worrying, since the Turkish economy depends heavily on trade in that direction.

This comes on top of his eccentric ideas about interest rates and his interference with the central bank. The lira’s slide began earlier in the month, with yet another rate cut, presumed to have been presidentially ordered, that ran against all reason at a time of rising inflation.

Investors are also worried about the president’s repeated calls for a new military push in Syria, where Turkish forces are in a stalemate against the regime of the dictator Bashar Assad, which has the backing of Russia and Iran. The prospect of an escalation of hostilities is yet another lead weight on the lira.

At the root of all this is a political crisis for the president. The poor economy is a drag on his popularity: Polls show his AK Party’s base is shrinking at an accelerating rate. The next general election isn’t until the summer of 2023, but there is growing speculation that Erdogan will call for an early vote, to try to extend his 18-year grip on power before a further erosion of support.

To add to the pressure, opposition parties are coalescing into a coalition that could challenge the AKP. These include former AKP stalwarts like Ahmet Davutoglu, who served under Erdogan as prime minister.

Emboldened by the president’s predicament, the main opposition party has called on the central bank to disregard Erdogan’s orders. The president responded by calling this a crime.

With those tensions showing no sign of abating, it’s clear investors are in for a bumpy ride.

Bobby Ghosh is a Bloomberg Opinion columnist. This column does not necessarily reflect the opinion of the editorial board or Bloomberg LP and its owners.