Warning: Jan. 6 was not a one-time event 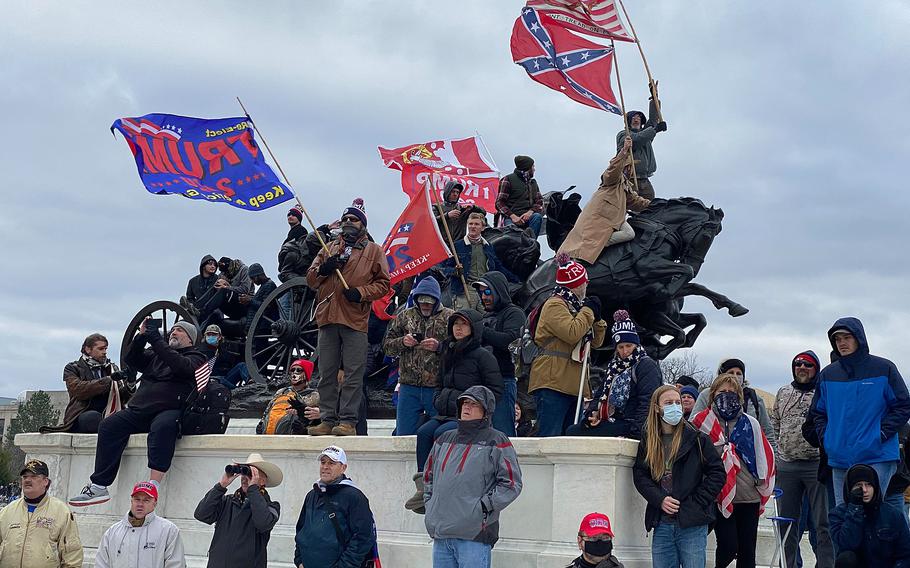 Nine months ago, when followers of President Donald Trump stormed the Capitol to halt the election of Joe Biden, the insurrection appeared to be the work of an extremist fringe led by right-wing militias and pro-Trump zealots.

But election denialism, the movement that spawned the uprising, has turned out to be much larger, more durable and every bit as worrisome as the violence of Jan. 6.

Stoked relentlessly by Trump, the belief that Biden stole the election has become a tenet of faith for most Republican voters. In fact, Biden won the election decisively — whether measured by the popular vote (where his margin was a healthy 7 million) or by electoral votes (where he won by the same majority Trump did four years before). It was not a close election.

Since Election Day, more evidence has proved that Trump’s claims of fraud are groundless. The former president’s lawyers filed 65 lawsuits to challenge the results and lost 64. (The single win wasn’t about fraud; it was a suit to stop Pennsylvania from letting voters correct errors on mail-in ballots.)

None of that has stopped Trump from continuing to proclaim his spurious gospel of fraud.

“We won on the Arizona forensic audit yesterday at a level that you wouldn’t believe,” he told supporters in Georgia. “[Biden] didn’t win in Arizona; he lost.”

Unfortunately, the former president’s disinformation campaign is succeeding — at least among the voters and donors he will need if he runs again. And it’s making violence around future elections more likely.

A CNN poll last month found that 78% of Republicans say Biden lost the election. Almost 6 in 10 said “believing that Donald Trump won the 2020 election” is an important part of being Republican — right up there with low taxes and limited government.

Another survey, the Economist/YouGov poll, found that election denialism has been growing. In January, only 33% of Republicans said Biden won the presidency “legitimately”; last month, it was down to 26%.

It’s tempting to consider this merely more evidence of what psychologists call “motivated reasoning,” the tendency to believe only those facts (in this case, imaginary facts) that conform with your partisan views. But it’s more dangerous than that. It means a Jan. 6-style insurgency could happen again.

“About 65 million Americans believe that Joe Biden stole the election and is an illegitimate president,” Robert A. Pape, a terrorism expert at the University of Chicago, told me last week. “That’s a lot of people.”

Of those 65 million, he added, about 21 million believe violence is justified to restore Trump to the presidency, based on polling conducted by Pape’s Chicago Project on Security and Threats. That number, he said, “is the pool of potential recruits” for a future insurrection.

“We know that only a small fraction of people who say they are willing to engage in violence will ultimately do so,” he added. “So the size of the pool is important.

“Think about this as if it were a wildfire. Wildfires are often set off by lightning strikes, but there will always be lightning. The important question is how much dry wood is on the ground when it strikes. The tinder is more important than the match.”

In other words, the growing pool of election denialists is like a thickening layer of dry wood on a forest floor.

One more finding from Pape’s research: Most of the rioters arrested after the Jan. 6 insurrection aren’t militia members or marginal cranks.

“More than half are business owners, executives or white-collar professionals — doctors, lawyers, accountants,” he said. “Only 14% are members of militia groups, which means almost 90% are not. This is more a mainstream set of people than a fringe.”

If Republicans lose any close congressional elections in 2022, or if Trump or any other GOP candidate loses the presidential race in 2024, a large pool of voters is primed to believe the only explanation must be fraud — and some are willing to resort to violence to reverse the result.

Americans once saw Election Day as an occasion that bound the nation together, the culmination of a peaceful competition that ended with a graceful concession speech from the loser — an essential declaration of faith in the democratic system.

Thanks to him and his abettors, our next few elections will be dangerous opportunities for turmoil, instability — even, perhaps, another insurrection. It may not come in the same shape as Jan. 6; the Capitol Police may be better prepared next time. But Trump’s disinformation campaign isn’t a victimless crime. It has already made post-election violence more likely.