China competition should not lead to crony US industrial development

The U.S. Senate has found bipartisan agreement on a bad habit neither party can resist: spending money and blaming China for it. Despite a $28 trillion national debt, the Senate approved close to a quarter-trillion funding program through the United States Innovation and Competition Act for American manufacturing and technology sectors increasingly challenged by China.

While addressing China’s rise is necessary, it’s troubling to see U.S. policymakers embracing the idea that Chinese development models are so successful that they require the United States to rethink its traditional market-based approach.

In May 2015, Beijing launched “Made in China 2025” to promote Chinese independence from external supply chains. The Senate legislation emphasizes many of the same investments as China. These “areas of dominance” as Senate Majority Leader Chuck Schumer described them, include quantum computing and biomedical research.

In an earnings call this year, Lockheed Martin CEO James Taiclet credited “vertical integration” in China’s industrial base for the country’s “capabilities and velocity.” He suggested that the American defense industry should follow suit with state investments in defense firms and said government officials should ask themselves, “How does China operate its defense industrial base?”

The curious thing about these arguments is that China stands as a case study on the follies of industrial policy. Beijing’s state-dominated approach poses challenges to the country’s competitiveness. In the absence of a boundary between the Chinese state and its economy, the military rules.

Since the 1920s, the People’s Liberation Army has invested in more than 20,000 enterprises. Reforms notwithstanding, senior military leaders cultivate connections with commercial entities. That fosters a culture of corruption. Ostensible efforts to acquire better technology lead to equipment purchases that align more with personal gain for military decision-makers than improvements in combat units.

Cronyism accounts for the complications in Chinese endeavors to produce military equipment components in-house, such as the manufacturing of jet engines, as well as the weak maintenance systems seen across Chinese military platforms. Chinese leaders rationalize their approach in the name of self-reliance. Yet China's dependence on foreign technology, such as software from the United States, results from shortcomings in Chinese domestic industries. State subsidies encourage their industry leaders to copy weapons systems from other nations. Or some might say “steal” them through industrial espionage and computer hacking operations.

One can hope that U.S. industry figures invoke China’s business model less out of ideological conviction and more as an excuse to enrich their own bottom lines.

Which brings us back to Lockheed Martin.

The world’s largest defense contractor with $65 billion in sales last year apparently hopes that playing the China card will overcome expected opposition on its planned $4.4 billion purchase of Aerojet Rocketdyne, a merger that would vertically integrate the U.S. missile defense industry and reduce domestic competition.

Since Aerojet is the last independent American producer of solid rocket motors, acquisition by Lockheed would push other major U.S. defense companies out of the missile business. Or they would have to buy from foreign suppliers. Critics warn that this would stifle American innovation and raise prices on taxpayers. Though announced in December 2020, the planned acquisition still must be approved by the Defense Department and Federal Trade Commission, given the high stakes involved.

Air Force Secretary nominee Frank Kendall has lamented the “trend toward fewer and larger prime contractors” and its “potential to affect innovation.” While serving as the Under Secretary of Defense for Acquisitions, Technology and Logistics during the Obama administration, Kendall published a book titled “Getting Defense Acquisition Right” that expounded on those points.

In the current political environment, Lockheed Martin should think twice before they press ahead on dubious mergers that create monopolies and arguably undermine U.S. national security. The deference the defense industry has received from both major parties is coming under renewed threat from activists who question the rationale for U.S. missile defense programs.

The Council for a Livable World just sent a letter to President Joe Biden co-signed by 65 “national security leaders” urging him to include missile defense as part of “strategic stability talks” with Chinese and Russian leaders. Their arguments rely on the dubious, Cold War-era notion that American missile defense, rather than the revisionary ambitions of the authoritarian regimes in China and Russia, are to blame for a potential arms race.

The point, however, is that making a credible case for defense programs requires America’s leading defense contractors to act responsibly and consistent with the competitive, capitalistic nature of the U.S. economy. So as the House deliberates the Senate bill, Congress should bear in mind that competing with China does not require Americans to trade free markets for Chinese-style statism.

Pratik Chougule, a Washington-based researcher, served at the State Department in the Office of the Under Secretary for Arms Control and International Security. 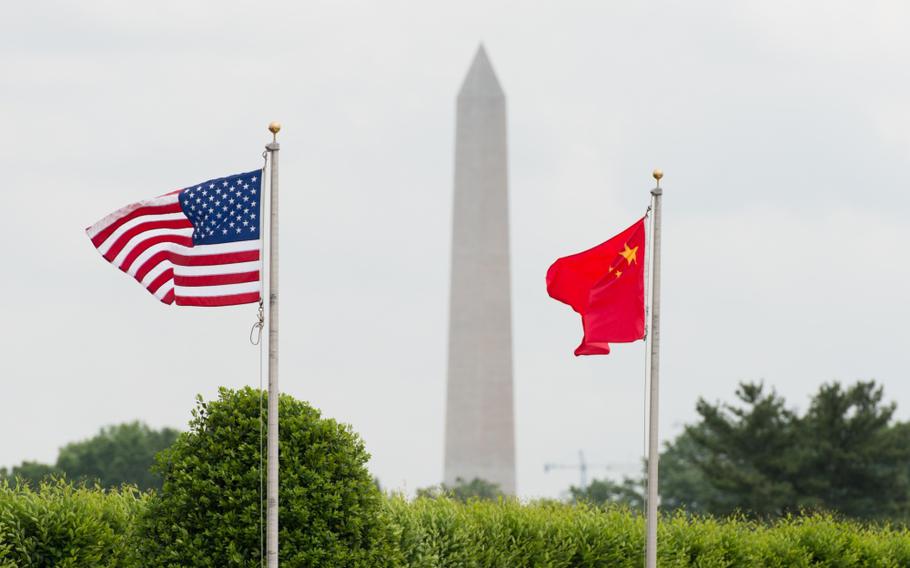 U.S. and Chinese flags fly before a full-honors welcome ceremony for a Chinese general outside the Pentagon in Arlington, Va., on May 15, 2014. (DOD photo by D. Myles Cullen/Released)