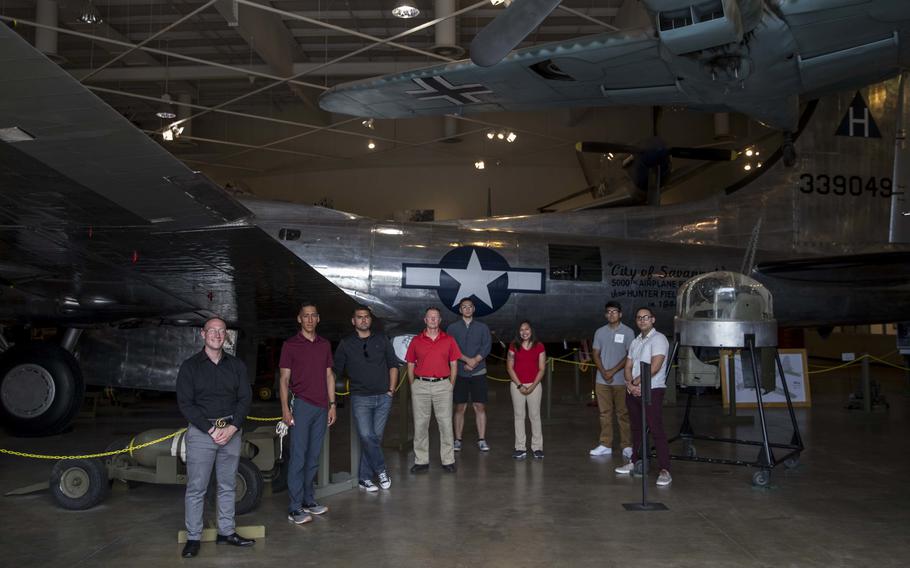 U.S. Marines with 6th Marine Corps District pose for a group photo next to the "City of Savannah" Boeing B-17 Flying Fortress on display at the Mighty Eighth Air Force Museum in Pooler, Georgia on June 5, 2020. (Jack Rigsby/U.S. Marine Corps)

Others in the family knew the basic details. He was an enlisted man in the U.S. Navy. He served on a Pacific fleet battleship. His station was in the engine room. His vessel was among the 300 Allied ships in Tokyo Bay when the Japanese surrendered.

That's about all, although he liked to tell his pool diving board-timid grandsons about the Navy's abandon ship drills: Climb up on the deck railing, close your eyes and jump. Pinching your nose shut to keep water out of your nostrils was optional, albeit recommended.

On a least one occasion, he showed my brother and me how to turn a pair of trousers into a floatation device.

A study of history tells me he and his shipmates saw plenty of combat. The sea battles of the South Pacific were intense between 1942 and 1944. Coral Sea. Midway. Guadalcanal. Savo Island. The Philippines.

Some 27,000 U.S. sailors died in the Pacific Theater. Paul Barnes wasn't among them, but he knew some who were. It's why he spent Memorial Days at the township cemetery while the rest of us were at the baseball diamond.

Each year as the Memorial Day holiday approaches, I think about my granddad and what his service meant. As a now longtime resident of Savannah with an interest in history, those reflections also lead me to contemplate the sacrifice made by members of a military unit formed in Savannah at the dawn of World War II: The Mighty Eighth Air Force.

The fighting force was founded in the Chatham Armory on Bull Street, a building now home to American Legion Post No. 135, in January 1942. By August, the Mighty Eighth was flying combat missions.

While the U.S. Navy defeated the Japanese ship to ship in the Pacific, America and her allies bested Nazi Germany airplane to airplane. Bombers leapt from the ground in England to commence raids on the German lines and industrial centers. These lumbering aircraft braved enemy fighters and ground-based defenses to deliver their payloads and in returning back across the English Channel to base.

Losses were catastrophic. The Mighty Eighth suffered the highest casualty rate of any U.S. military organization in World War II: 26,000 men killed — nearly as many as the Navy lost in the Pacific despite having a fraction of the service personnel.

Bomber crewmen stood only a 20% chance of surviving their tour of duty of 25 missions. Capt. John Luckadoo, a B-17 pilot, recalls a welcoming speech given by a superior officer prior to his first mission.

"Only one of the three of you are going to come back."

Visiting the National Museum of the Mighty Eighth Air Force, located off Interstate 95 in Pooler, is an unforgettable experience that goes beyond the restored aircraft on display in the combat gallery. Exhibits tell the comprehensive story of the Mighty Eighth, from what it was like to prepare for and execute a bombing mission to how airmen shot down behind enemy lines survived.

The museum is celebrating its 25th anniversary this year and its 25th Memorial Day commemoration. Beginning Thursday, May 27 and running through the holiday on May 31, the Mighty Eighth will honor the 26,000 killed in action during World War II with a display of 26,000 American flags in the museum's memorial garden.

This "Flags for the Fallen" promises to be a reminder of the magnitude of the Mighty Eighth's sacrifice. The exhibit's opening will be marked by a flyover of a B-52 bomber at 10 a.m. Thursday as the modern-day members of the Eighth Air Force pay tribute to those first heroes.

Thankfully, the story of those 26,000 Mighty Eighth airmen continues to be told. Learning more about them is time well spent.