US troops leaving Afghanistan is bad news for Taliban 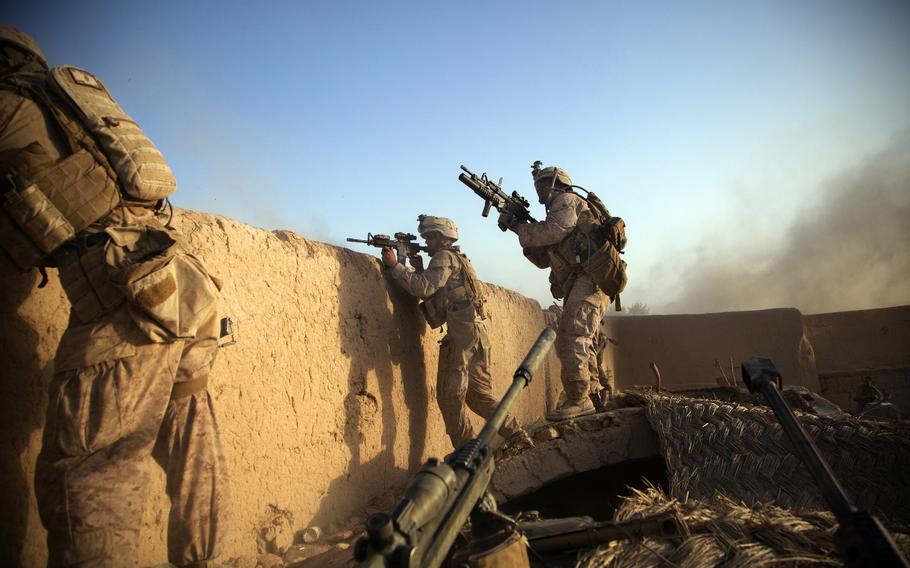 Marines from the 2nd Battalion 5th Marine Regiment return fire in Afghanistan after the enemy fired an RPG rocket at their position on July 15, 2012. (Nelvin C. Cepeda, The San Diego Union-Tribune/TNS)

President Joe Biden’s decision to withdraw all U.S. forces from Afghanistan triggered backlash from some in the media and members of Biden’s own administration. Some analysts say the plan to pull out all troops by Sept. 11 jeopardizes Washington’s peace negotiations with the Taliban and increases chances for an upsurge in violence.

But the decision is sound and based on a lesson learned: The conflict in Afghanistan cannot be solved by military means.

For the past 20 years, the Taliban have used the word “invasion” as justification for their religious obligation to carry on jihad against the infidel invaders, much as the mujahedeen did during the 1980s when they were fighting against the Soviet Union. They had plenty of young Afghans from madrassas in Pakistan to recruit.

But now as the “invaders” have one foot out the door, the Taliban find themselves without an enemy and no incentive to offer soldiers for carrying out a holy war. Foreign supporters of the jihad will zip their pockets and see no reason to invest in a commodity that has lost its value.

More importantly, the Taliban have lost the political momentum they carved out for themselves when they signed a peace agreement with the U.S. early in 2020, which seemed to boost the Taliban’s image as a force to reckon with.

But the Biden administration does not appear to regard the Taliban as “tough and smart” — words that former President Donald Trump used to describe them.

A big blow came in the Moscow conference last month when the Taliban’s prominent “friends” Pakistan, Russia and Iran all voiced opposition to the reestablishment of a Taliban Emirate regime, fearing it could spread Islamic extremism into their own countries.

More bad news for the Taliban is that their soldiers won’t be welcome to enter Kabul, as they were in 2006 to restore law and order. Today, they likely would face severe resistance from citizens who would reject the imposition of an Emirate regime.

Taliban leaders are not ambiguous about what they really want. Whenever they are asked to explain what kind of political system, schooling, economy, foreign policy and treatment of women they espouse, their answer is a single word: Islamic. This is why they are afraid of peace.

So what’s the best path forward?

Whereas troop withdrawal is the right thing to do, completely abandoning Afghanistan could send the country into anarchy and once again turn it into a potential den for al-Qaida and other terrorist groups. This could be avoided if the U.S. and other allies offer support for Afghanistan until the country is stabilized and ready to safeguard its newfound freedoms of speech, women’s rights and free elections.

Afghanistan isn’t ready to stand on its own feet without foreign financial aid. Its government still relies on international funding for the vast majority of its security costs.

The future could be brighter for Afghanistan now that the Taliban are losing their hold on the population. The only friendship they now enjoy is with Pakistan, which still supports the Taliban’s control-and-command center on their soil. But Pakistan may soon come to its senses. As the Brookings Institute wrote, “If you grow vipers in your backyard, you’re going to get bitten.”

A year from now, the Taliban could be talking about “the good old days” when they were fighting a holy war. Now they have one logical choice: join the political process and return to normal life.

Keeping boots on the ground in Afghanistan was a bad recipe. It only prolonged a war that had no military solution. Biden’s decision truly could lead to peace if the U.S. and its allies continue their support for Afghanistan.

Wahab Raofi, an Afghan-born American, is a graduate of Kabul Law School. He formerly worked as an interpreter for NATO forces in Afghanistan.