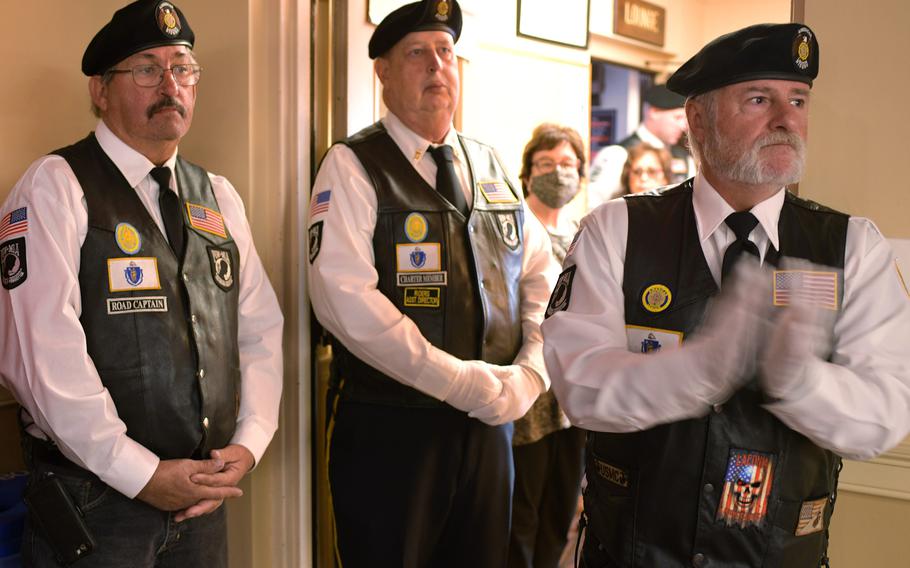 “A Day of Remembrance” program was held Sunday at the Vernon Hill Post 435 in Worcester, Massachusetts. (Christine Peterson/Telegram & Gazette)

WORCESTER, Massachusetts (Tribune News Service) — More than 100 veterans, Gold Star family members and people involved in the construction of a hospital in the central highlands of Vietnam 50 years ago gathered Sunday at Vernon Hill American Legion Post 435 in commemoration and remembrance.

The ceremony aimed to mark the 50th anniversary of the building of the Living Memorial Hospital in Lien Hiep, Vietnam, but it also served as a tribute to the Gold Star families of the 147 men from Worcester County, Massachusetts, who died or went missing in action during the Vietnam War.

In the late 1960s, Frank Carroll and his fellow veterans at the Vernon Hill American Legion Post met with local Gold Star mothers — those whose sons had been killed or were missing in action during the Vietnam War, which was still raging — to find a way to honor the memory of the loved ones they lost.

The group partnered with a humanitarian organization called Project Concern, led by Dr. Jim Turpin, to honor their sons' memories by building a hospital in a village that had virtually no access to medical aid.

The ground raised $100,000 locally and broke ground in Lien Hiep in 1968. Two years later, Carroll and the Gold Star mothers flew to Vietnam for the dedication of the Living Memorial Hospital.

But after the U.S. pulled out in 1975 and the North Vietnamese regained control of the country, communication fell silent and the status of the hospital was unknown for more than a decade. Eventually, lawmakers were able to arrange a meeting with the Vietnamese ambassador to the U.N. Carroll, Turpin and others were told the hospital was still going but needed critical equipment and supplies.

The news prompted a new $1.5 million fundraising push in the early 1990s to get the hospital the supplies it needed.

"I couldn't have built Lien Hiep myself," Turpin said during his keynote remarks Sunday.

Turpin talked about early experiences that instilled in him a desire to help others. He talked about driving from his comfortable neighborhood in the San Diego, California, area in the 1950s across the border to poor communities in Mexico where he provided medical care. He talked about saving two young children, but said they, in fact, saved his life and set him on a path that led to his role in the construction of the hospital in Vietnam.

Gold Star families filled the audience at the remembrance Sunday afternoon. Lynne Dynice was just a small child when her father, Marine Corps Capt. Paul McNally of Fitchburg, died in a mid-air collision between two helicopters over the South China Sea June 6, 1965.

She said he was just 28 years old when he was killed and had three children under the age of five. Dynice's grandmother, Mary McNally, was an original member of the Gold Star Mothers Committee that led the local push for the hospital in Lien Hiep. She said she was glad to be able to attend Sunday's event.

Dennis F. Shine III, son of Corporal Dennis F. Shine Jr., a Worcester native killed in Vietnam in 1969, said he grew up in the area but moved to Washington, D.C. after college. He said he was glad to come back for the remembrance, but was also glad to be able to catch up with family. The state swimming pool on Vernon Hill is named for his father.

Shine said it took some time but he eventually found connection with other Gold Star families through Sons and Daughters in Touch, a nonprofit organization that locates, unites and supports the now-grown children of American servicemen who died during the Vietnam War. He said it has been a life-changing association and he now sits on the organization's board of directors.

Mayor Joseph M. Petty thanked Carroll and everyone else who played a part in organizing the event. He said 50 years later, the city continues to honor the Vietnam veterans' sacrifices. He said the construction of the hospital in Lien Hiep, which is still in operation, embodied the grace and hope of a grateful city.