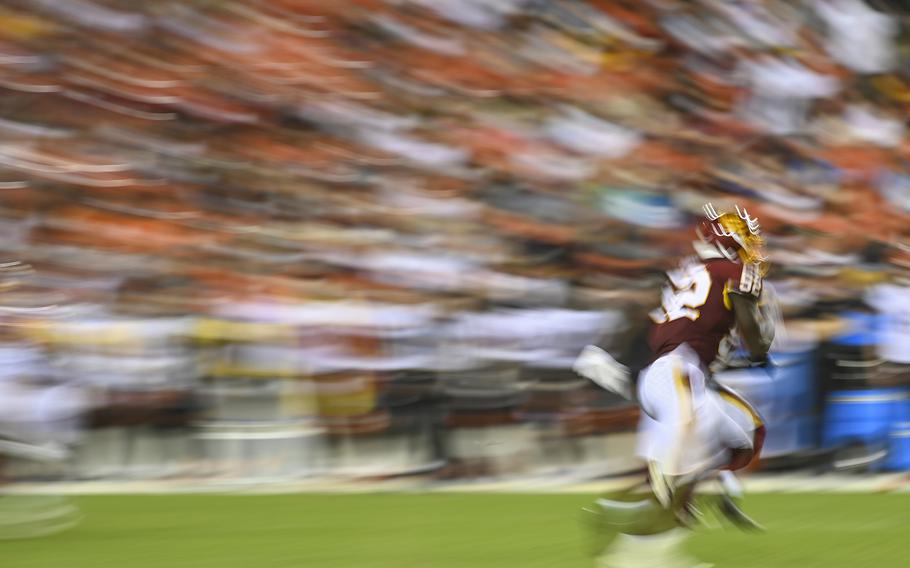 The leagues, with high vaccination rates and strict protocols featuring frequent coronavirus testing, already have enacted policies that put them in compliance with - and beyond - the administration's new requirements. To them, Biden's directives amount to an attempt to bring the rest of the nation closer to what the sports leagues implemented long ago to remain operational amid the pandemic.

No major pro league has instituted a vaccination requirement for its players, instead stressing education and incentives. But some leagues and teams have vaccine mandates for staffers.

"At 93.5% players vaccinated and 98-plus percent of staff vaccinated, we've really created in our clubs the worlds in which all the public health officials were sort of hoping for, a highly vaccinated group of people getting together," Jeff Miller, the NFL's executive vice president of communications, public affairs and policy, said in a phone interview Wednesday, a day before Biden's announcement. "And so in many ways, it's an opportunity for us to share our learnings with public health officials about what the future might look like, I think, larger than just the football team."

Biden's plan includes ordering businesses with more than 100 employees to require workers to be vaccinated or face weekly testing.

The NFL has said it is interested in a vaccine requirement for all players, but the NFL Players Association has not consented to that. The league mandated vaccinations for coaches and team staffers for them to be permitted to work closely with players. Under the protocols developed by the league and NFLPA, vaccinated players and staffers will be tested weekly this season. Unvaccinated players remain subject to the same daily testing that was in effect last season.

"We're doing the once-per-week surveillance of everyone," Allen Sills, the NFL's chief medical officer, said in a phone interview Wednesday. "That's more than anyone else is doing . . . in society. Health care, for example, where I work, we're not testing vaccinated people routinely unless they have symptoms. ... We're doing more testing than what the CDC and others have recommended."

The NFL declined to comment in detail Friday on Biden's mandate, merely stressing its vaccination rate and daily testing of unvaccinated players. The league's season began Thursday, amid the surge of the highly transmissible delta variant. But Sills said, "I feel very optimistic because I believe that the vaccines have proven very beneficial through all of the variants that we've seen so far."

The mandate does not change much for Major League Baseball, according to people familiar with the league's thinking, because players and other uniformed personnel have been subject to regular testing under the protocols since the beginning of the current season. Representatives of the MLB Players Association have said repeatedly that its members would not agree to making the vaccines mandatory, though the union did agree to incentivize vaccination before the season by relaxing some protocols for teams on which 85 percent of players and coaches were fully vaccinated.

Seven teams have yet to reach that threshold; 86% of coaches, players and uniformed staff have been vaccinated leaguewide, according to an MLB spokesman. The league office requires vaccination of all its employees.

The mandate may have implications, however, for MLB front offices and non-uniformed personnel. The Washington Nationals, Houston Astros and Baltimore Orioles in recent weeks have made vaccination a condition of employment for non-playing staffers. That led to at least one high-profile departure from the Nationals' front office, by longtime executive Bob Boone. Other teams have taken less stringent approaches to their non-baseball staff. Some organizations were actively considering requiring vaccinations of all non-uniformed employees in the weeks before Biden announced his order.

The NBA, in a memo distributed Aug. 27 to team presidents and general managers, mandated vaccinations for "team, arena and other personnel under team control" who will interact with or be in "close proximity" to players during the upcoming 2021-22 season. Those employees include coaches; referees; front office executives; medical personnel; security, public relations and social media staffers; photographers; scorer's table employees; and broadcasters, among others.

The memo, a copy of which was obtained by The Washington Post, requires that such employees be fully vaccinated - more than 14 days removed from their final shot - by Oct. 1. The season opens Oct. 19.

The NBA's policy for players, negotiated with the National Basketball Players Association, does not require vaccination. However, the league's "anticipated health and safety protocols," communicated to teams in a memo dated Sept. 1, will require each team to maintain a dedicated area at its arena to handle "rapid molecular testing" for players who aren't fully vaccinated. Under the proposed rules for the upcoming season, unvaccinated players will be tested on game days and practice days, while vaccinated players will be exempt from regular testing.

The NBA postponed 31 games during the first three months of the 2020-21 season due to dozens of positive tests among players. But widespread vaccination among players, coaches and team staffers produced a more stable situation during the 2021 playoffs, which saw only a handful of positive tests and no interruptions. NBPA executive director Michele Roberts told Yahoo Sports in July that "90%" of players had been vaccinated. The league plans to further review Biden's mandate to ensure compliance.

The NHL is continuing to follow its protocols released in early September. All individuals involved in the league have been "strongly encouraged" to get vaccinated, ideally with the Pfizer or Moderna vaccines, according to the league. It is mandated that anyone whose job requires personal interactions with club personnel be fully vaccinated. Those people include coaches, general managers, on-ice officials, security staff, bus drivers and food-service employees.

Individuals in the league who are not fully vaccinated must be tested daily. Teams will also be able to suspend unvaccinated players who are "unable to participate in club activities."

Major League Soccer said its players are not required to be vaccinated but slightly more than 95 percent are. MLS requires its league-office employees working on-site or traveling for business to be vaccinated, while deferring to each of its 27 teams for individual club policy. D.C. United said last week that employees are required to be fully vaccinated by Oct. 18 as a condition of continued employment. D.C. United players are under contract with the league and exempt from that requirement; players and technical staff are tested multiple times per week, whether vaccinated or not.

"As we have from the beginning of the pandemic, the NWSL will continue to rely on the guidance of its Medical Task Force, as well as federal, state and local guidance," the league said, "and update our policies and procedures accordingly."

The Washington Post's Samantha Pell and Steven Goff contributed to this report.