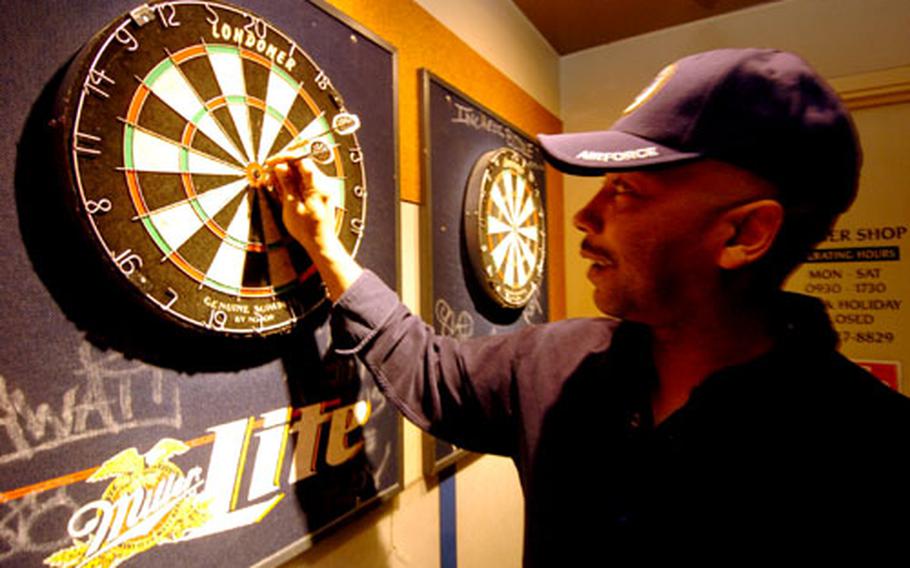 YOKOTA AIR BASE, Japan &#8212; This won&#8217;t be the first time the Yokota Enlisted Club has taken aim at a base dart league.

Trying the intramural approach, she said, might &#8220;force people to get a team together for Commander&#8217;s Trophy points, plus have fun at the same time.&#8221;

Of course, they don&#8217;t have to join. Squadron representatives must deliver letters of intent or no-thank-yous to the Yokota Main Fitness Center sports department by March 27.

Each unit may enter one five-member &#8220;A&#8221; squad designated as the Commander&#8217;s Trophy team. Additional teams will be given recreational status.

A mandatory organizational meeting is planned for April 4 at 11 a.m. in the Yokota Enlisted Club&#8217;s Spectrum Lounge. Team captains and representatives will review league rules and set a date for the season opener.

Maldonado said she hopes to start the 12-week campaign on May 8. Playoffs would begin in August, followed by a league banquet and trophy presentation.

Maldonado says she and her husband, Staff Sgt. John Maldonado, helped launch a dart league a few years ago at Hurlburt Field, Fla.

Intramural matches would take place in the Spectrum Lounge, which is being outfitted with up to 10 new dartboards. Extra lighting also will be installed.

For more information about the league, call Maldonado at DSN 227-8820.