Hospital corpsmen attached to U.S. Naval Hospital Yokosuka wash "victims" inside a chemical wash station during a joint medical training with Japanese forces at the base on Wednesday. (Christopher B. Stoltz / S&S)

Hospital corpsmen attached to U.S. Naval Hospital Yokosuka wash "victims" inside a chemical wash station during a joint medical training with Japanese forces at the base on Wednesday. (Christopher B. Stoltz / S&S) 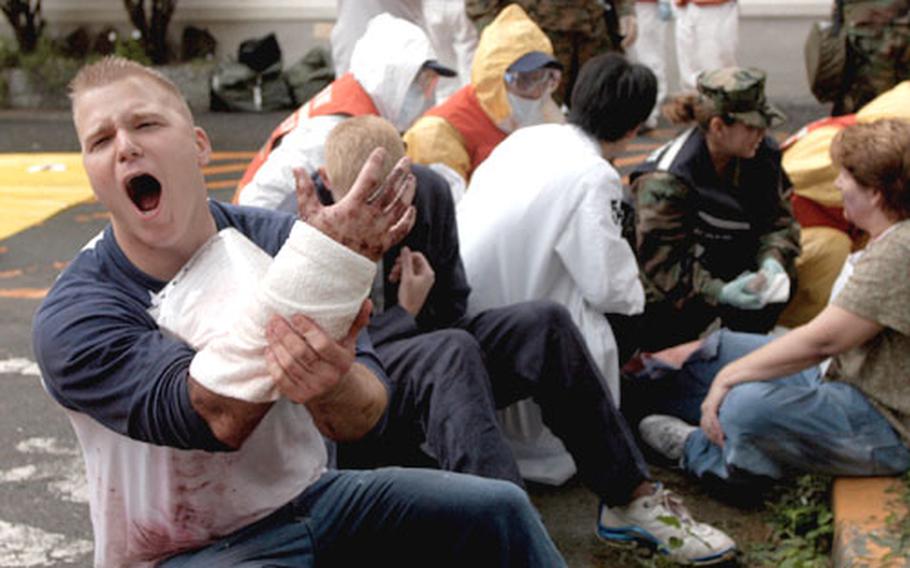 Corpsman Samuel Karr yells for help Wednesday after "suffering" 2nd- and 3rd-degree burns during a simulated terrorist attack at Yokosuka Naval Base. None of the injuries were real, but the victims were convincing. (Allison Batdorff / S&S) 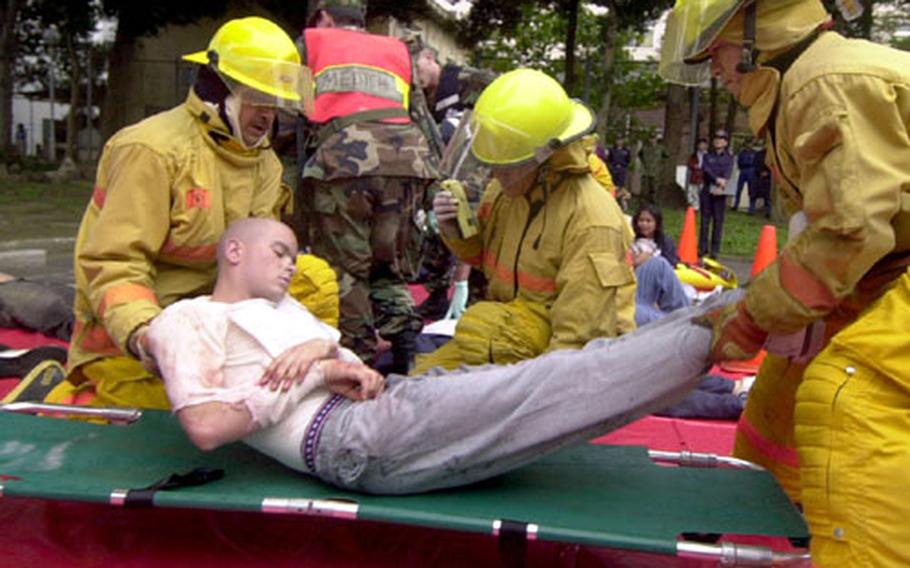 Seaman Paul Tchiguer is placed onto a stretcher reserved for the wounded during a joint medical training with Japanese forces Wednesday at Yokosuka. (Christopher B. Stoltz / S&S) Petty Officer 1st Class Rubi Cedeno and Lt. Cmdr. Alan Ross set up the water supply for a chemical wash station during the exercise at Yokosuka. (Christopher B. Stoltz / S&S)

A terrorist bus exploded in her barracks. She broke her femur. She fractured a cervical bone. She was exposed to a chemical agent, then hosed down in a decontamination process. Then she died when a fireman accidentally moved her head.

The three-hour drill was to test the hospital&#8217;s capacity to respond to a terrorist attack on the base, said Lt. Robert Windom, U.S. Naval Hospital&#8217;s emergency manager.

The scenario was this: A bus enters through Womble Gate. A high-speed chase ensues with base security. The bus takes the first right and smashes into a JMSDF van, just outside the enlisted barracks. A chemical agent is released.

The response is quickly planned, coordinated and executed. More than 100 responders are mustered. Decontamination tents are erected. Japanese-speaking interns are brought to the scene for translation. Victims are assessed and cared for.

A &#8220;hot-wash&#8221; was held afterward to reflect on the day and take comments and suggestions for improvement.

The hospital hosts large-scale drills like this twice a year, Windom said. In June, they set up an emergency clinic in Ikego, he said.

For her part, Collins liked the exercise, even if she had to die.