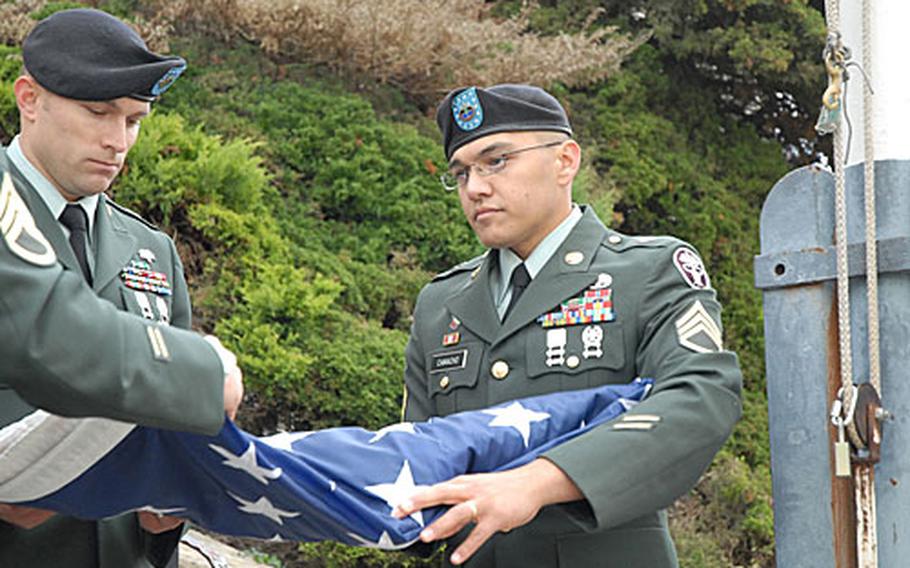 After serving the nearby military communities since the 1940s, the W&#252;rzburg American Hospital officially shut its doors Friday.

During a ceremony marking the end of an era for Army medicine in Bavaria, the flag was lowered one final time.

For some of the assembled soldiers and German and American civilians, it was a hard sight.

What was hard, Purucker said, was watching the drawdown of troops and services, and coming to find lights off and doors shut.

On drawdown orders since September 2005, the hospital ceased emergency and surgical services the following June.

By this May, orders were given to clear the facilities and consolidate remaining medical operations on nearby Leighton Barracks by Sept. 30.

&#8220;I knew when I came to Germany that part of my mission would include transformation &#8230; [but] there&#8217;s a sense of sadness, like saying goodbye to a member of your family,&#8221; said Col. Theresa M. Schneider, commander of Bavaria Medical Department Activity.

As the last commander stationed in W&#252;rzburg, she has overseen the closure.

The closure was another in a series of steps moving Army medicine in Bavaria from hospital-centric to ambulatory care-centric, or, &#8220;having primary care right there where the soldier is,&#8221; Schneider said.

&#8220;Bavaria is in the lead on the realignment, transformation and decentralizing health care,&#8221; she said.

As Leighton also is shutting down over the next year, Bavaria MEDDAC offices are moving to Rose Barracks in Vilseck.

Built in 1937, the W&#252;rzburg hospital originally provided care for soldiers and civilians in the German army.

During World War II, what was once a 300-bed facility held more then 2,000, with patients in the basement and hallways.

Many of the units stationed in the hospital since the end of the war were called to deploy, most recently to support operations in Iraq and provide earthquake relief in Pakistan.