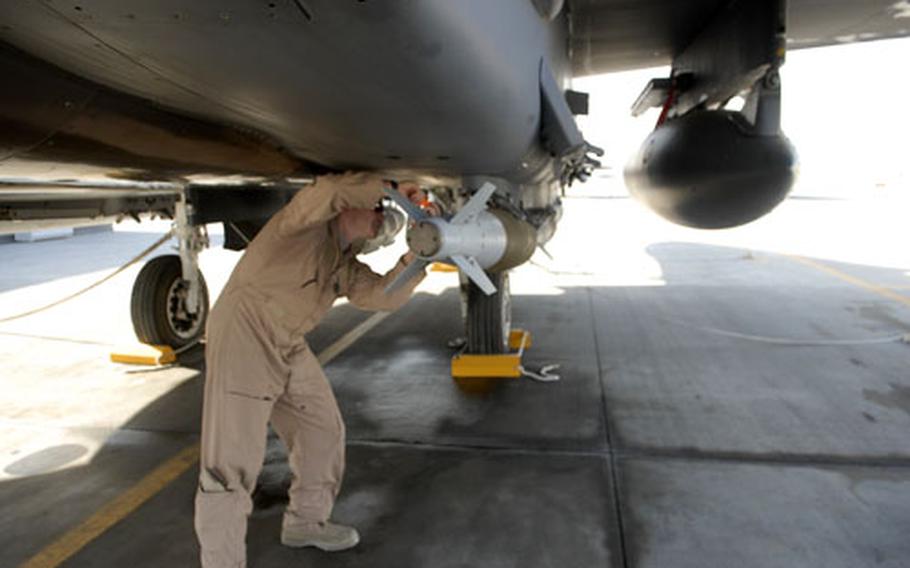 BAGRAM, Afghanistan &#8212; A fleet of U.S. Air Force F-15 fighter aircraft has been placed on &#8220;ground alert&#8221; status in Afghanistan pending inspections to each plane after a crash in the States raised concerns about safety, a top U.S. commander said on Tuesday.

All F-15s at U.S. bases around the world were grounded by the military after one of the planes crashed in rural Missouri on Friday.

However, Air Force Col. Eric Nelson, commander of the 455th Air Expeditionary Operations Group, currently based in Afghanistan, said the situation would not hamper the U.S. war effort in Afghanistan.

&#8220;We are not missing a beat because [Combined Forces Air Component] has so many air assets at its disposal and the bottom line is the people of Afghanistan have continuous air power coverage over their country.&#8221;

Nelson said more than 50 F-15 crews in Afghanistan were affected by the grounding status.

The Air Force has jet fighters based in Bagram and the southern city of Kandahar.

After the interview with Nelson, Air Force Capt. Mike Meredith, public affairs officer for the 455th Air Expeditionary Wing, said that &#8220;these aircraft can still be asked to perform missions, if they are called upon.&#8221;

Maj. Cristin Marposon, a spokeswoman for Air Force headquarters at the Pentagon, said that &#8220;ground alert&#8221; means commanders are substituting other bombers and fighters for the F-15s&#8217; regular missions.

Marposon said that &#8220;at this point,&#8221; Air Force officials do not know how long the F-15s will be ordered to stay out of the skies. Before the jets can be released for unlimited duty, &#8220;structural assessments and analyses have to take place&#8221; of the aircraft that crashed Friday, she said.

However, even at this early point investigators believe the accident may have been caused by something &#8220;inherent in the airframe&#8221; &#8212; as opposed to outside factors, such as a bird strike, or pilot error &#8212; to justify the fleetwide grounding, Marposon said.

&#8220;The preliminary findings, given this incident, speak to a significant airworthiness concern,&#8221; Marposon said.

Nelson said ground troops were &#8220;absolutely not&#8221; at risk or vulnerable in ongoing operations, emphasizing that other planes were still able to respond within roughly 20 minutes to reach any U.S. troops countrywide.

Other attack aircraft used have included the technologically advanced B-1 bomber and the slower A-10 close-air support aircraft, but the A-10&#8217;s service recently ended in Afghanistan, according to the Air Force.

When asked whether other U.S.-branch assets were being diverted from the Indian Ocean or elsewhere, Nelson said, &#8220;It&#8217;s certainly possible.&#8221;

In the meantime, Nelson said, crews are maintaining the planes until the inspection is complete.

Stars and Stripes reporters Lisa Burgess and Jeff Schogol contributed to this report from the Pentagon.