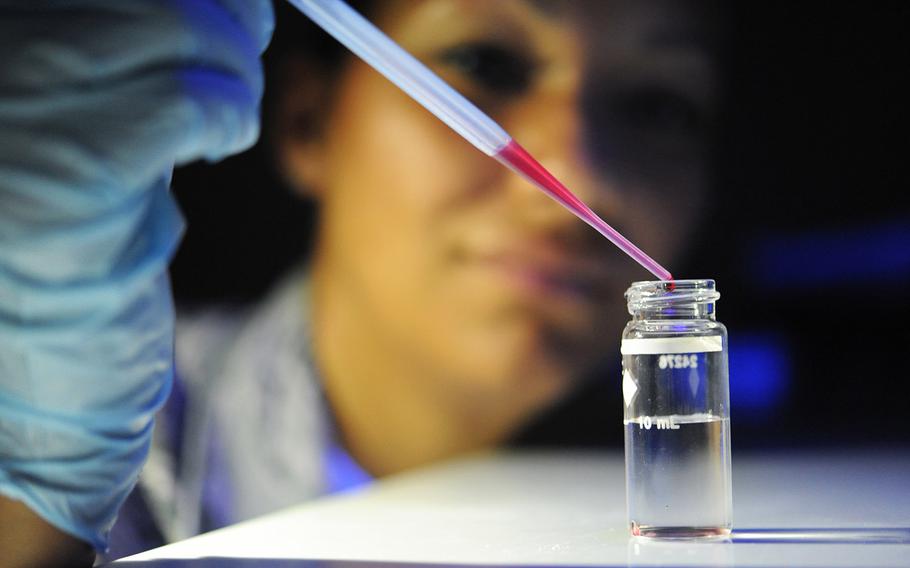 U.S. Air Force Staff Sgt. Amber Metts, 19th Aerospace Medicine Squadron Bioenvironmental, checks the pH level in a water sample May 18, 2017, at Little Rock Air Force Base, Ark. The purpose of the test is to check for harmful contaminants in the water. (Grace Nichols/U.S. Air Force)

WASHINGTON — A federal watchdog has found most military bases have caught up on reporting about concerns of water contamination, but plenty of work remains to have more bases come into compliance and end future fears of water pollution.

The findings from the U.S. Government Accountability Office come in the wake of reports earlier this year that contamination was found in water in or at dozens of military bases.

The report found 77 military installations informed the Defense Department of violations, while a remaining 16 bases had yet to reveal their compliance standings.

“One of the things that stood out most is generally the installations are pretty close to being in compliance,” said Brian Lepore, GAO’s director of defense capabilities and management.

However, concerns remain that polluted water in and around military bases could continue to be an issue, according to the report released Wednesday.

An estimated 3 million people in the United States receive drinking water from Defense Department public water systems, which must comply with U.S. Environmental Protection Agency and state health-based regulations. The report released Wednesday was ordered under the 2017 National Defense Authorization Act, which assigns funding and policy standards for the Defense Department.

Another water contaminant found in the water, perchlorate, is a chemical found in rocket fuel.

The military is working now to find alternate firefighting foam without PFOS and PFOA, but haven’t found one yet, Lepore said.

“The biggest thing left to do is to try to solve the question: Is it possible to develop firefighting foam that meets DOD performance standards and doesn’t contain PFOS or PFOA?” he said. “That’s the biggest, outstanding thing.”

The Defense Department, for now, has initiated actions to address the concerns with its firefighting foam, restricting the use of the foam and funding new efforts to use foam without the contaminants, the report states. Also, the department has shut down wells, provided alternate water sources or installed water treatment systems at 11 military installations.

The report set out five recommendations for the Defense Department to improve its reporting and follow up on those findings when it comes to compliance with health regulations.

Among the recommendations, the agency said the department officials should coordinate to clarify their reporting requirements. Also, the report suggested the secretaries of the Army, Navy and Air Force should boost understanding and command reporting requirements at its installations, which could be done through better communication and training.

Executing these recommendations, and better reporting requirements, should go a long way in addressing the concerns of polluted water at military bases, the report suggested.

The department “has not internally reported all data on compliance with health-based drinking water regulations or used available data to assess compliance,” the report said. “Until DOD takes steps to increase the clarity and understanding of its internal reporting requirements, it may not have the data it needs to fully oversee compliance.”