Who wants to become Afghanistan's next president, anyway? 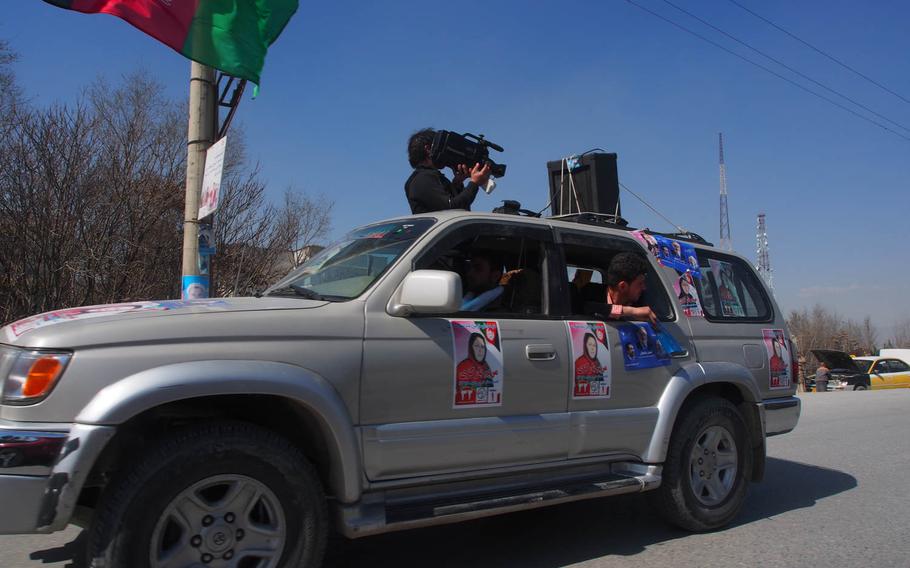 A campaign convoy drives through Kabul. In the run-up to Saturday's presidential election in Afghanistan, supporters have plastered their cars with photos of candidates and attended massive rallies throughout the country. (Heath Druzin/Stars and Stripes)

A campaign convoy drives through Kabul. In the run-up to Saturday's presidential election in Afghanistan, supporters have plastered their cars with photos of candidates and attended massive rallies throughout the country. (Heath Druzin/Stars and Stripes) 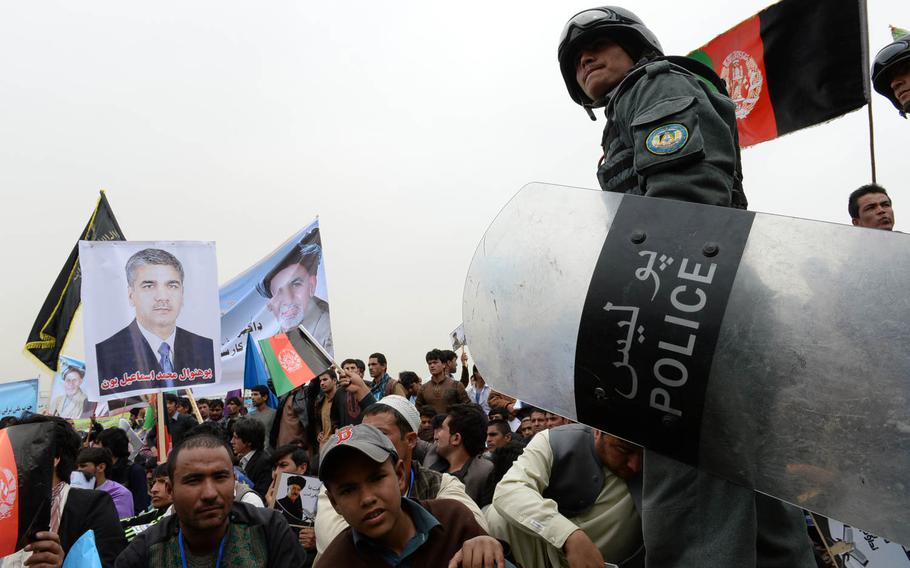 An Afghan riot police officer looks over the crowd at a rally for Afghan presidential candidate Ashraf Ghani in Kabul. Rallies frequently attract thousands of people and can become rowdy as spectators jostle to get closer to the candidates. (Josh Smith/Stars and Stripes) 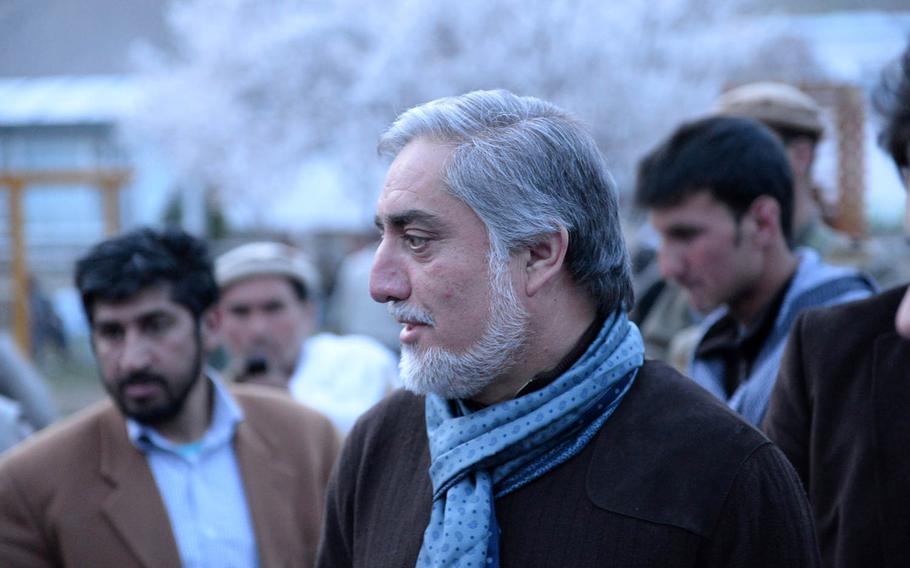 Afghan presidential candidate Abdullah Abdullah speaks to supporters at his compound in the Panjshir Valley after a campaign rally on March 31, 2014. (Josh Smith/Stars and Stripes) 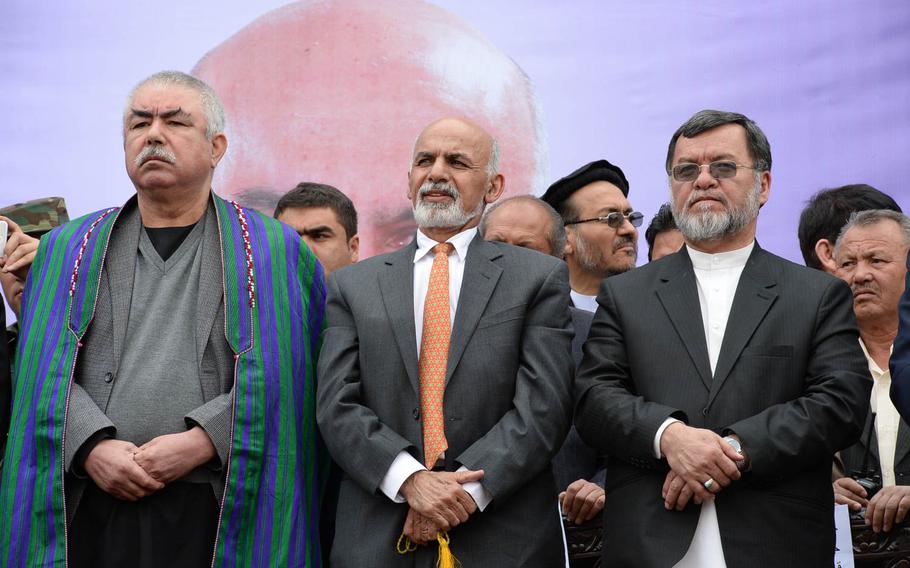 Afghan presidential candidate Ashraf Ghani, center, and his running mates stand for the national anthem at a rally in Kabul on April 1, 2014. (Josh Smith/Stars and Stripes)

KABUL — Long hours, intractable problems after 35 years of war, a raging insurgency and the very real possibility of assassination — it bears asking, why would anyone want the job of president of Afghanistan?

“This is a time when foreign troops are leaving, international assistance will decrease dramatically, Afghanistan’s economic problems will become much more, the drugs trade and other criminal activity will worsen, and security will worsen,” said Ahmad Majidyar, a research fellow at the American Enterprise Institute and a frequent adviser to the U.S. Army. “But if you see it from the view of Afghans, they are much more optimistic about their future than people here in the West.”

Only time will tell if that optimism is misguided. The last time foreign troops left Afghanistan, the new Soviet-backed president, Najibullah, spoke of a new beginning and offered reconciliation to his enemies. He ended up castrated, dragged to death behind a truck and his blood-soaked body hung on public display.

Even if history does not repeat, there’s no dout that president of Afghanistan is one of the most dangerous jobs in the world. President Hamid Karzai, who has led Afghanistan since the 2001 U.S.-led invasion to oust the Taliban, has been the target of multiple assassination attempts and plots. Whoever succeeds him is likely to become more of a target with the withdrawal of NATO troops, who have had a large role in protecting the president.

Of course, there is more that goes into the calculation of running for office in Afghanistan than a sense of duty or patriotism. There’s power, sure, adoring crowds are attending pre-election rallies by the tens of thousands. But there’s also the lure of becoming the leader who takes the country from chaos to stability and rights a ship that many feel Karzai has left listing at a critical moment.

There are potentially more sinister reasons, too: In a country that has ranked last on Transparency International’s corruption index for two consecutive years, the post also offers the opportunity for the winner to become very rich. Though the presidential salary is a meager $525 per month, Karzai and his family are thought to have amassed a considerable fortune during his time as president.

What motivates the major candidates and how that plays out when one of them takes office could be key — both to Afghanistan’s struggle to emerge from three decades of non-stop war as a stable, democratic nation, and the legacy of the U.S.-led military intervention in Afghanistan, which has dragged on for 12 1/2 years and become deeply unpopular among Americans.

With Karzai constitutionally banned from seeking a third term, this election marks the first democratic transfer of power in the country’s history.

“It’s hugely important,” said Kate Clark analyst with the Kabul-based Afghanistan Analysts Network. “Hopefully it will institutionalize the idea that you have political change without assassination, revolution or war.”

Eight candidates are competing for the task of leading Afghanistan, though only four are seen as having a chance at victory: Abdullah Abdullah, the runner up to Karzai in the bitterly contested, fraud-marred 2009 contest; Ashraf Ghani Ahmadzai, a technocrat and former finance minister; Zalmai Rassoul, former foreign minister and Karzai’s presumed favorite; and Abdul Rasoul Sayyaf, an Islamist and former warlord accused of war-time atrocities who has tried to remake himself into a more moderate candidate.

Stars and Stripes reporters spoke to either the candidates or officials from all four campaigns about their reasons for running, and their answers were similar: They said they are running for the good of the country and out of a sense of patriotism and duty.

“One has to take on challenges in this country in order to overcome those challenges,” Abdullah said. “Yes, life would be much easier if somebody didn’t make all these efforts and take care of their personal life rather than trying to serve the people. It’s a very challenging task.”

“As an Afghan or as a resident of a country, you are supposed to work for the good of you country in order to ensure a better future, a better tomorrow,” he said.

Some analysts, though, take a dimmer view of their motivations.

“(The candidates) don’t understand that being a president is a very hard job and you will have to deal with a lot of problems in this country because there is still bloodshed,” Afghan independent political analyst Mohammad Younis Fakoor said. “These people just think they will have power and grab a lot of money and that’s why they are running. But after one of them wins and inherits a water bucket with 35 holes, I don’t think he will be able to fix it and he will suffer.”

Despite the deeply entrenched problems in Afghanistan, the candidates attribute much of the mess to Karzai’s mismanagement and acrimonious relationship with the West, said Majidyar, the American Enterprise Institute researcher.

“They think the problems are due to Karzai’s incompetence and they believe that if they are elected they can do a better job and steer Afghanistan toward stability,” he said.

That desire to be in politics seems to be spreading.

Graeme Smith, the International Crisis Group’s top analyst in Afghanistan has spent years in Kandahar province, where being an elected official is especially dangerous. He says not only are more Afghans clamoring to get into politics but that in districts where elections are largely bought, the price per vote is actually going up.

“So I asked (Kandaharis), ‘Who not only wants to become a politician, but pays good money to become one?’” he said. “And they said, ‘Well, these people believe that the state will survive.’ It’s a calculated bet with tens of millions of dollars on the line, and in some cases their lives. Afghanistan has never been for the fainthearted.”

Like most elections, behind the scenes there has been plenty of deal-making. Major endorsements are rewarded with promises of Cabinet posts or other prominent positions, especially those that are potentially lucrative. Promises of money or projects to certain tribes can deliver whole districts to a candidate.

In Afghanistan, the concept of a “free and fair” election means “free and fair enough.” There will almost certainly be blatant violations such as vote-buying and ballot stuffing, but also tactics, such as elders guaranteeing votes for entire villages, that would raise eyebrows in the West but aren’t necessarily seen as problematic in Afghanistan. The key is not whether or not there is cheating, it’s what kind, how much, and its effect on the outcome, analysts say.

“Fraud is inevitable,” Clark said. Afghans and the country’s international backers can accept some irregularities, as long as they are spread amongst the main candidates and don’t appear to tip the balance of the election.

“The issue for me is whether it’s blatantly one-sided, if the state machine is used for one candidate and will it be enough to change the election,” she said. “Also, if the results are close, accusations of fraud could cause serious problems with the legitimacy of any new leader.”

Stars and Stripes reporter Josh Smith and Zubair Babakarkhail contributed to this report.