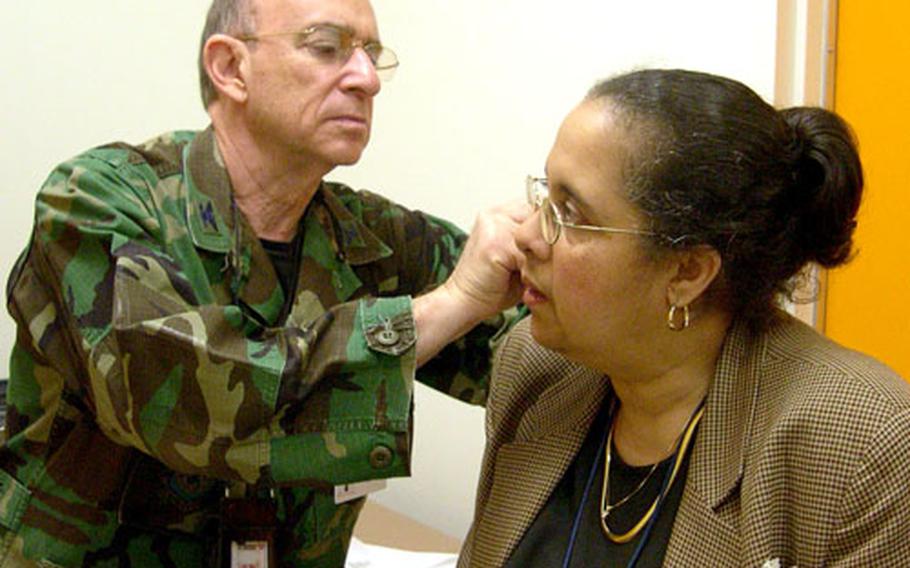 Col. Jeff Gambel admits that sometimes it&#8217;s tough to convince soldiers that the pain in their arms and legs can be eased by sticking needles in their ears.

&#8220;We do end up having to give patients some education along with the treatments,&#8221; said Gamble, chief of Walter Reed Army Medical Center&#8217;s Amputee Clinic and one of several acupuncturists on staff. &#8220;Often patients only know a little about it. But most of ours have been receptive, and we&#8217;ve seen good results with their pain management.&#8221;

Since the 1980s, specialists at Walter Reed have been using acupuncture as an alternative treatment approach, using needles and an intricate knowledge of the nervous system to help certain patients manage chronic pain.

Only a handful of other military medical centers offer the treatments, and Tricare benefits don&#8217;t cover outside acupuncture sessions.

But recently, the practice has gained new attention as physicians have used it to help wounded patients returning from Iraq and Afghanistan deal with the severe pain of shrapnel wounds, deep burns and amputated limbs.

Gambel said over the past three years several hundred wounded servicemembers have used the practice, along with aggressive medication regimens and other physical therapy techniques, in their recovery.

Niemtzow, who specializes in wound-distant techniques, has charted a series of ear and scalp points that can help ease throbbing in an injured limb. In a typical session, he pushes tiny gold pins about the size of a small earring just into a patient&#8217;s earlobe, and leaves them there for several days to suppress the pain sensors.

Treating those areas doesn&#8217;t compromise the relief benefits, he said, but does lessen fears patients might have about sticking a pin near the wound site.

Other approaches include the larger, 6-inch needles most people associate with acupuncture, and placing them one-eighth of an inch or deeper in patients&#8217; skin.

Niemtzow said most of his patients don&#8217;t even notice the slight prick that comes with the visit, and those who do are willing to sacrifice the quick stab for greater pain relief.

Gambel warns that the acupuncture isn&#8217;t a panacea for all pain. About 85 percent of the patients they&#8217;ve treated have reported feeling better, but all of them are also on pharmaceuticals as well. And the group usually only recommends the treatments for patients who aren&#8217;t receptive to traditional pain-management treatments.

But, he said, officials are trying to train more specialists in the hopes of expanding opportunities for treatment at the center.