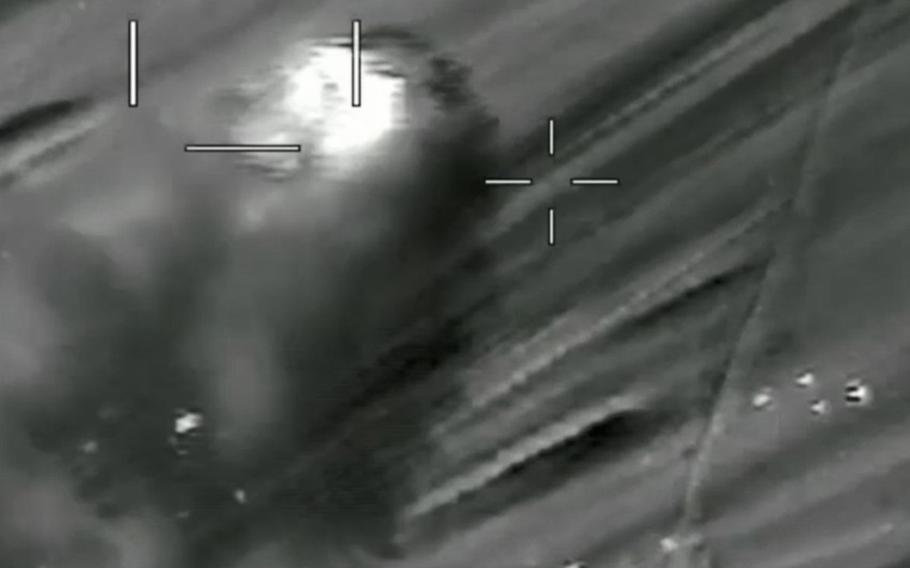 The Taliban’s ''Red Unit'' commander in Afghanistan's Helmand province, Mullah Shah Wali, was killed in a kinetic strike on Friday, Dec. 1, 2017. One of Wali’s deputy commanders and three other insurgents were also killed in the strike. (NATO Special Operations Component)

KABUL, Afghanistan — The U.S. military has released a video of a strike that killed the leader of the Taliban’s elite “Red Unit” last week in Helmand province.

The 15-second black-and-white strike video released Tuesday shows cross hairs centered on a speeding vehicle that suddenly erupts in a white flash and sparks. The flaming vehicle slows and rolls to a stop near the edge of the frame.

The military said in a statement that the strike, conducted Friday in Helmand’s Musa Qala district, killed Mullah Shah Wali, commander of the crack Taliban unit, his deputy and three others. It said the Red Unit is responsible for planning numerous bombings and coordinating assaults against civilians and Afghan and allied troops.

Wali coordinated operations and resupplied Taliban fighters with munitions and explosives throughout the province. Helmand, site of some of the bloodiest fighting in the 16-year Afghan War, is the most productive area for poppy cultivation, which fuels the Taliban’s opium trade and finances its insurgency.

Gen. John Nicholson, the top U.S. commander in Afghanistan, said Wali’s death would disrupt the Taliban’s activities in Helmand, including its narcotics trafficking and its ability to attack Afghan forces.

Trump’s strategy is meant to shift the balance in the war, which has ground to a stalemate in recent months.

The strike video was released by the NATO Special Operations Component Command-Afghanistan, which oversees special operations forces in the country.

The military statement that accompanied the video also announced that Afghan forces had killed Omar Khatab, which it said was the second-most senior leader of al-Qaida in the Indian subcontinent, along with several other al-Qaida operatives, in a series of operations in Ghazni, Paktia and Zabul provinces.

The Taliban have long been linked with al-Qaida, harboring the terrorist group in Afghanistan during until the U.S.-led invasion that ousted them from power in 2001. Khatab is one of the most senior al-Qaida leaders killed in recent years.

Afghanistan’s main intelligence agency said on Tuesday that the operation was a joint mission involving Afghan and foreign forces.

Late Tuesday, Taliban spokesman Zabihullah Mujahid denied any casualties from those operations, dismissing the U.S. and Afghan statements as “propaganda.”

Tuesday, Nicholson said their latest battlefield successes are proof that the U.S. strategy is working. Without close cooperation between Afghan and U.S. forces, he said, “these two operations together would never have been possible.”